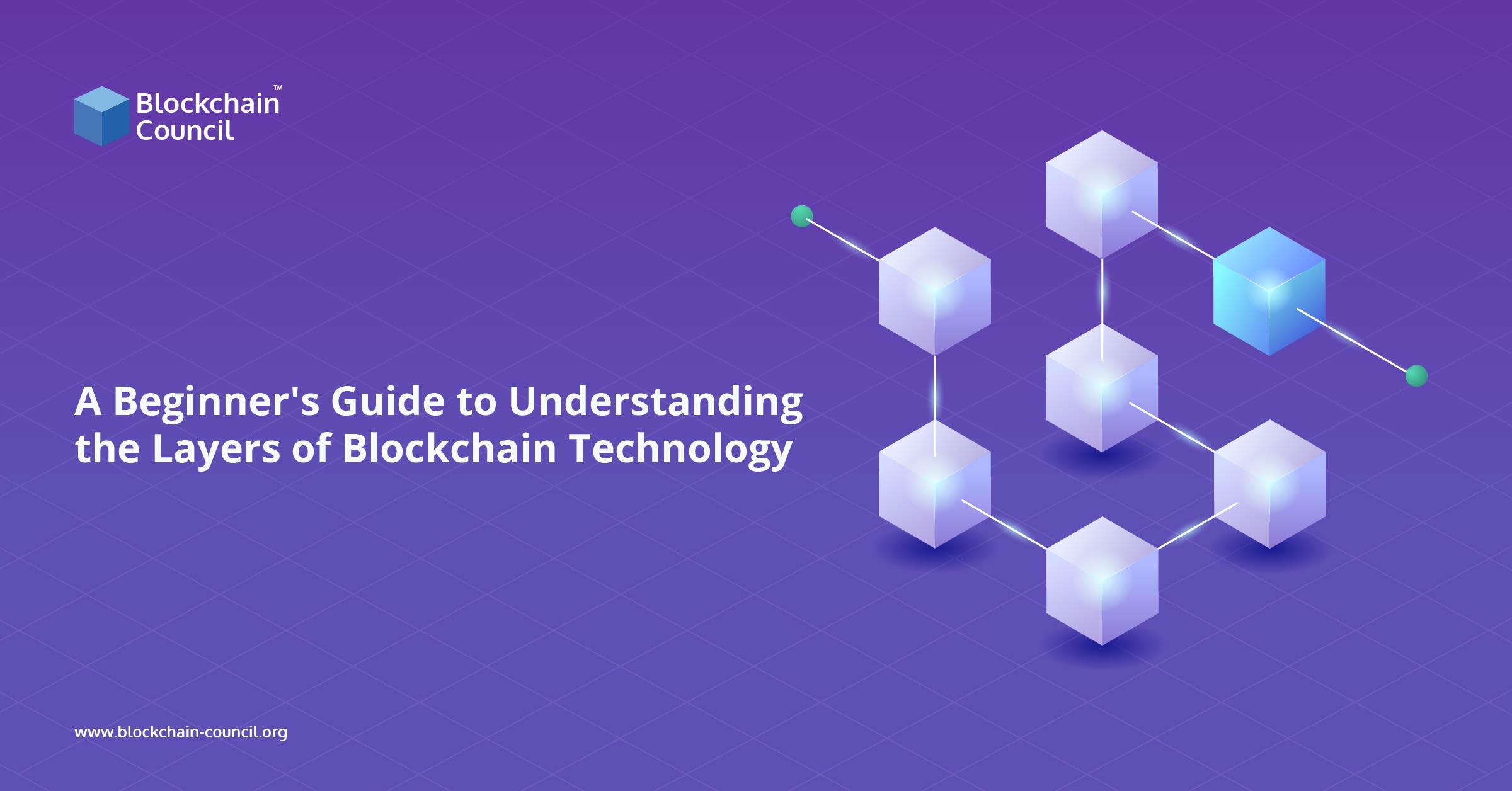 When it comes to Web 3.0 and Decentralized Ledger Technology (DLT), especially in connection with blockchain, you may have heard people talk about the different layers of blockchain. But what exactly are they, and why are they so vital?

In this post, we’ll look at how layers are vital in IT ecosystems and how the Blockchain setup works according to the different layers.

However, because blockchains do not have a single controlling body, all transactions must be safe, and data must be securely maintained on a distributed ledger. The distributed ledger technology (DLT) follows a predetermined protocol, with multiple computers (or nodes) throughout the network coming to a “consensus” to confirm transactional data. As new entries arrive, each node adds, examines, and changes them. To allow this unique kind of transaction authentication, blockchains feature a layered design.

According to some blockchain professionals, there are five layers of blockchain technology:

However, blockchain technology layers can also be categorized as:

So, what are these layers, and what benefits do they serve in blockchain technology? Let’s have a look.

A data server securely backups the blockchain data. Our computers seek access to this data from the server when we surf the web or use any blockchain apps. Blockchain platforms rely on P2P, i.e., peer-to-peer network architecture, where one node connects with other nodes to share data quickly and easily. The client-server architecture is the structure that allows for this data exchange.

It is nothing more than a large network of devices connecting with one another and exchanging data and information. A distributed ledger is constructed in this manner. A node communicates with another device on the network where each node is authorized to monitor the transactional data randomly.

Every transaction is ‘digitally signed’ using the sender’s wallet private key. This key is only accessible by the sender, guaranteeing that the data cannot be viewed or modified by anyone else. The owner’s identity is further protected by the digital signature, which is encrypted, assuring utmost security. In blockchain terminology, this is referred to as ‘finality.’

The data encryption makes it inaccessible. In the case of data access, tampering it is nearly impossible. A digital signature also protects the sender’s or owner’s identity. As a result, a signature is legally associated with the person who signed it and cannot be ignored.

The P2P framework allows several nodes to communicate transaction data in order to reach an agreement on the transaction’s legitimacy. This implies that every node on the network must be able to discover other nodes in order to communicate quickly. This ‘inter-node communication’ is made possible by the network layer. This layer is also known as the ‘Propagation Layer’ since it manages node detection, block generation, and block addition.

One of the most important layers in blockchain functionality, this layer is responsible for transaction authentication. Without this layer, the transaction validation will not take place, thus leading to system failure. This layer implements the protocol, which needs a specific number of nodes to validate a single transaction. As a result, each transaction is processed by numerous nodes, all of which must reach the same conclusion and agree on its legitimacy.

Because no node has exclusive authority over any transactional data, and the role is dispersed. It is also referred to as a consensus mechanism and maintains the blockchain’s decentralized characteristic.

Multiple blocks may be formed concurrently, resulting in a branch in the blockchain due to a large number of nodes processing transactions, bundling them, and adding them to the blockchain. However, a single chain block addition is required at all times, and the consensus layer guarantees that this dispute is addressed.

The constituting applications instruct the execution layer for the proper execution of transactions while ensuring the deterministic aspect of the blockchain platform.

So there you have it: the five layers of a blockchain that support the system. However, if you’ve been reading about blockchains, you’ve probably come across terms like layer-0, layer-1, and layer-2. So, let’s have a look at what these layers are.

Comprising hardware, protocols, connections, and other components that form the foundation of a blockchain ecosystem, Layer-0 acts as a network architecture underlying the blockchain. This layer may be thought of as a “network of blockchains.”

Inter-chain operability is also enabled by Layer 0, which allows blockchains to communicate with one another. It provides a critical backbone for addressing future layer scalability difficulties. Layer 0 often employs a native token to enable participation and development.

Polkadot, Avalanche, Cardano, and Cosmos are some examples of Layer 0.

Layer-1 is responsible for carrying out the bulk of tasks that maintain a blockchain network’s fundamental operations like dispute resolution, consensus mechanism, programming languages, protocols, and restrictions. Layer-1 symbolizes the actual blockchain.

The large number of jobs that this tier must manage frequently causes scalability problems. As more individuals enter a blockchain, the amount of computational power required to solve and add blocks to the chain grows, resulting in higher fees and longer processing times.

The scalability concern is somewhat mitigated by improved consensus techniques such as proof-of-stake and the advent of sharding (the division of computing operations into smaller parts). However, history has shown that they are insufficient.

Ethereum, Binance Smart Chain, Bitcoin, and Solana are all examples of Layer 1.

To enhance the blockchain’s productivity, extra processing power is required. However, this necessitates the inclusion of extra nodes, which clogs the network. Although adding nodes is essential for sustaining a blockchain’s decentralized character, fiddling with scalability, decentralization, or throughput will affect the others on layer 1.

As a result, layer 1 cannot be enlarged without relocating all processing to a second layer created on top of the first that is layer 2. This is made feasible by allowing third-party solutions to be integrated with layer 1.

A new network, Layer-2, revamps Layer-1 and manages all the transactional validations. Layer-2 sits on top of Layer-1 in the blockchain ecosystem and constantly exchanges information with it. However, Layer-1 is only responsible for managing the addition and creation of new blocks to the blockchain.

For instance, consider the Lightning Network as an example of a layer 2 blockchain deployed on the Bitcoin blockchain.

The last layer of the blockchain ecosystem and the one visible to the human eye. Layer-3 is the one where participants will eventually interact with the user interfaces (UI). When working with L1 and L2, this layer aims to give simplicity and ease.

L3 not only provides UI, but also utility in the form of intra- and inter-chain operability, such as decentralized exchanges, liquidity provisioning, and staking applications. Decentralized apps (dApps) are a type of layer 3 interface that provides real-world applications for blockchain technology.

One of the reasons why widespread crypto adoption is now unattainable in the blockchain sector is scalability. The desire to construct blockchain technology will rise in conjunction with the demand for cryptocurrencies. Since each level of the blockchain has its own set of restrictions, the only way to address the scalability trilemma is to build a scalable system.

Because the first layer serves as the foundation for all decentralized systems, it is crucial for the blockchain ecosystem. Layer two protocols solve the underlying blockchain’s scalability difficulties. Unfortunately, the bulk of layer three protocols (DApps) only run on layer one at the moment, disregarding layer two. So it’s reasonable if these systems aren’t performing to our expectations.

The creation of real-world blockchain use cases relies heavily on layer three apps. As a result, they will not capture nearly as much value as the underlying blockchain, in contrast to traditional networks.

Blockchains are currently extremely sophisticated and still in their budding state. Therefore, it will take years to complete blockchain development.
However, breaking down the many underlying components that make up a blockchain into technical layers might help to comprehend the concept better.