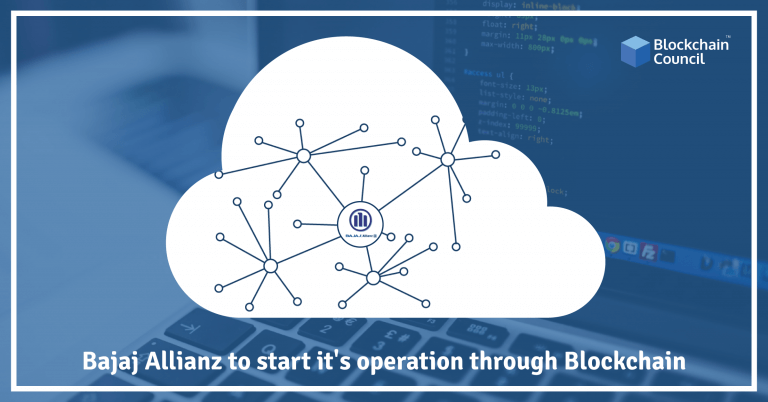 Blockchain has created a fervour in the market, and you can find most of the companies taking a step towards the use of this technology. Whether it is healthcare or shipping, Blockchain offers benefits to all and that is a reason and will inevitably become a technology of future.

An important question that arises here is why companies are entrusting this technology so much, the answer to this is, that Blockchain offers a decentralised platform which culminates in need of having a third party involvement. However, if we have a look at the current system, then you may see that most of the trading and transactions that take place to involve the presence of third-party validation. Moreover, every data is stored in a repository which is centrally controlled and hence can be easily hacked. On the other hand, Blockchain offers a remedy for all these problems. In this blog, I will be highlighting, How Indian Insurance Company Bajaj Allianz has taken a step forward in the use of Blockchain.

How will Blockchain benefit the insurance industry?

When we talk about the insurance industry then there is a plethora of data which the industry has to manage, and the companies offering these services have to deal with a lot of paperwork, claims, settlement, so on and so forth. What if we can have a system which can streamline all this work and make everything transparent and secure? Well, Blockchain is a solution, which we have been looking for the future. It has everything which is required to make business operations of any industry seamless.

After Bitcoin, Blockchain is all set to create a fervour in the financial situations, healthcare, and logistics industries. The merger of Blockchain and insurance is a topic of discussion amongst the investors, technology providers and other people related to the industry.

The insurance sector is a network of customers and insurance providers. Thus, we see that there are a lot of interactions that happen in the field. With so many people engrossed in one sector, accumulating and managing the data of this entire thing becomes a daunting task. Although, we now have a digitized system that takes care of most of the work, at the same time we cannot ignore the fact that there are incidences of false insurance claims and settlements which sometimes leads to a massive loss to an organisation. The problem doesn’t only persist on the insurance service provider. Instead, the consumer also has to face issues such as claims and payment for losses.

What if we can put an end to all these problems by establishing a transparent system which is easily traceable and also unchangeable. Yes, Blockchain is that one technology which offers helps in this domain. The Blockchain is not substituted for the traditional database; instead, they are internet-based smart databases. This distributed ledger is safer, secured and transparent as compared to the current technology that we are working upon.

Here are the key features of Blockchain which makes it an inevitable technology for the insurance industry:

What is the Bajaj Allianz’s move?

Bajaj Allianz, a reputed insurance company, has to deal with information and large data every day. The company has taken a step forward by making use of Blockchain to settle insurance claims.

Bajaj Allianz will be deploying Blockchain to two of its products namely: Travelers and motorists. With the help of this distributed ledger technology, the company aims to reduce the turnaround time. Bajaj Allianz has come up with Travel Ezee product where Blockchain platform will be used to handle claims and process instant receipt of cash. Its second product, On The Spot, will manage the motor claims where the applications will be settled within just 20 minutes which earlier used to take 5-7 days.

With this move, we can say that slowly companies are heading towards using Blockchain as a part of their mainstream business operations. However, we are still growing at a slower pace. With the use of Blockchain, we can expect new transformations in the industry for good.

It is expected that Blockchain will remove all the barriers, and will secure data, also will create a universal platform which is safe and secure. In simple words, Blockchain is that one technology which the insurance industry had been looking for several years.