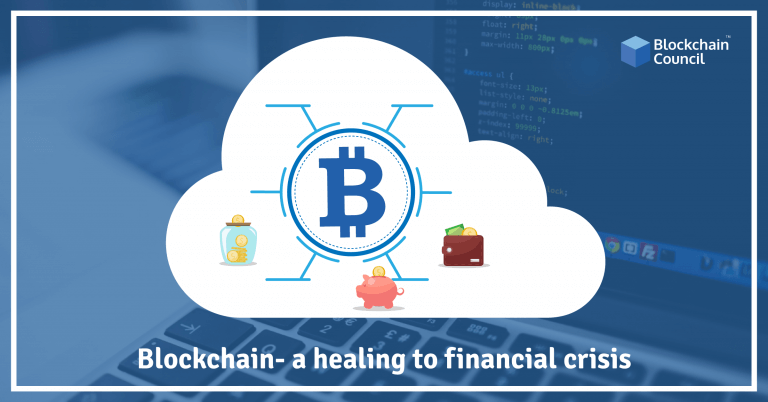 So here we are sitting in 2018, it’s been ten years when we first got to know about Blockchain. The technology came into the picture with the surge of Bitcoin in  2008. Blockchain or Distributed Ledger Technology as we all know is the underlying technology of Bitcoin or other cryptocurrencies. This is a decentralized technology which emphasizes on peer-to-peer transactions nullifying the need of the third party.

It won’t be wrong to claim that blockchain is looked upon as the technology of the future for various reasons, the first and the most important is decentralization. Since blockchain completely culminates the need for having a third party, it becomes an excellent platform for financial transactions which otherwise consumes a lot of time in validation, approval, and processing. Moreover, there are minimal processing fees which are not the case with the current mode of financial transactions.

How can Blockchain heal the Financial Crisis?

Well, to understand how blockchain can be helpful in healing or preventing the financial crisis we first need to analyze the key features of this technology which can prove to be helpful for the banks and other financial institutions. In 2008 the world witnessed the biggest bankruptcies of all time. Lehman Sachs declared bankruptcy, and it spread like wildfire across the globe. Most of the nation’s economy was disrupted leaving to the high rate of attrition and closure of companies. So, can blockchain help in preventing this? This is the biggest question that the companies might be eyeing at the moment.

Let’s admit the fact that one of the primary reason for bankruptcy is lack of transparency. Since blockchain offers transparency and easy traceability, many banking, financial and auditing companies are looking forward to this technology. We all know that the financial crisis of 2008 had a huge impact on the economy of the world and one of the primary reason for this was lack of transparency. Blockchain can prove to be beneficial in this aspect. Since this platform is highly transparent, it can help the authorities to trace the cash flow easily and also find out areas of discrepancies to avoid any problems.

What are the key features of Blockchain that can prove to be beneficial for financial institutions?

Before heading further, let’s understand the key areas on which the financial institutions and blockchain experts should start working to avoid repetition of the financial crisis of 2008 :

Let’s understand how these features can be explored on the ground level:

Thus, we see that the blockchain offers myriads of options to make the banking and financial system foolproof and thus avoiding the surge of the financial crisis that has happened previously. However, an important point to note here is that these processes are still at a nascent stage and we need to work on Blockchain to improvise the areas of improvement.