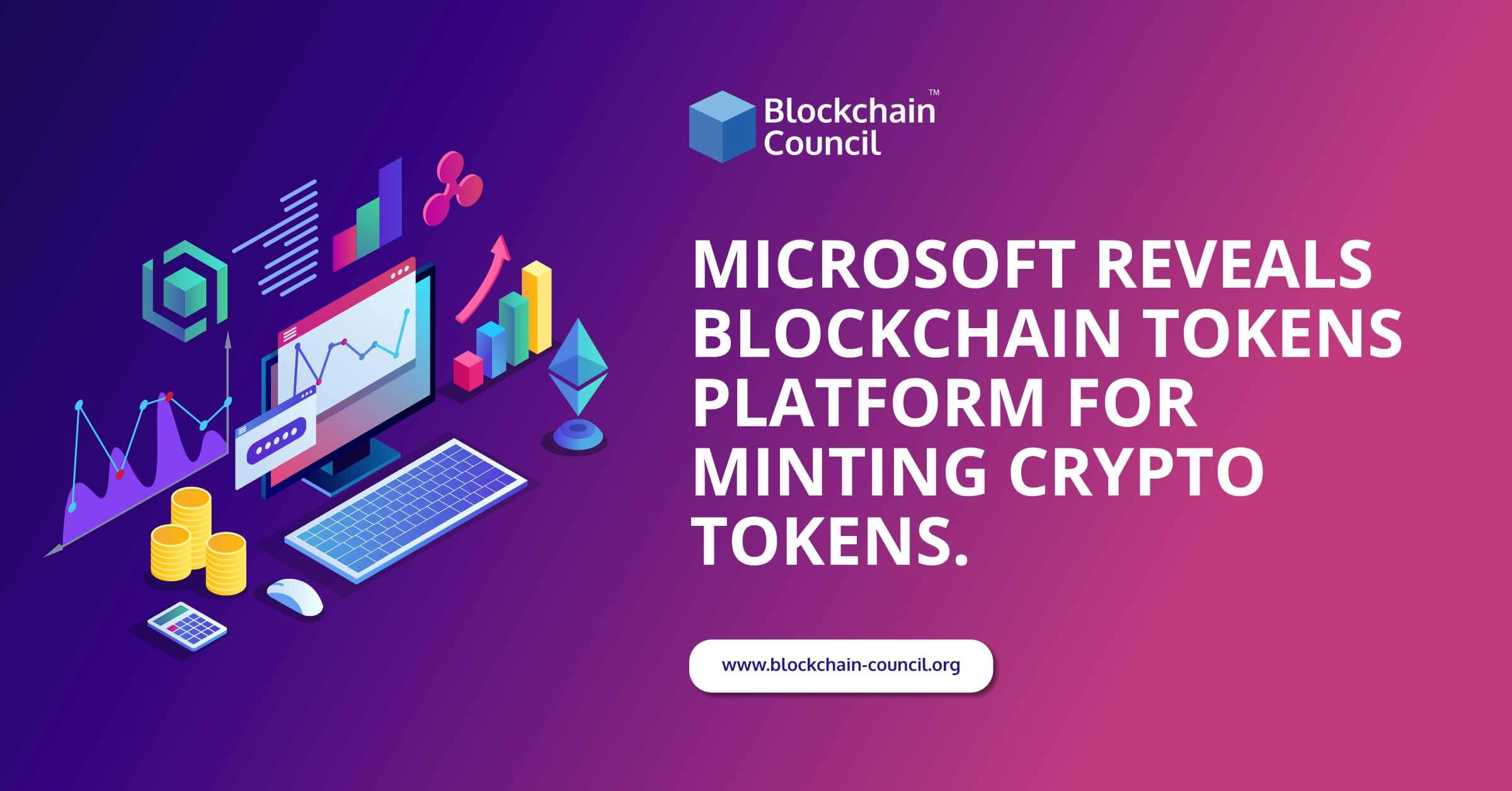 Every year, theAzure’shain developments are only increasing, and very recently, Microsoft has revealed its new token minting platform for its cloud services arm, Microsoft Azure. Software giant Microsoft is known to be one among the first companies to accept Bitcoin for payment. It has now created a mint to help in issuing a wide range of crypto assets.

Let us move on to learn about this in detail.

Microsoft made the announcement about the Azure Blockchain Tokens on 4 November 2019 at the Microsoft Ignite conference held in Florida. Named Azure Blockchain Tokens, the crypto assets mint allows anyone to design, issue, and manage a wide range of assets. It is similar to Bitcoin as it can be proved to exist only in one place at a given time. This makes them more difficult to forge and easier to audit.

While Bitcoin can be compared to fungible assets like money or gold, Azure blockchain tokens come in many flavours like documents, tickets, and non-fungible bonds. The companies that make use of this technology mostly rely on a permissioned version of the Ethereum blockchain. This version uses Microsoft Azure’s cloud computing to achieve consensus on transactions. In the future, developers will be able to use Azure Blockchain Tokens on the distributed ledgers created by some of Microsoft’s competitors or on the public Ethereum blockchain.

As the benefits of using a shared, distributed ledger of transactions depend greatly on the size of the network, Microsoft went ahead and designed Azure Blockchain tokens that will comply with a new taxonomy framework that describes the tokens developed by IBM, R3, JP Morgan, and Digital Asset. This would mean that when the distributed ledgers powering future interconnected network of tokens will be different, the genetic makeup of the tokens might be similar and thus aid in exchange.

Companies such as JP Morgan have already minted similar tokens. Facebook is currently working with companies such as Uber, Spotify, Vodafone, and Microsoft’s work by using the same standard as the other participating blockchain developers. This could pave the way for a veritable explosion of enterprise-grade tokens that work together in an easy manner like they were the accounting system of a single company.

As commented by Marley Gray, the principal architect of Microsoft, “We’re bringing the kind of efficiency you see in Amazon Fresh and Amazon Now, everywhere. Because you’re closing the gap between parties collaborating together and working through business processes that will make everything from delivery services and getting meetings and appointments much easier and automatable.”

It must be noted that most of the Azure Blockchain Tokens are different from the Bitcoin. The Azure Token gets its value on an open market in spite of relying on similar technology. For instance, the e-money token based on the Token Taxonomy Framework (TTF), which was released on the same day as the Azure Blockchain Token, will only have value depending on its underlying assets. This is similar to the Libra cryptocurrency being developed by Facebook. TTF standards for diplomas and insurance documents are tokenized in the sense that the ledger on which they move provides the proof that the asset or contract is only in one place at a given time, and will most likely not have a value that is based on underlying assets or one that adjusts on an open market.

One of the earliest partners with Microsoft to help in developing Azure Blockchain Tokens is Mythical Games. It is based in Los Angeles and uses blockchain for reimagining video game economies. Similar to the Bitcoin, Mythical Games also uses the blockchain to allow game developers to prove beyond the shadow of a doubt that their game currency is scarce, or that digital objects like magical powers, special weapons, or a character’s virtual wardrobe are not being copied and used by other platforms. By limiting the supply, the founders of Mythical Games believe that simplifying the trading of digital objects in virtual worlds, will help denominate the real-world value.
In the words of Rudy Koch, the cofounder of Mythical Games, “We know already that players are enterprising. They already want to do this. “So now, providing a safe place for them to do that, I think it will only get bigger. We’ll see this segment of entrepreneur-type players come out and really dig into this kind of economy.”

The key to Microsoft’s blockchain business model lies in a crucial difference between the way in which public blockchains and permissioned blockchains agree on the transactions that are valid. Public blockchains like Ethereum and Bitcoin are programmed to reward users automatically with cryptocurrency for contributing computing power to audit the blockchains. This makes them less centralized and suitable for counterparties that don’t know or don’t trust each other. On the other hand, permissioned blockchains are audited by centralized services that support cloud computing like Azure. At the core of Azure, Blockchain Tokens is the open-source token taxonomy framework that is available on the GitHub code repository.

To learn about blockchain certifications, check out Blockchain Council.

What is the Salary for a Blockchain Developer in the USA?
Scroll to top