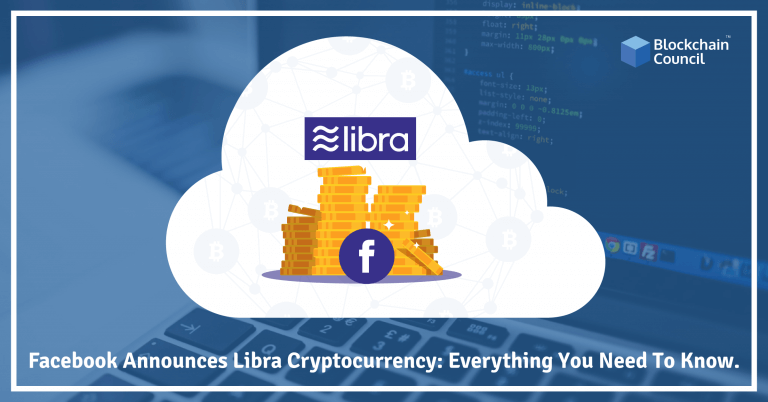 Facebook, the popular American social media platform, unveils its ambitious plans to launch Libra, a digital cryptocurrency, which will allow its billions of users to indulge in financial transactions across the globe. This move will undoubtedly shake up the global banking system. Libra can be a financial game-changer with almost 2.4 billion people using Facebook every month. Libra is regarded as the means to bring together people who do not have access to traditional banking platforms. Today, Facebook has joined hands with 27 organizations from across the globe to launch the non-profit Libra Association and create a new currency named ‘Libra.’ Facebook has played a key role in creating the Libra Association and the Libra Blockchain.

While the currency has been created by Facebook, the Libra Association, commercial firms, and dozens of financial, non-profit companies will be carrying out decisions regarding the ongoing maintenance of the Libra platform. Each of these companies has contributed a minimum of $10 million to the venture. The company now has more than $10 million to contribute towards the new currency. Some of the major players involved are PayPal, eBay, Mastercard, and Coinbase. Ride-hailing startups such as Uber and Lyft, non-profit financial organizations such as Women’s World Banking, humanitarian aid group Mercy Corps, and micro-loan platform Kiva are also joining the Libra Association.

As claimed by Facebook, the foundation will have its headquarters in Geneva and it will function as an independent entity and will not be tied to governments and the company. In a report outlining how the new cryptocurrency would function, Facebook commented that it aims to foster more access to “better, cheaper, and open financial services.” To prevent the level of volatility, which is a common feature of the digital currency sphere, Libra has been tied to a combination of global assets. Facebook has developed the Libra currency using its blockchain technology to scale a large number of users quickly.

In a traditional cryptocurrency setting, anyone with computer access was allowed to run and secure the network. But in the case of the Libra blockchain, the access will initially be restricted to a select group of people who will be able to run the software which powers it and verify transactions.

Facebook hopes to launch the Libra platform in 2020 with approximately 100 members of the Libra Foundation. After the launch of the Libra network, Facebook and its affiliates will have the same privileges, commitments, and financial obligations like any other Founding Member. Libra will make use of the same anti-fraud and verification processes used by banks and credit cards and will use automated systems to detect fraudulent activities. Facebook also promised refunds to users if the Libra blockchain is hacked or Libra currencies are stolen from their digital wallets.