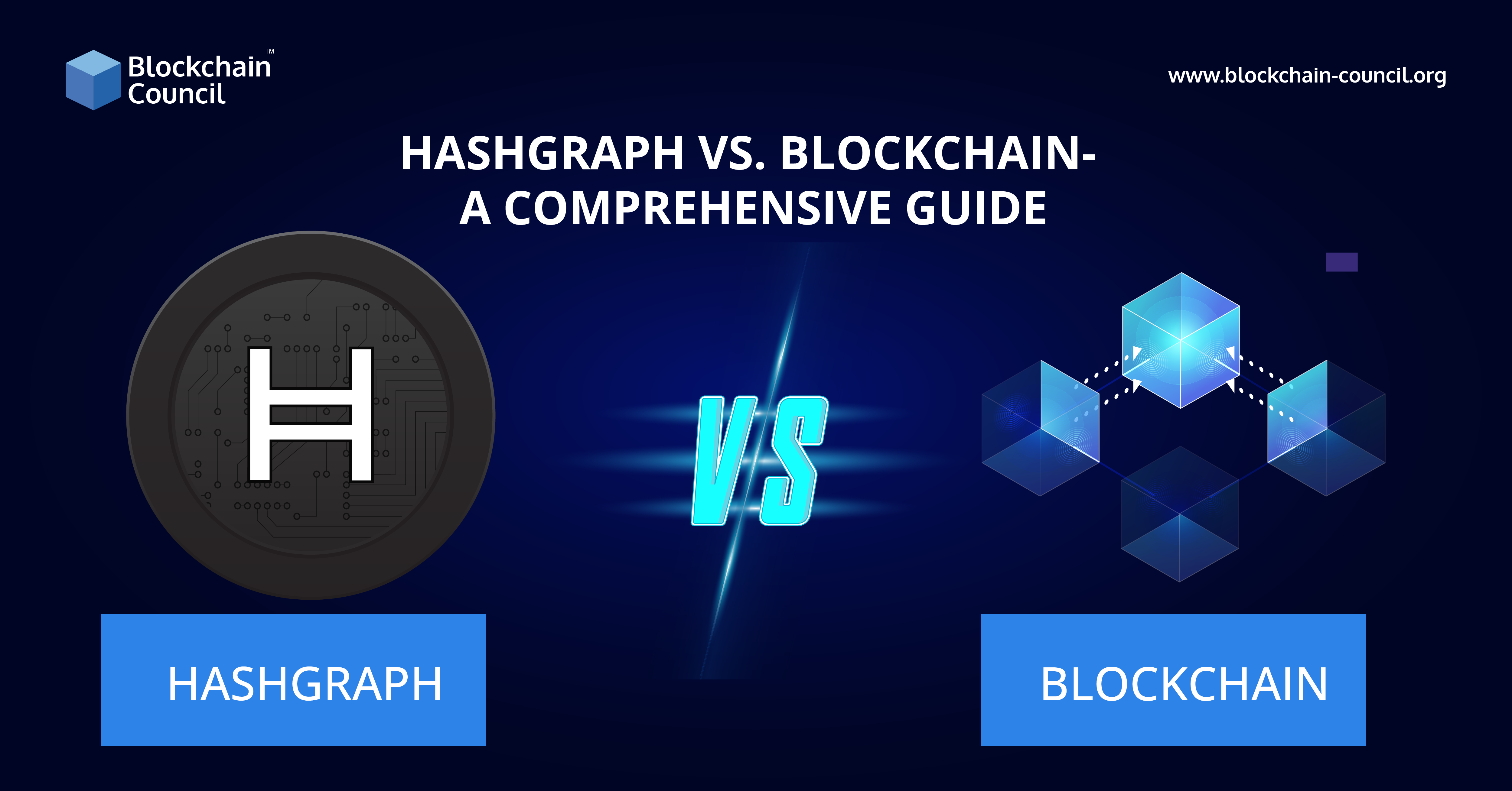 If you’re in the blockchain industry, you know that things are constantly changing. Besides Blockchain, other Distributed Ledger Technologies (DLTs) may provide a superior alternative.

It is a computerized system for documenting the transactions of assets in which particular transactions are recorded simultaneously at several locations. Unlike conventional databases, there is no central data storage in distributed ledgers, and each node records and synchronizes transactions in its electronic catalog.

When it comes to distributed ledger technology, both Blockchain and Hashgraph have advantages and disadvantages.

A new approach to the distributed ledger promises to be more safe, quick, and equitable. So we’ll be comparing these two technologies—Hashgraph and Blockchain—to evaluate how they stack up in the present market.

What Is A Hashgraph?

Hedera or Hashgraph Fast and secure transactions are the goals of the hashgraph, a data information and consensus technique that uses notions like “gossip about gossip” and “virtual voting.” It promises to fill in the voids created by the blockchain technology revolution. Peer-to-peer technology removes the requirement for any transactional infrastructure altogether.

It’s the next generation of blockchain, and it has the potential to overtake the current generation if it can demonstrate its value and validity.

Rather than using miners to verify transactions, Hashgraph employs a directed acyclic graph, which assists in time-segmenting transactions without splitting them into blocks. Nodes in the network communicate using the “gossip about gossip” protocol. As a consequence of the nodes sending data to random network members, all network members have access to the same information.

A cryptocurrency created exclusively by Hedera Hashgraph is known as HBAR. Decentralized payment systems, micropayments, and network security are some of the uses of blockchain technology.

What Is a “Blockchain”?

It’s a decentralized distributed ledger system that keeps transactional information in blocks and makes them available to users all over the world through the network.

An irreversible record of transactions is created by this method. It is possible to trace the ownership of a document in a blockchain because it employs cryptography to encrypt the data. All blocks are time-stamped because of the sequential nature of the transactions. Smart contracts allow companies to define criteria for automated transactions, which are only triggered when certain circumstances are satisfied.

The database is immutable, which implies that records can’t be modified or destroyed once they’ve been recorded since the technology only supports the append-only technique. Voting, supply chain management, and the banking and financial sectors benefit from this trait since they demand immutability.

Coins like Bitcoin and Ethereum are built on blockchain technology, a kind of distributed ledger initially developed in 2009.

As an open-source DLT platform, Blockchain has a large community of developers working on cryptocurrencies and utility tokens. After establishing their quality, several blockchain advocates have gained the confidence of institutions and emphasized the blockchain’s decentralized character.

But Swirlds owns the patent for Hashgraph, which is based on a proprietary algorithm. To prevent new entrants from bypassing the Swirlds checkpoint.

Hyperledger and other blockchain platforms like Ethereum and Corda may speed up transactions on the blockchain by implementing their own protocols. Hashgraph, however, can process between 100 and 10,000 transactions per second.

Hashgraph is regarded as 100% efficient using the block technique since it does not encounter any issues. All occurrences that are gossiped about to the network are held in reserve so that no resources are squandered.

Depending on the kind of encryption and currency, several consensus techniques are used on the blockchain.

For network consensus, Hedera Hashgraph employs “virtual voting.” As it is capable of providing low-cost and high-performance without failure, it does not need the use of any additional algorithms. In addition, it doesn’t need a lot of computing power or electricity.

While Hashgraph’s efficiency, speed, and other attributes are undeniable, the platform has not yet gone live. Consequently, specialists are unable to assess its actual potential.

As a result, until Hashgraph is publicly available and its implementation possibilities are evaluated, we cannot examine the claims it makes. Only theoretically decentralized, the outside authority still controls Hashgraph, even though it purports to be decentralized.

Hashgraph can only keep track of a limited number of transactions; therefore, it cannot be found if a record has a lengthy history. Despite this, blockchain has been around long enough to demonstrate its promise, and numerous industries have reaped the benefits of its unique attributes. As a result, it beats Hashgraph since it doesn’t have the issues that Hashgraph has.

As a result, it’s clear that blockchain is here to stay and will have a promising future. A number of firms are exploring blockchain integration as a method to take advantage of the technology’s many advantages.

The technique used by Hashgraph and blockchain differs significantly. Blocks of data are stored in a linear fashion on the blockchain. Appending works well, but it’s not always the best option to implement blockchain solutions.

Directed acyclic graphs are used to store and retrieve information in Hashgraph. DLTs are really decentralized since each node has its own copy of the ledger.

The security of data saved and transferred on the blockchain network is ensured by the use of cryptographic algorithms unique to the blockchain.

Malicious actors are unable to alter the integrity of the data since the digital blocks are completely tamper-proof. A tampered signature alerts the nodes to a potential security breach or malicious behavior.

Because of Hashgraph’s Asynchronous Byzantine Fault Tolerance (aBFT), bad actors are kept at bay. Regardless of the presence of hostile actors on the network, the technique ensures that no data will be tampered with.

Like a block on a blockchain, a transaction can never be modified or updated after it has been completed. Hedera Hashgraph, however, has made a minor adjustment to the way they implement aBFT.

A leader format is not used in the consensus procedure to prevent DDoS assaults from disrupting the network. We believe that both Hedera Hashgraph and Blockchain have something to contribute.

If you’re looking at the adoption and development stage, Hashgraph falls short of blockchain. First-to-market advantages accrue to the blockchain, which is now over a decade old. Ethereum, which allows decentralized apps (dApps) and smart contracts (smart contracts), is the latest effort to improve the system. NEO, VeChain, and other specific blockchain solutions have also emerged.

In contrast, Hashgraph’s adoption rate is nothing near that of blockchain. As a first step, the invention has been patented. Hedera Hashgraph, the open-source version, is still under construction.

At the time of this writing, it is being utilized by over 300 organizations, which may sound like a lot. Still, it pales compared to the number of businesses using blockchain technology.

The blockchain is less equitable than other cryptocurrencies when it comes to miners and users. The miner has greater control over which orders are processed, how they are processed, and even the ability to halt transactions.

Consensus time-stamping ensures that no one is harmed by the order in which transactions are completed. On the other hand, fairness is a messy idea that isn’t clearly defined in the Hashgraph whitepaper. Comparing Hashgraph versus Blockchain is one of the most crucial components of the comparison.

The Hash Graph’s Advantages Over The Blockchain

Hashgraph is also a distributed ledger system that uses the data as mentioned earlier format and a more robust consensus method that provides the advantages of blockchain without its drawbacks.

No Proof of Work or Leader Based Systems are required for the Hedera Hashgraph algorithm. With no single point of failure, it’s a low-cost and high-performance solution.

The Hedera Hashgraph can handle tens of thousands of transactions per second with exponential information flow.

Furthermore, Hedera hashgraph is more equitable than blockchain since miners may determine the order in which transactions are processed, delay them, or even prevent them from entering the block. An individual can’t change the sequence of transactions in Hashgraph because of the consensus of timestamps used.

Despite its potential, hashgraph has significant drawbacks. So far, the technology has only been used in private networks with limited access. Nodes near each other in the Gossip about Gossip method may be malevolent, which might block information from being sent to other nodes.

However, its true potential and efficacy will be seen once it is published on a non-permission-based network like the Hedera Hashgraph.

It is believed that Hashgraphs hold the key to solving the current Blockchain development issues. Essentially, it has the power to turn the economy on its head. That being said, claiming that Blockchain is superior to Hashgraphs is a long shot. Hedera Hashgraph is still in its infancy compared to Blockchain in terms of maturity and use cases; thus, it’s premature to say that it will surpass it anytime soon.

As a result, the only way to tell whether Hedera Hashgraph is a substitute for Blockchain technology is to wait until both systems have reached maturity and all problems have been ironed out. After all, it is only then that the real potential of Blockchain and Hedera Hashgraph will be revealed.

We don’t expect Hashgraph ever wholly to replace blockchain as a distributed ledger technology. There are, nevertheless, a number of advantages to employing Hashgraph instead of blockchain technology. Blockchain use is still expanding, and private blockchains have made it more appealing to businesses as well.

A new age is just beginning, and we think that blockchain technology is only the beginning of that new era. There is no need to replace any other technology with Hedera Hashgraph, since it may take hold of the market on its own.

There are a number of concerns with blockchain, but they aren’t enough to make this technology less popular.

Information moves rapidly in Hedera Hashgraph, allowing for millions of transactions per second.

Because miners may determine the sequence of transactions, postpone them, or stop them from entering the block altogether, hashgraph is more equitable than blockchain. Hashgraph, on the other hand, employs a consensus timestamp to prevent transactions from being reversed.

In spite of its potential, hashgraph has significant drawbacks. Private and permission-based networks are the only places where this technology has been implemented to date. It has yet to be put to the test in a public network environment. There is a potential that hostile nodes near a node that is using the Gossip about Gossip approach may block the transmission of information to other nodes.

After releasing Hedera Hashgraph to the public and non-permission-based network, the technology’s full potential and efficacy will be revealed.