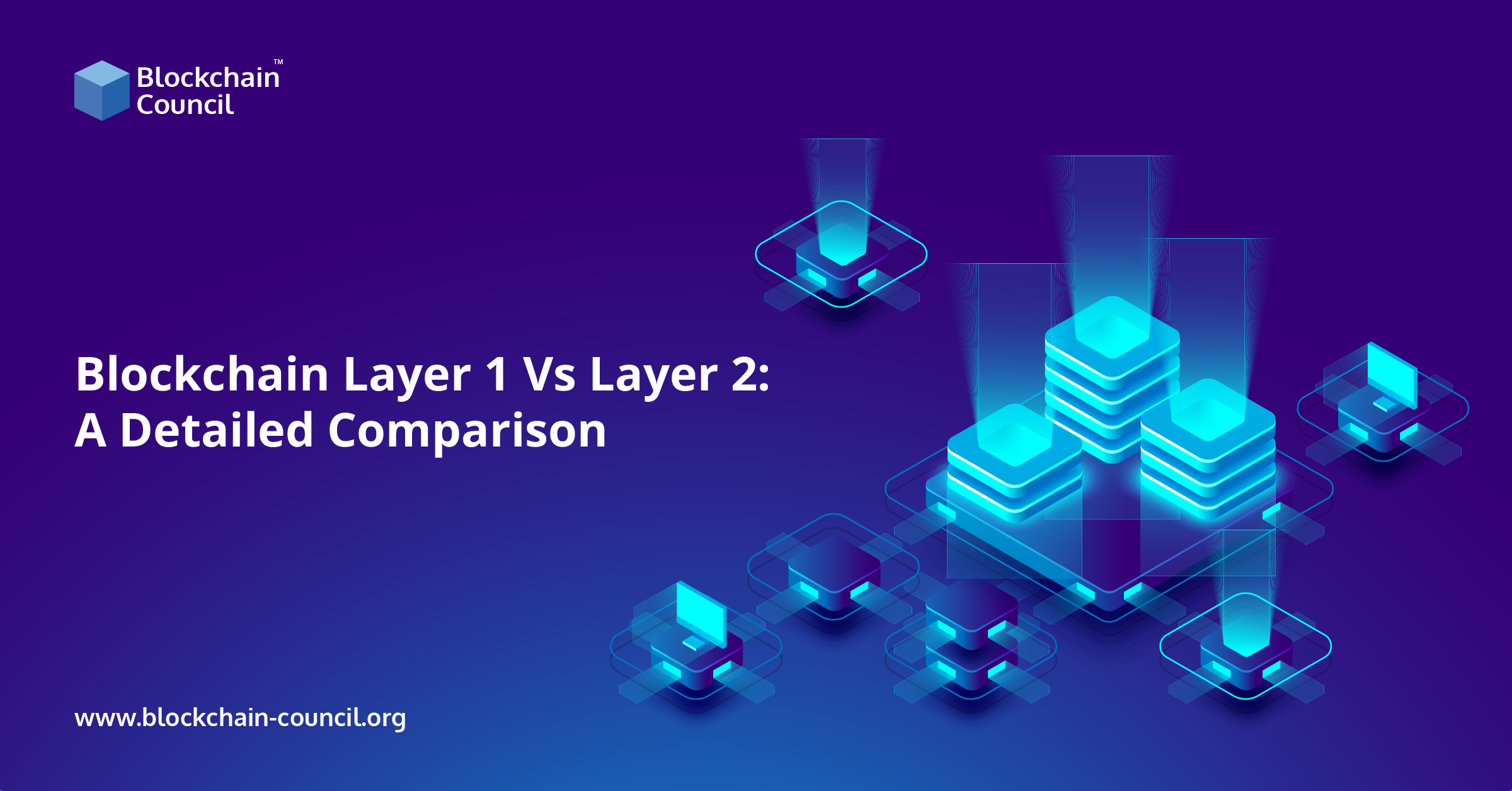 When cryptocurrencies came into the industrial mainstream hub, there was always a skeptical eye on the sector, penetrating deep enough to find the pros and cons of the not-so-conventional technological solution. The central pillar of a crypto network, Blockchain Technology, emerged as the buzzing topic of discussion for bright minds.

These rigorous expeditions helped experts discover the potential and limitations of blockchain technology as a new technological asset. High-end security, transparency, and immutability became the positives while low scalability raised concerns for its wide scale proliferation. Scalability is becoming more critical as blockchain use continues to rise. Once improved, the system throughput rate of blockchain networks can support new applications and a more significant amount of transactions. While discussing the issue of blockchain scalability, the issue of layer 1 vs. layer 2 often garners attention from industry users.

With a constant urge to promote the widespread use of cryptocurrencies, tech experts introduced multiple blockchain layers. Blockchain development helped increase network security and enhance the core recordkeeping process for the users. Interestingly, a third-party solution is often implemented on top of layer 1 to provide additional functionality for scaling. The different layers might be a technical aspect of a blockchain ecosystem, but understanding them can help you understand the DLT channel in a better way. So, let’s try to penetrate deeper into Layer 1 and Layer 2 infrastructures of blockchains and learn more about their characteristics, features, and more critical resources standing distinct from each other.

Improved security, record-keeping, and frictionless transactions are just some of the advantages of blockchain technology. However, scalability remains a challenge for industry experts, where blockchain makes strides across many industrial domains. DLT helps streamline the payment networks and transaction chains by adopting a fully decentralized infrastructure. The scalability of a blockchain channel is that platform’s capability to support the increasing load of transactions and the number of nodes on the decentralized network.

In a typical blockchain process, multiple processes take place chronologically and systematically. These transactions require a significant amount of computing power, energy, and rigorous mathematical calculations by miners. While a blockchain network strives to undertake several transactions simultaneously, they still lack a significant margin from the traditional payment channels. However, the blockchain fails to work efficiently when this transaction load increases. Therefore, to manage the growing load on a blockchain network, increasing scalability has become a vital necessity as it can help decide the future of blockchain ecosystems.

Before determining the difference between layer 1 and layer 2 scaling solutions, it is vital to understand the fundamental cause of the issue. What’s the point of having to deal with this?

A blockchain transaction’s processing power and execution time broadly impact transactions’ authenticity and integrity. The transactions must be accepted, mined, distributed, and authenticated on a node network for a successful streak. Decentralization and security take up so much computing power and time that a Blockchain Development network can’t keep pace with the overflowing demand. As a result, a blockchain with several levels is introduced by the tech experts.

Layer 1 and Layer 2 blockchains are uniquely distinct in more than one aspect, and so one must understand the two in-depth to understand the contrast. Scalability solutions for layer 1 and layer 2 of the blockchain may be better compared if you have a thorough grasp of them through Blockchain technology courses.

Layer 1 blockchain network, as its name suggests, is about the blockchain’s core protocol. It hints at a base network like Bitcoin, BNB Chain, and Ethereum along with their decentralized infrastructures. The Layer 1 solutions can verify, validate, and finalize trades without any dependence on another network. These protocols have their native crypto coins which help to reimburse the transaction fees. In order to increase scalability, layer 1 scaling solutions strive to enhance the blockchain protocol’s infrastructural foundation.

Using layer 1 solutions, you may learn about a plethora of techniques for directly improving the scalability of blockchain networks. The ability to directly alter protocol rules to increase transaction volume and speed may be achieved through layer 1 solutions. Layer 1 scaling solutions have the potential to accommodate more data and users. They often involve increasing the block size or decreasing the time it takes to create new blocks of transactions.
However, the dispute over layer 1 vs. layer 2 would take into account the two most significant layer 1 scaling methods. Layer 1 scalability in blockchain networks can only be achieved by modifying the consensus mechanism and implementing sharding.

Some consensus techniques, like as Proof of Stake, may be more efficient than Proof of Work blockchain protocols in terms of executing transactions. It also helps distribute the network’s burden over a defined number of datasets, known as “nodes,” which are referred to as shards.

The main idea of creating a Layer 2 protocol revolves around the fact that the world of blockchain is full of potential and unprecedented development. Layer 2 solutions are secondary frameworks that are designed on top of an existing blockchain ecosystem. The main objective of these solutions is to enhance the speed of execution for transactions and reduce the scaling complexities prevailing within the sector.

Difference between Layer 1 and Layer 2 Blockchain

The term “layer 1 scaling solutions” refers to the changes that may be made to the blockchain protocol’s foundation layer in order to achieve desired benefits. The block size may be increased to accommodate more transactions, or the consensus mechanism changed to improve performance.

Layer 1 vs. layer 2 blockchain comparisons would also include the fundamental functioning technique or strategy. Changes to the underlying protocol are the primary mechanism for scaling layer 1 blockchain networks. Layer 1 scaling solutions need significant modifications to blockchain systems. It’s not possible to rapidly reduce the amount of adjustments if transaction volume dramatically decreases.

Layer 1 and layer 2 blockchains differ in terms of the sorts of solutions users may derive post their execution. This is the second most significant criterion for reaching our core question. Consensus protocol enhancement and sharding are two significant sorts of layer 1 blockchain solutions to be found. Modifications to block size or creation speed are also included in Layer 1 scaling to ensure required functions. These crucial processes are easily managed by a Blockchain Engineer who possesses deep knowledge about blockchain layers and infrastructure.

Layer 1 networks are the ultimate arbiters of transaction outcomes since they are the only ones who have access to the source of truth. On layer 1 networks, you’ll discover a native token that allows you to access the network’s resources. Layer 1 blockchain networks also include innovation in the design of consensus processes, which is an essential characteristic.

With the inclusion of certain extra characteristics, layer 2 scaling solutions and networks provide the same functionality as layer 1 blockchains. Layer 2 solutions, for example, boost network speed and programmability while lowering transaction prices. Layer 2 solutions. In order to translate transactions back to the underlying base layer, each layer 2 solution uses a different approach.

Limitations of Layers 1 and 2

Blockchain stacking has a number of advantages. For example, If you consider Layer 1 solutions, the key benefit of using them is that developers do not have to make any modifications to the current architecture since just the base layer is modified.

The Layer 2 scaling methods, on the other hand, do not interfere with the base layer protocol. Furthermore, these methods enable users to make several microtransactions without having to pay exorbitant transaction fees or spend time waiting for miner verification to be completed. Both of these blockchain layers, on the other hand, have limits that must be taken into account while using them.

Protocols that are being added to the existing ones

The most difficult aspect of implementing blockchain layers is integrating them into current protocols. Both Bitcoin and Ethereum have market capitalizations in the billions of dollars. Every day, users trade millions of dollars worth of goods and services. Consequently, it is not required to complicate the process with needless coding and experimenting, since this would result in a significant amount of money being spent.

It is said that any blockchain system can only have two qualities at a time, and never all three at the same time. As a result, the existing blockchain technology will always be forced to make a trade-off on one of the key characteristics. Bitcoin is a fantastic illustration of this concept. While its blockchain has been successful in optimizing decentralization and security, it has had to make a trade-off in terms of scalability — and this is entirely due to no fault of its own.

Is there a significant cost difference between the first and second layers of blockchains?

Ethereum Layer 1 blockchain mining and transfers fluctuate from day to day, but they’re often between $50 and $125 on average (USD). Polygon Layer 2 transactions cost roughly $0.05, a factor of 2,000 times less than their Layer 1 counterparts. This suggests that Layer 2 blockchains are more cost-effective than Layer 1, which is due to their more efficient architectures.

What Is the Future of Layer 1 and Layer 2?

Scalability is one of the factors contributing to the inability of the blockchain sector to achieve widespread crypto acceptance at this time. As the demand for cryptocurrencies continues to rise, the requirement to scale blockchain platforms will also grow. Because both blockchain levels have significant restrictions, the answer for the scalability trilemma in the future will be to develop a protocol that can overcome these constraints.

It’s clear that both layers of the blockchain are focused on increasing scalability. The original blockchain technology is tweaked to make it more scalable at the Layer 1 level. To increase the scalability of the blockchain, layer 2 scaling relies on third-party technologies, networks, or protocols. Scalability is simpler to accomplish with the support of off-chain solutions that share the blockchain network’s burden.

It’s clear that each one represents a step forward in the evolution of the blockchain protocol when you look at them both attentively. New solutions like DeFi and NFTs have been attracting more and more consumers to the blockchain ecosystem. As a result, scalability is essential to the long-term viability of blockchains. Learn about blockchain technology and scalability along with their implications to help sail through the dynamics of the sector. The thriving industry leverages access to unprecedented opportunities for investors looking for easy rewards.