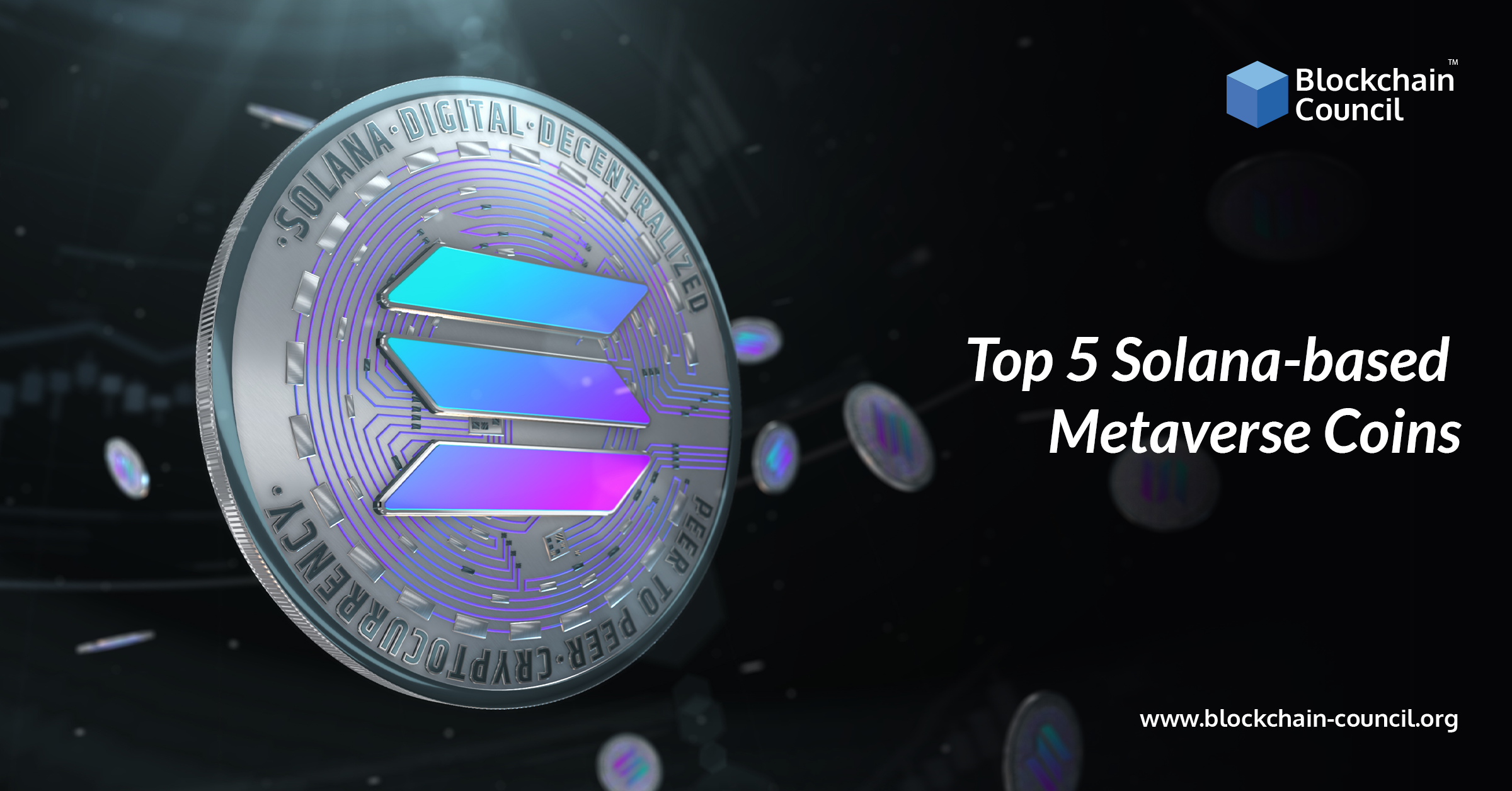 Solana has been a platform that has seen growing popularity recently as more and more crypto enthusiasts seek to explore it as an alternative to the Ethereum blockchain. Solana has a cryptocurrency named SOL and is one of the best blockchains to develop games due to its incredibly high speed of 50,000 transactions per second. Created in 2017 to counter the lack of efficiency in popular blockchains such as Ethereum, the platform currently hosts over 500 different dApps. In the recent months, owing to its unique features, it has emerged as one of the primary competitors to the mainstream crypto platforms such as Etherum and Bitcoin. However, SOL is not the only crypto coin based on the SOL blockchain, and the platform has several other currencies which are used by other crypto platforms that the Solana blockchain hosts.  Today, we’ll take you through the various Solana based metaverse coins that have emerged as key assets in the recent days.

The Metaverse is a network of 3D virtual worlds constructed to build a social ecosystem where users can connect and carry out crypto-related activities. It is built to resemble the natural world and includes several elements inspired by reality, such as real estate, social community, NFT auctions, etc. The metaverse is built on blockchains and is interconnected to enable smooth interoperability among the users of different crypto platforms. So, in simple words, the metaverse is the globalization of all the existent crypto and VR platforms to create one common and connected social ecosystem.

What are Metaverse Coins, and Why are They Used?

These metaverse tokens can be easily used in the entire metaverse and help people to use it while playing games and buying resources in the meta universe. It helps improve the interoperability of the platform by mandating users to trade in a single currency, which is the native token. These can be bought on the platform by using real money or other crypto currencies.  Considering the rise in popularity of the metaverse, metaverse tokens have emerged as one of the hottest assets to invest in.

Solana is an open-source project that uses a new, permissionless, and high-speed layer-1 blockchain to provide users with increased scalability. It has several advantages over traditional crypto platforms, such as –

It utilizes a hybrid consensus model that combines a unique Proof of History (PoH) algorithm with an efficient synchronization engine, forming part of Proof of Stake (PoS). The Proof of History program is basically a sequence of machine algorithms which provides a digital record of the events in a network at a given point in time. This is a platform that can process over 50,000 transactions per second without using any scaling solution.

It can also add a new block every 600 milliseconds to its block chain, which drastically reduces the waiting period between processing a transaction and adding that transaction to the blockchain.

Another advantage of Solana is the meager network fee averaging around $0.00025 per transaction. So, while a $2 million transaction would cost $600,000 on blockchains like Ethereum, it would only cost $20 on Solana since it keeps fluctuating. Apart from SOL, which is Solana’s native token, it also has several other coins on its blockchain.

It also has a thriving community  of millions of members which helps it create an economy of scale and reduce gas fees.  It also helps the ecosystem expand faster due to popular demand and an active team which continuously deploys smart contracts and attempts to improve  the platform.

One of the first examples of a Metaverse on Solana, Synergy Land, is a multiplayer ARPG game developed by Synergy Studio. The game is inspired by several popular games such as Diablo and Path of Exile and uses the Unreal engine to provide smooth gameplay to the players. The game works on the play-to-earned model, where players can earn by simply playing the game.

Players take on the role of different types of warriors who set off on a grand adventure against mighty creatures, using a fully dynamic and innovative spell system that will allow players to combine elements to cast spells creating new beneficial or harmful synergies between them. It will enable users to craft powerful weapons to gain an advantage in PVP combat. The game also has several features in the pipeline, such as –

In addition, it also provides users an ecosystem where they can collect and trade NFTs for additional income.

However, it has no market value since it is still in its development stage and has no traceable tokens. However, Synergy Studios has put the development process on full steam and has already closed the seed round and the initial Synergy NFT sale. So, it is likely that the game will be launched by the end of 2022 itself. Because it is a highly underrated project, now is a beautiful time to explore the possibility of great returns from the game.

Solice is the first cross-platform VR Metaverse built on the Solana BlockChain and is quite similar to Decentraland and Sandbox. The company aims to create a VR metaverse where users can play, build, own, socialize, and monetize their virtual experiences in an immersive way on the Solana blockchain. It allows players to explore the 3D world and invest their capital to buy plots of land. The players also have the feature to develop these plots and sell the same as their own unique NFT. It has also integrated several elements such as –

Another essential feature is its commitment to improving the platform’s interoperability by enabling users to connect and transfer resources between Solice and other platforms smoothly.

Currently, SLC, the native token of Solice, is trading at $1.34 with a 24-hour trading volume of $374,548. While there is no information about the current circulating supply of SLC, the total supply is 400 million tokens.

Solice has also successfully raised $4.3 million through venture capital funding to accelerate the process of building the first cross-platform VR metaverse. Considering the similarities that Solice has with Decentraland and Sandbox, plus the improved efficiency of the Solana blockchain, it is likely to emerge as one of the strongest competitors in this segment in the coming days.

Another emerging metaverse coin is Star Atlas, a blockchain-based strategy game that allows users to explore the space. It also provides a space-themed universe that will enable users to build and upgrade spaceships and explore the metaverse. It also provides users with an opportunity to engage in game mining. It allows players to engage in an action-adventure in the Star Atlas intergalactic ecosystem while earning returns by developing their assets and using them to trade within the game.

While Star Atlas has several smaller games where gamers proceed strategically, it emphasizes the adventure genre. Players can explore and also conquer planets and stars. It also features its in-game currency called ATLAS, with which users can buy space ships and other ancillary equipment.

Further, the game features a marketplace for users to trade their resources. Currently, ATLAS is trading at $0.0252 with a 24-hour trading volume of $7,639,062. It has a stock of 36 billion ATLAS tokens, and 2.16 billion ATLAS tokens are currently in circulation. This takes the market cap of Star Atlas to $282 million and makes it an exciting coin to invest in with tremendous upside potential.

Good Games Guild is basically a hub for games that aims to bloom into the largest Solana metaverse economy. It seeks to do the same by an ambitious plan of sponsoring and investing in millions of players to earn games and their in-game assets. It is a Decentralized Autonomous Organization and focuses on NFTs that users can trade on their platform.

The gaming industry has monetized the games by integrating NFTs. However, it also means a rapid rise in the number of crypto assets. These crypto assets need to be managed and efficiently optimized to ensure profit maximization.

However, there is a lack of projects which allow users to manage their assets and maximize their profits most efficiently. GGG has incentivized this gap by creating a community that aims to find ways to maximize in-game crypto earnings. For example, gamers can now rent out NFTs from the members of the GGG community and use them to and seek community sponsorship to play the games. The community can also operate as an investment fund to buy in-game assets.

Currently, the price of Good Games Guild is $0.8494, with a 24-hour trading volume of $912,045. While the maximum supply of GGG coins is 100 million, there is a lack of information about the current circulating supply. However, Good Games Guild’s big plans are likely to go a long way ahead. So, it might make sense to grab a few coins at a discount.

Afflarium is a massively multiplayer VR-enabled game that operates on the online real-world metaverse and can be played on both desktop and mobile with VR accessories. It is not like the traditional video games as it doesn’t have a set storyline. Players can choose their tasks such as the fight for NFTs, opening a store to showcase products and find customers, or even designing buildings, among other tasks. It brings the necessary elements and stimulations such as –

It helps to create an exciting and engaging gameplay experience. So, users are not restricted and have the freedom to tailor their world for specific purposes. However, it doesn’t mean there is no story mode in Afflarium, as users can create their own set of rules, designs, ideas, or even a completely new game.

Its native currency is Solana-based AFFL. However, due to Afflarium being one of the younger projects on the blockchain, it is not available for users to buy yet, but it is still looking for new users to try out the platform on a pilot basis. Considering that VR-enabled games are rapidly gaining the interest of conventional gamers, keeping an eye out for Afflarium might turn out to be an enriching task.

So, these are some of the alternative Solana-based metaverse coins that hold massive potential and could bring in some good returns if invested at the right time. The metaverse concept has gained rapid significance, with even companies like Facebook choosing to change their name to Meta. There has been an increase in the number of companies expanding their businesses into the virtual world with an aim to profit from the increasing number of users on such platforms.  The rapid rise of users as well as companies seeking to invest in the metaverse has successfully created a symbiotic opportunity for growth in the crypto segment.

So, this is indeed high time to invest in these coins, as the chances are that you would be able to incentivize this booming popularity to earn a stellar return on your investment. However, the crypto market being an unregulated platform, it is essential to do your research before investing in any given currency as it also has high risks. The best way to play this market is to avoid haphazard investments and make wise, well-researched choices for the best returns for your money.