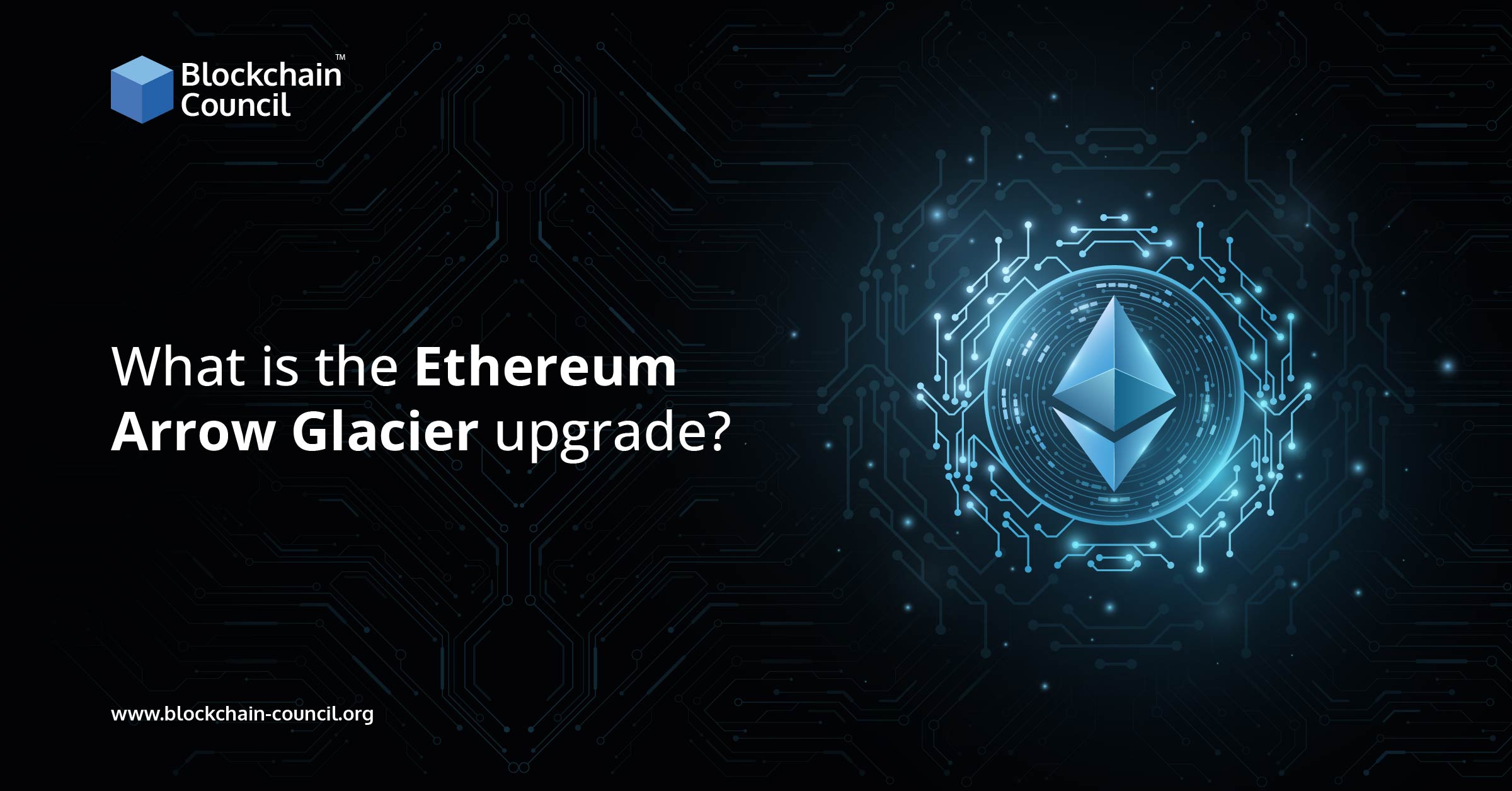 The Ethereum Arrow Glacier Upgrade is a straightforward change that was applied on block number 13,773,000 on December 9, 2021. The postponement of the network’s difficulty bomb will provide the ethereum developers more time to create Ethereum 2.0. Expanding the time bomb is a common feature of Ethereum upgrades. It was formerly slated to coincide with the London hard fork in December 2021, but it is now projected around June 2022.

According to an Ethereum expert, Arrow Glacier is quite identical to the last Muir Glacier modification, which was completed in January 2020 and likewise postponed the time bomb. There is also just one Ethereum Improvement Proposal (EIP) that will postpone the ice age. The difficulty bomb was further extended in the Constantinople, Byzantium, and London versions.

The launch of Ethereum 2.0 is still preparing for its debut. In the meanwhile, frequent upgrades are performed to maintain the blockchain on track. While the Arrow Glacier upgrade may not be obvious to the ordinary consumer, yet it is extremely essential. In fact, without it, the network may become practically useless. Let’s take a glance at why this is occurring and what it means for customers, stakeholders, and cryptocurrency miners, as well as the effect of forthcoming Ethereum 2.0 technology.

The difficulty bomb is a method that forces a proof-of-work (PoW) network (in this case, Ethereum PoW) to cease issuing blocks, turning mining disadvantageous for miners and discouraging users from continuing the chain utilization when it switches to proof-of-stake.

Miners on the Ethereum network are currently spending huge computing power to resolve a math maze, therefore protecting the network against malicious players. The explosion of a difficulty bomb will gradually increase the complexity of these problems, raising the cost or making it impossible to successfully mine a block and making Ethereum certification harder. Therefore, mining on the Ethereum blockchain would be extremely expensive.

Block time will also be prolonged, causing a blockchain ice age (that is blockchain freeze). It’s an exponential curve that was clean and flat for a long time before amping up abruptly when the bomb exploded.

A substantial progress has been made by the Ethereum core developers towards the Merge with client compatibility and Amorpha (a functioning growth technology). Nonetheless, implementing the proof-of-stake modification on the mainnet will take quite some time. As a response, a difficult bomb gets delayed.

Again, when the Merge happens, users will be assigned to authenticate the Ethereum mainnet. Producers will very definitely deposit their income in the new proof-of-stake system once mining is no longer necessary or authorised on the system.

What was the need to introduce the Ethereum difficulty bomb?

This concept of adding complexity to the Ethereum Proof-of-Work main chain came devised with the intention of facilitating the transfer to proof-of-stake during the time period; it also offered an added benefit to encourage existing miners to update their networks. The main goal is to make it impossible for current miners to remain on previous proof-of-work chains.

What are Ethereum improvement proposals?

To optimize the Ethereum network, suggested modifications are reviewed and approved by Ethereum, a council of editors, Ethereum developers, and the Ethereum fraternity. These are, therefore, referred to as Ethereum Improvement Proposals (EIPs).

Anyone can propose an EIP to suggest improvements or alterations to the Ethereum network, yet every request must pass through a meticulous review criteria. EIPs are divided into seven groups which are shown below:

Furthermore, each EIP follows a distinctive EIP structure and handles the unambiguous technical requirements for a particular optimization. Only one EIP, EIP-4345, is proposed for the Arrow Glacier upgrade. It explains why a difficulty bomb has grown in size, giving programmers more time to concentrate on the Eth2 transition.

How will Ethereum’s Arrow Glacier upgrade impact the users?

The Arrow Glacier development will not have an instant effect on the average Ethereum consumer.

Apart from this, there is no modification in network trade times or average prices. Besides this, suppliers and node managers must update their Ethereum customers to the most recent version in order to prevent continuing with the prior division of Ethereum (old fork), which is no longer completely supported by the market.

Despite the fact that the Arrow Glacier update does not resolve Ethereum’s high gas prices or scalability concerns, this is still an essential development.

This would not only ensure that the system remains working and that mass miner capitulation owing to the immense price of mining is avoided, although it will be the final — or third — case in which the difficulty bomb must be delayed.

In the final response, the Arrow Glacier upgrade promises to make Eth2 a reality, with availability expected in the second half of 2022. Hence, is PoS better than PoW? Without a question, yes.

Among the most significant impacts of the change will be higher energy requirements for mining in the network (PoW to PoS). The Ethereum PoS technique will significantly reduce Ethereum’s environmental effect by 99 percent.

What should you mine after ETH goes PoS?

Mining will be separated into smaller, less renowned coins after Ethereum transitions to the PoS consensus procedure. Raven Coin and Ethereum Classic are two such illustrations.

It makes absolutely no difference that neither of the coins described above is very well or commonly utilized on the Ethereum network. What is significant is that, like Ethereum, its coins may be mined using GPU-based mining processes.

Additionally, miners frequently switch from one token to another based on mining mechanics; in order to do otherwise, they should assess numerous currencies each day in order to mine successful ones. Furthermore, they need to keep many wallets to ensure that currencies are kept safe.

Miners may potentially build an Ethereum fork, including Ethereum Classic 2.0, to upgrade the blockchain, which uses the PoW mechanism rather than PoS, and introduce new regulations.

However, Arrow Glacier is not a big modification, yet it is important. Without that, the network would become prohibitively expensive to mine and prohibitively sluggish to utilize. It’s also quite interesting for the Ethereum users. If this is the final expansion to the difficulty bomb, Ethereum 2.0 might arrive as recently as June 2022.