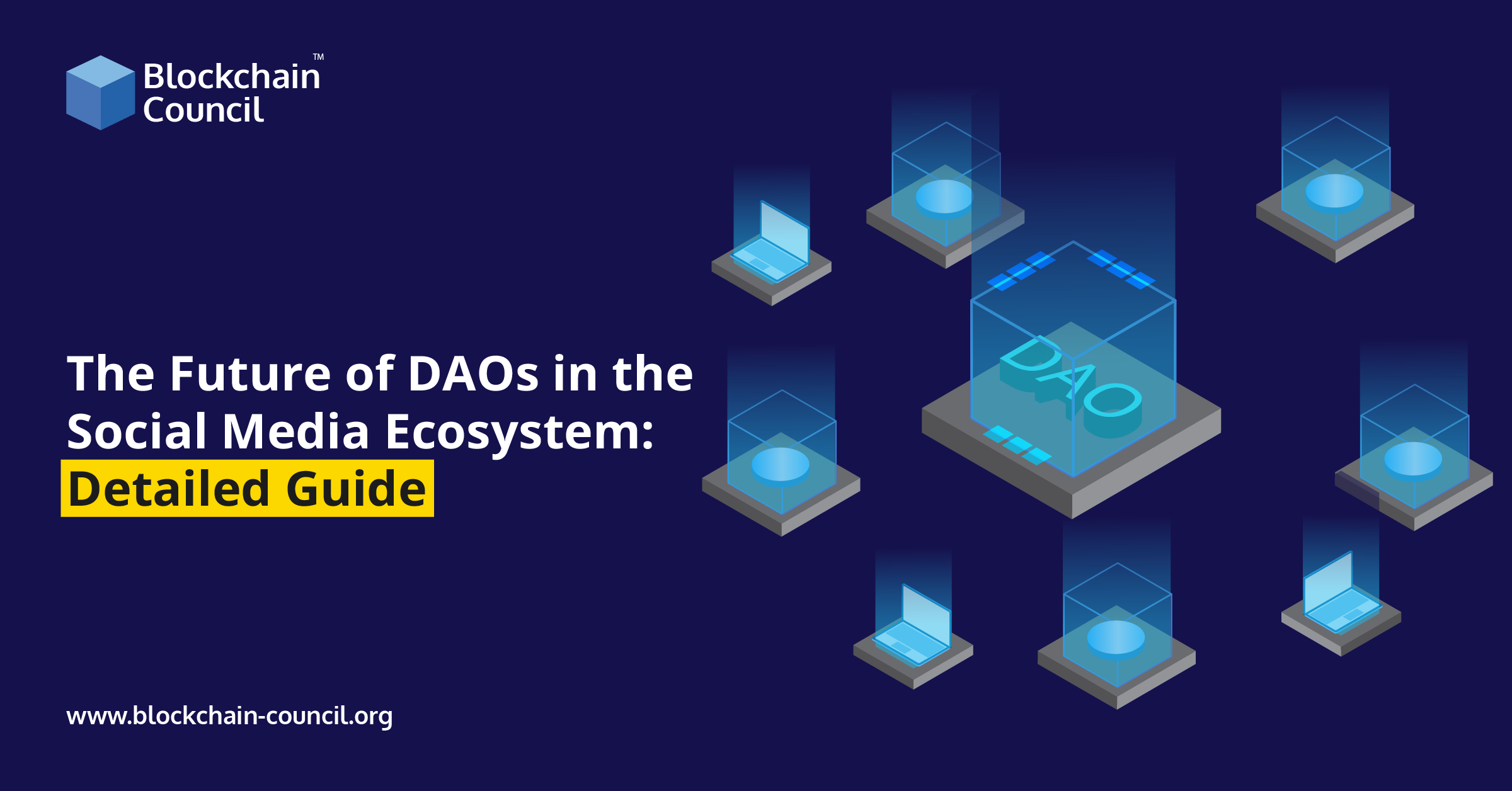 The internet and social media have made it simpler than ever before for like-minded people to interact, regardless of their geographical location. With the advent of digitally native money and banking, a new form of social network has evolved, allowing like-minded individuals to not only interact but also coordinate around the capital. These new networks, like their predecessors, are unfettered by geographic boundaries, capable of growing on a large scale or among a small group of select individuals.

Decentralized autonomous organizations, according to the most optimistic thinkers, can revolutionize how people organize and eventually surpass the size and breadth of the world’s most significant enterprises and even nation-states.

Every technological advancement has altered the way people do business. For example, the internet profoundly transformed the way organizational operations were carried on. First, we got Web1.0 and then Web 2.0, which changed the information interpretation and communication methods. Now, a new shift is on the horizon that promises to alter the way we work once more: Web3.

In many aspects, the Web2 era is the age of social media. The combination of the social graph and the advertising business model generated a robust engine for generating economic value, but it also had a number of unintended consequences.

The World Wide Web’s third generation is known as Web3. It’s based on blockchain technology and cryptocurrencies, with more decentralization, transparency, and shared ownership.

Web3 appears to be on track to change the way we operate. And the decentralized autonomous organization, or DAO, is tasked with leading the charge. However, before we get into what influence DAOs are going to cast on social media, let us first briefly understand what DAOs are.

DAOs, i.e., Decentralized Autonomous Organizations, are software-enabled organizations. They enable individuals to pool resources to pursue a shared objective and share in the value created once those goals are met.

DAOs can be the preferred organizational primitive for Web3 in the same way that the LLC (limited liability corporation) was for the industrial revolution. Whereas companies are based on the historical financial system and managed by legal contracts, DAOs are organized by tokens with their rules recorded in smart contracts and run on open blockchain networks like Ethereum.

The ConstitutionDAO recently collected almost $40 million from 17,000 donors in less than a week in an unsuccessful quest to acquire one of the original copies of the US constitution. In addition, DAOs aren’t connected to a physical place, allowing them to mobilize fast and attract talent from all around the world.

As tracked by deepdao.io, there are over 180 DAOs with $10 billion in assets under control and approximately 2 million members currently. These vary from major DAOs that administer some of the essential crypto protocols to smaller DAOs focused on investing, social networks, journalism, and philanthropy.

Some of the top protocol DAOs are:

Investment and collector DAOs are the second-largest type. These allow people to combine their money in order to invest in certain assets. They range from venture capital investments in DeFi protocols or NFTs to more grandiose endeavors such as purchasing priceless historical manuscripts or even significant sports teams.

Unlike the costly and intricate legal structures involved with a regular venture capital fund, these DAOs provide a fast and simple way of capital generation, similar to other types of crypto crowdfunding. In addition, members may audit all transactions on the blockchain, making these funds more transparent than traditional venture funds.

MetaCartel Ventures, Flamingo, PleasrDAO , and Komerabi are all excellent instances of DAOs pooling resources, making investment decisions collectively, and participating in the upside when those investments grow.

DAOs that provide service DAOs resemble online talent agencies in that they bring strangers from all over the world together to create goods and services. Prospective clients can create bounties for specific projects and then pay a percentage of the costs to the DAO treasury before paying individual participants. In addition, contributors are often given governance tokens, which represent ownership in the DAO.

The major portion of the early service DAOs, including DxDAO and Raid Guild, aim to bring together expertise in order to grow the crypto ecosystem. Other crypto projects and protocols that require anything from software development to graphic design and marketing are among their clientele.

Service DAOs have the potential to revolutionize the way people work by allowing a global talent pool to labor on their own time while also receiving ownership interests in the networks they care about.

Social DAOs are decentralized autonomous organizations (DAOs) that aim to bring like-minded individuals together in online communities organized around a token. Friends With Benefits and its $FWB token are prime examples. Members must fill out an application and obtain 75 FWB tokens to join. Access to a network of notable crypto builders, artists, creatives, and special events is included with membership.

Members are motivated to build a meaningful community by organizing around a token – sharing insights, hosting meetups, throwing fantastic events, and so on. For example, when more people realized the value of joining the FWB group, the token appreciated in lockstep, sending the $FWB price from $10 to $75, and thus the membership cost from $750 to $6,000.

NFTs are also used by other social DAOs to access a larger community. For example, by having a Bored Ape NFT grant, you have access to the Bored Ape Yacht Club’s discord, events, NFT airdrops, and souvenirs. In this situation, the community’s perceived worth drives the value of the NFT collection.

This category of DAOs is still in its early stages, and it will take time to figure out which models work and which don’t, but their fast growth suggests that they offer a strong new type of social organization.

Media DAOs strive to reimagine how content creators and consumers interact with media. These DAOs leverage token incentives to compensate producers and users for their time with an ownership share in a certain channel, rather than relying on advertising-based income models.

The “Let’s Talk Bitcoin” podcast introduced the concept of decentralized media in 2013, but BanklessDAO was a major example in 2021. Bankless is an Ethereum-focused media outlet with a well-received podcast and newsletter. The BANK cryptocurrency was just airdropped by the Bankless team to its audience.

With BANK in hand, users may take an active position in the media outlet and earn more BANK by writing material, doing research, designing graphics, translating articles, and providing marketing services, as well as voting on crucial DAO decisions.

Media DAOs provide a compelling option for realigning the interests of readers and producers at a time when many believe that the existing ad-based media economy is flawed.

Grant and philosophy DAOs, like investment DAOs, aggregate funds and distribute them to diverse causes. The only distinction is that allocations are decided without regard for monetary gain.

Gitcoin is a forerunner in this approach, funding grants for vital open-source infrastructure that might otherwise go unfunded. Uniswap, Compound, and Aave, for example, include grant DAOs that let the community vote on how their treasuries should be used to pay builders and developers to further the protocol.

Philanthropy DAOs are also beginning to develop as a way to rethink how philanthropic donations might be made. For example, Dream DAO used NFTs to generate cash before allowing NFT holders to vote on how those monies should be distributed to the DAO’s objective of funding civic leaders in Gen Z.

Here are several DAO qualities that are most likely to influence the social media business:

Each social media platform has a stranglehold on a vast amount of user data. As a result, both authorities and consumers are becoming critical of this system. Using blockchain technology to ensure data accountability, openness, and ownership can help to alleviate these issues.

When a DAO forms, a social network emerges. A DAO is a collection of people that have banded together to achieve a common objective. They require communication and governance technologies in order to function and collaborate efficiently. DAOs naturally aggregate all members’ contributions, forming a shared social network and allowing social data to be monetized on-chain in a transparent manner.

Today’s social media is centered on user-generated content and the creator economy. However, the platforms that host such activity collect the majority of the revenue it generates. Blockchain tokens have the potential to change this by allowing creators to monetize their following using many of the same methods that DAOs use to reward members for efforts.

Each new network confronts the challenge of attracting the initial users and generating enough activity to attract more clients. One barrier to entry that stops new techniques from gaining traction is the network effects possessed by current social media giants. However, early adopters can benefit financially from DAOs, which help networks get off the ground.

New DAO experiments and models have exploded in popularity in 2021. Meanwhile, the number of initiatives and organizations developing the tooling required for DAOs to realize their full potential is among the most diverse in the sector.

If Web3 is to become a user-owned internet, DAOs will be the organizational primitive through which that ownership is distributed.

Web 3.0 is already eliminating the need for resumes and working towards enhancing recruitment techniques. It won’t be long when DAOs will revolutionize the present social media ecosystem.

After all, a content business is all about establishing and growing an audience. Therefore both social and media DAOs work nicely in the content entrepreneur’s model. They are more likely to interact and become loyal to your brand if you give them a vested stake in the running of the firm. They’re also more likely to become brand advocates or ambassadors, referring your business to their friends, fans, and followers.