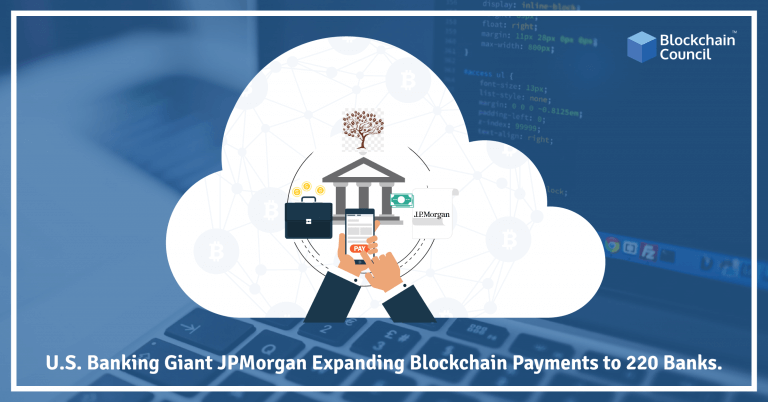 According to a news release on 22 April 2019, mega-bank JPMorgan Chase & Co. plans to expand an existing blockchain project in an attempt to fend off competition from money transfer services such as TransferWise and Ripple. This feature which will be live in Q3 will be used for both domestic and international payments.

Financial holding company JPMorgan Chase & Co., founded in 1968 and headquartered in New York, provides a wide range of investment banking products and services for all capital markets. Its services include capital raising in debt and equity markets, sophisticated risk management, cash securities, and derivative instruments, and prime brokerage and research. It operates across segments such as commercial banking, asset and wealth management, corporate and investment banking, consumer and community banking.

The Interbank Information Network (IIN) which is based on blockchain was set up in 2017 in partnership with the Royal Bank of Canada and Australia’s ANZ Bank. It currently assists more than 220 banking members in dealing with payments which contain errors or those that are held accountable for reasons of compliance. When it was first launched in 2017, the top 75 financial institutions of the world became a part of it. The payment system became more quick and transparent with more banks and financial institutions joining the network.

As revealed by JP Morgan in 2016, the IIN has been built using Quorum, the ethereum-based blockchain network, an offering from JP Morgan’s technology labs. John Hunter, JP Morgan’s Head of Global Clearing, mentioned that JP Morgan has now built a feature that will allow for the real-time verification of a transaction being sent to its valid account. Any errors found in the account number, code, or other account details, can result in the rejection of payment days after it was sent. John Hunter also said that the IIN is fast developing and stated that “the bank is looking at the ability to do more at the point of settlement.”

As commented by John Hunter in a conversation with the Financial Times, “Banks straight-through processing rates are in the mid-80s to mid-90s. It’s that gap- the 5 to 20 percent of payments- that have to be assessed by operations where we’re trying to alleviate some of that pain.”

Though the IIN is now free to use, it may include a subscription method over time. JP Morgan is also working towards developing a sandbox which will be launching in Q3. This will allow fintech startups to make use of the IIN and to develop and launch applications based on its features.

One of the companies which are now offering services similar to the ones that JP Morgan is now developing is Ripple. Ripple uses the XRP Digital Asset to offer blockchain-based financial solutions to the unbanked. It is currently working with more than 200 financial companies in the world.

Experts have predicted that the network’s long-term ownership can be determined depending on its performance as an ecosystem by providing the much-needed timely support that would be supportive of the industry.