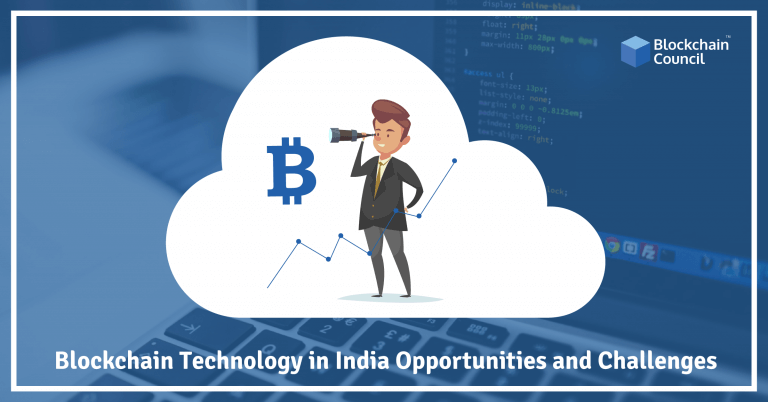 One of the growing trends of 2018 is Blockchain. The technology has changed the world and has opened the gateway of opportunities. It has not only become an integral part of many new applications but at the same time, it has also become an area of research to widen its use as a part of mainstream life.

Blockchain has caught everyone’s attention across the globe and how can India stay away from it. Being one of the fastest growing economies, India is also trying to step into the zone of Blockchain to find its applicability for its benefit.

Before we go ahead and dig deep into its use, let’s have an understanding about Blockchain. It is a digital distributed ledger. Here every transaction is in chronological order. Each record is known as blocks, and every transaction is time-stamped. Blockchain makes it very easy for people to track the history. It also makes Blockchain an unalterable technology thus making it full-proof.

When it comes to its advantages, then Blockchain offers series of benefits over the current technology that we are using, the likes of which include:

In fact,  what Blockchain is today was the internet in the 1990s. Since the internet first came into existence, it faced similar apprehensions and doubts as Blockchain is facing today. But with the passage of time, this technology grew and so is Blockchain going to rise in the times to come.

When it comes to the skill set required mastering this technology, then you need the following:

Knowledge of payment processing, credit services, and financial services
Acquaintance with the concept of Big Data and Data Science
India and Blockchain technology

We all know that China is making efforts to use Blockchain Technology and find its application in mainstream life. Walking on the similar footprints, India is also making an effort to find the use of Blockchain. The country has taken steps towards digitization; Blockchain is the next thing India would be eyeing at.

As mentioned above, the decentralization feature of Blockchain Technology makes it an accessible technology which will find applications in different aspects of our daily lives. From tracing the origin of the product to a financial transaction, Blockchain can be a great platform.

As per reports published in the Business Line: “The Karnataka government has shown an inclination towards the Blockchain Technology .”

Voting is an area where the use of Blockchain Technology can prove to be revolutionary. Although it’s a dream, in the long run, the nation is in a dire need to bring in the system which can ensure transparent and secure voting.

The inclination of the nation towards Blockchain can be deciphered from the fact that RBI or the Reserve Bank of India is planning to come up with a committee that will study the application of Blockchain and in creating a decentralized and cashless banking system.

Telangana government has also announced the use of Blockchain Technology in digitizing land records and upgrading other data.

Challenges in the way of Blockchain :

Although the future of Blockchain looks promising, at the same time, we cannot ignore the fact that there are many unanswered questions which make Blockchain highly vulnerable. Let’s see what the challenges in the way of successful adoption of Blockchain are:

The Blockchain is at an infancy stage. It is too early to predict its applicability as a mainstream technology. There are still many changes that need to implement to make it full-proof.

We cannot ignore the fact that Blockchain is over-hyped which has made people have unrealistic expectations from it.

Lack of regulation and compliance are the most prominent challenge in the way of successful adoption of the Blockchain. There are still millions of people who are alien to the concept of the internet and digitization, and under such circumstances, making Blockchain a part of mainstream life is a daunting task.

Well, if Blockchain becomes a success and is implemented in India, it will be a revolutionary change. It will not only pave the way for new set of job opportunities but will make the nation stand proudly on the global front.

What is JP Morgan doing in Blockchain space?
Scroll to top