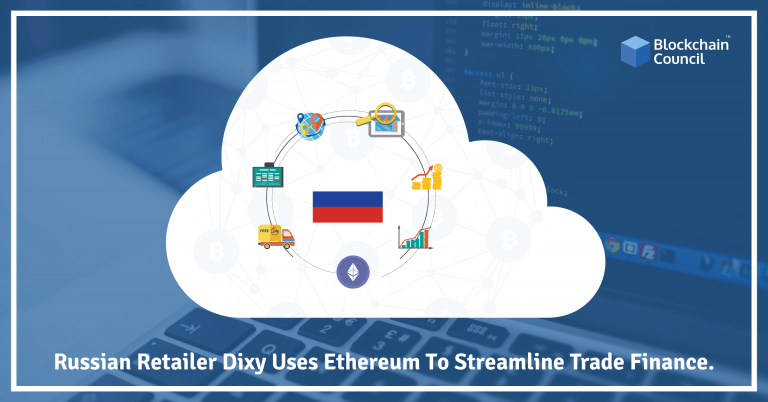 The fourth largest retailer player in the country is a crucial participant in the brand new Ethereum-based blockchain trade finance platform, which has been launched in Russia. After a six-month pilot phase, Factorin, the Russian blockchain startup, has announced the launch of its system into production with DIXY. DIXY is a supermarket chain which made a revenue of almost $5 billion in the year 2018. It is said to hold 2 percent of the Russian market.

DIXY is a leading retailer of Russia which specializes in foods and everyday products. It specializes in developing supermarket stores of neighborhoods in Moscow, St.Petersburg, and three federal districts of Russia such as Northwest and Urals, Central, and the region of Kaliningrad. All these locations put together account for more than half of the market for foods and everyday products in the Russian Federation. DIXY is rapidly growing and is expanding its geographic presence by opening numerous new stores in various Russian regions. DIXY continuously strives to offer low prices, a wide assortment and makes customer loyalty a priority.

The new system is developed on a private version of Ethereum. With this system, DIXY’s suppliers will be able to receive their payments within one working day instead of the previous time frame, which was two weeks. According to Andrei Maklin, the Co-founder of Factorin, this system will connect several banks and factoring companies via a single interface. Factoring refers to facilitating the settlements between retailers and multiple suppliers. Alfa Bank and Pervouralskbank are the two Russian banks which are among the first participants. Participants can access this platform from both desktop and mobile interfaces.

his project had been in the pilot phase since December last year. Maklin further informed that over this period, more than 12000 transactions had been done. Maklin also commented, “Now with the testing, we see that the platform significantly reduces the time of settlement, and we’re going into production.”

As said in a statement by Julia Zhuvaga, DIXY’s chief financial officer, “Tech visionaries like to thrill the public with the stories of the beautiful future, but in reality, top management in any company wants to see better results not in a couple of years but as soon as possible. This platform allows us to see the change here and now.”

As reported by Maklin, there are at present 20 nodes in its network and out of that, two are “full-fledged” nodes on participant’s servers. There are plans to set up three more nodes and that is now in process. The other nodes are working in the cloud.

Maklin also stated that “Working with Dixy for us became an example of innovation in the large companies. We have ambitious plans for retail and other industries.”

Further down the road, this platform will be scaled up and adapted for various types of industries.

Role Of Blockchain In Data Storage
Scroll to top