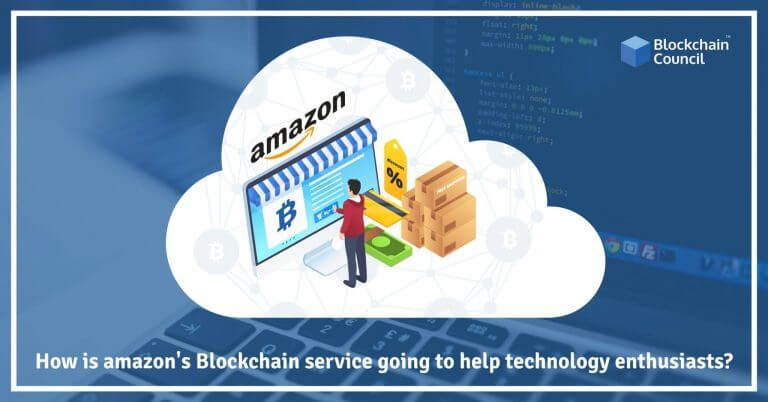 The e-commerce giant warrants no introduction as it consistently ranks among the top 4 tech giants along with Apple, Google, Facebook, and Microsoft. Amazon’s business encompasses a wide variety of services including online shopping, cloud computing, consumer electronics, etc. Amazon Web Services (AWS) is a subsidiary of Amazon that provides cloud computing platforms on-demand to users on a paid subscription basis. AWS allows subscribers to have a reliable virtual cluster of computers, available all the time over the Internet. In fact, AWS is Amazon’s most profitable venture which accounted for all of Amazon’s operating income in 2017. So how can AWS be combined with blockchain technology to provide solutions that were not possible until now?

Amazon Foraying into the Blockchain Space

In its recent re: Invent conference, Amazon announced that it is launching two new blockchain products – the Amazon Managed Blockchain (AMB) and Quantum Ledger Database (QLDB). The Amazon Managed Blockchain is the more significant of the two products as it can help developers use blockchain without worrying about the overheads of setting up a new network from scratch. The AMB scales automatically to meet the demands of thousands of parallel applications running millions of transactions. Once the network is up and running, AMB makes it easy to manage and maintain your blockchain network. The AMB service uses the open source Hyperledger Fabric since IBM recently opened its developer platform to Amazon Web Services.

The Amazon Quantum Ledger Database is a fully managed ledger database with a central trusted authority. According to Amazon, QLDB offers an append-only, immutable journal that tracks the history of all changes so it is not a blockchain in the strict sense. Like AMB, QLDB can also scale automatically, adding more capacity as needed and reducing capacity when sitting idle. Amazon claims that QLDB is a new class of database that eliminates the need to engage in the complex development effort of building one’s own ledger-like applications. Records stored on the QLDB are immutable and QLDB aims to remain accessible to developers by using an API which is quite similar to SQL.

What does Amazon Want from its Blockchain Services?

As noted above, the cloud computing platform is much more profitable compared to the online shopping for Amazon. In 2017, Amazon’s North America e-commerce business delivered fourth-quarter net income of $1.69 billion on revenue of $37.3 billion whereas the international e-commerce sales were $18.04 billion with a net loss of $919 million. By comparison, AWS had a net income of $1.35 billion for the fourth quarter with sales of $5.11 billion. It is clear from the numbers that Amazon’s web-based offerings translate to a much higher profit percentage for the company compared to its e-commerce sales. Therefore, it makes sense for Amazon to focus on its main source of revenue by adding the latest and greatest technologies that it can offer. Blockchains are the perfect tool to add to its arsenal as the demand of blockchain has skyrocketed in the last two years.

With Blockchains, Amazon is focusing on business to business (B2B) solutions to provide its institutional clients with easy access to blockchain technology. With AMB, Amazon has simplified the blockchain creation process so much that any developer can incorporate blockchains in their projects with only a few clicks. The B2B realm has a more developed ecosystem for blockchain because immutability can be very useful for ensuring data integrity. One of the founders of Ethereum, Joseph Lubin praised the move by Amazon to enter business facing blockchain solution as “a heavy duty, full stack way of getting the company into blockchain solutions.” Lubin claims that blockchains can help Amazon in a number of ways including supply chain management and enhanced web services.