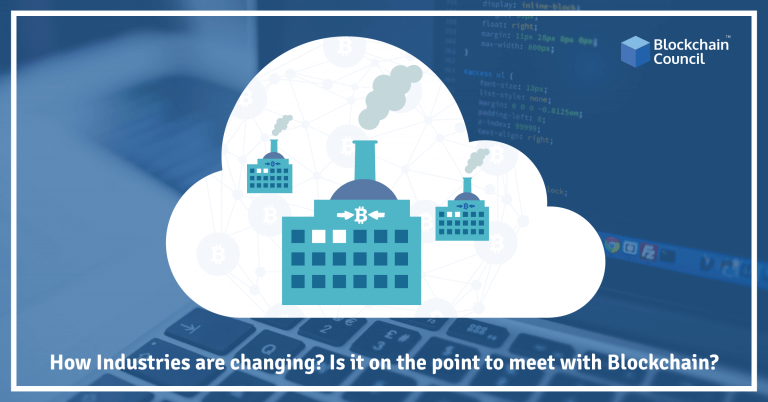 The past one year has seen massive interest in blockchain related projects as the prices of cryptocurrencies have soared sky high. But, with new and emerging technology, it is essential to assess how the theoretical benefits translate to real-world applications. Blockchain Technology offers enormous improvements in our financial and regulatory systems. From automating payments to digitising land records and other official documents, blockchains are undoubtedly going to become a large part of industries in the future. Here’s a look at how industries are changing to embrace this new technology.

Bitcoin has received a disproportionate amount of interest from the media over the last few years because of the astronomical gains that early investors have seen in the cryptocurrency. Bitcoin as a currency has a lot of promise because it’s decentralised, borderless, and resistant to tampering. Experts like Aswath Damodaran, professor of finance at the New York University have claimed that sooner or later cryptocurrencies like Bitcoin and Ethereum are going to compete against national currencies like the Euro and the Dollar. However, this obsession with Bitcoin has led a lot of people to miss out on the real potential of the technology behind Bitcoin – blockchains. Simply put, blockchains are a way to record data in a tamper-resistant ledger that is not controlled by a single entity.

Blockchains have provided for the first time in human history to store information securely without having to rely on a trusted third-party like a bank or a government. This has huge implications in world trade because it is now possible to establish trust between independent entities over the internet. Sectors like finance, real estate, identity verification and supply chain are shaping up to be the biggest gainers of Blockchain Technology because of the security it provides. The second generation of blockchain tech like Ethereum also offers “smart contracts,” i.e., a piece of self-executing code that can be deployed on the blockchain and does not require a centralised host to run. Again, this has far-reaching consequences for a lot of industries like automated bookkeeping and payments and many more. Smart contracts have already enabled a much more meaning crypto economy in the form of secured loans against crypto assets. Smart Contracts automatically enforce laws and therefore hold a lot of value for the legal sector. Combined with decentralised oracles, smart contracts can automate everything from online betting to credit creation.

Changing Attitudes from Businesses and Regulators

As with all new emerging tech, adoption is slow and a lot of fear among businesses to change their existing models. But fortunately, these attitudes seem to be thawing out, as is evident from the recent SEC statement claiming that Bitcoin and Ethereum are not securities. At the same time, interest from businesses and real-world use is at an all-time high with the world’s biggest banks experimenting with XRP, Ripple’s native token. Ripple offers much faster settlements at a much lower cost across border lines compared to existing solutions.

IOTA, one of the most ambitious projects in the crypto sphere is aiming to become the backbone of the Internet of Things (IoT) economy, another emerging tech. To that end, it has landed a number of high-value partnerships with firms like Bosch, Microsoft, Fujitsu, and Volkswagen. IOTA also recently unveiled the XDK110, an embedded system that has a number of sensors that can be used to measure fright conditions and other things. The XDK110 is ideal for anyone wanting to experiment with real networked embedded systems as it is interfaced to a 32-bit ARM M3 MCU which consumers only 30mW (30 thousandths of a watt) when running full speed of 48MHz meaning that it is extremely power efficient.

VeChain, one of the most significant supply chain logistics project in the crypto space is already using blockchain technology to secure shipments across the world. Using blockchain to secure shipments brings the two-fold benefits of ensuring quality along with significantly lesser paperwork. VeChain uses RFID (Radio-Frequency IDentification) chips to track shipments along the entire supply chain to make sure that the shipment has not been tampered. FedEx is the first among freight carriers to be experimenting with blockchain to a very large extent and already using blockchains to secure high-value cargo. FedEx is also helping set industry standards for blockchain based logistics by joining the Blockchain Research Institute, for the development of blockchain tech and study its impacts on business, government, and society.