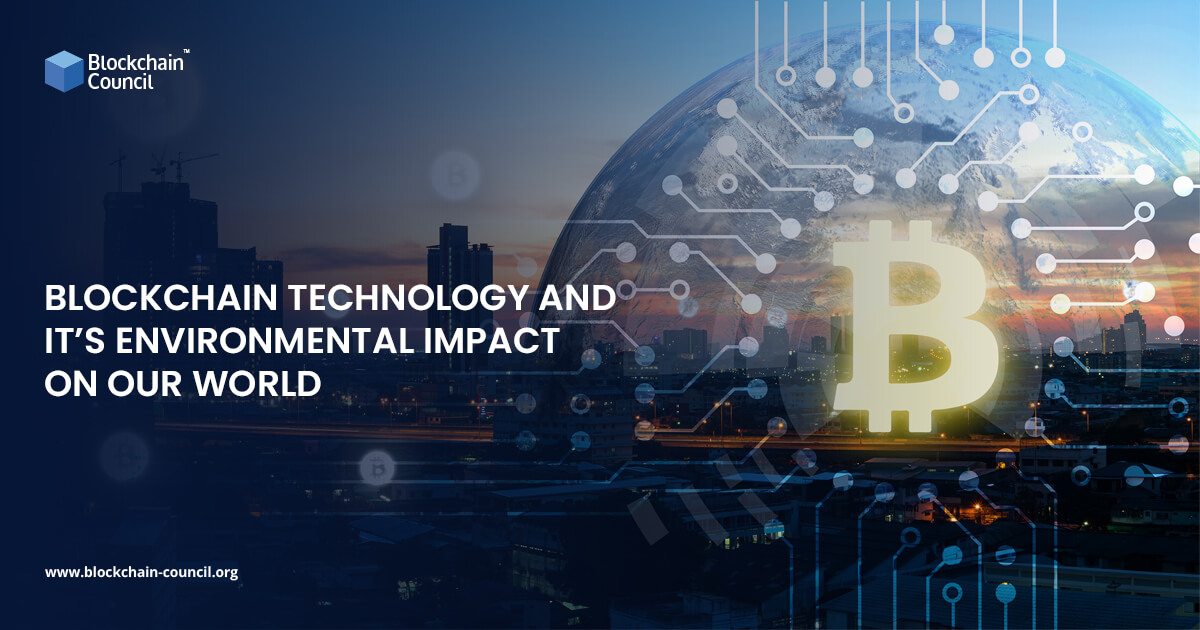 The blockchain is unarguably one of the most innovative technologies of recent times which don’t seem to be anywhere near its full potential just yet.  The possibilities seem endless and the technology is one that can only gain more grounds with further development. In its current state of infancy, many countries (including but not limited to El Salvador, Estonia, and Singapore) and companies (including but not limited to Amazon, J.P. Morgan, and Microsoft) have welcomed the technology with open arms in order to make specific operations more efficient.

As much as blockchain technology is a fascinating technology and is in line to be a key component of web 3.0, a lot of detractors seem to keep their sight on a major flaw, which is the energy-intensive nature of blockchain processes. Even though the Proof of Work (PoW) consensus algorithm (the most energy-intensive process) is just one of the ways of validating transactions on the blockchain, it is still the one used on most of the leading blockchains, including Bitcoin and Ethereum. Studies have shown that Bitcoin mining now consumes more energy than the entire nation of Argentina on a yearly basis, with one Bitcoin transaction using about 2,000 kW of electricity, which is roughly the same amount an average American household will consume in 70 days. To cap it all, scholars have tabled a theory that emissions from Bitcoin mining, which includes about 96 million tons of Carbon dioxide annually could raise the earth’s temperature as much as two degrees. Surely, this model does not seem sustainable, considering our continually worsening climatic situation.

If the PoW consensus algorithm keeps being used, the energy consumption is sure to increase over time as user adoption increases.

It might then seem like an irony, that we still have projects powered by blockchain technology that are aimed at controlling climatic crises. However, for all their good intentions, their supposed solutions in no way address the damage being done by other projects leveraging the technology.

Can mining use less energy?

If we put into consideration the millions of dollars already invested into the framework of the current mining processes, it becomes pretty evident that there’ll be serious challenges when trying to transition to more energy-efficient systems.

There have been a number of suggestions aimed at taming the energy-thirsty, blockchain technology. For instance, there was a meeting between Elon Musk and some CEOs of crypto mining companies, discussing their energy use. The supposed conclusion will be the establishment of a Bitcoin Mining Council which will be tasked with driving energy transparency. There’s also been a Climate accord initiative that is charged with making blockchain run on only renewable energy by the end of 2025 and achieving zero emissions within the blockchain space by 2040. The goal will be achieved in part through the decarbonization of blockchain by reverting to more energy-efficient consensus algorithms while ensuring that projects that require the Proof of Work algorithm to function have their mining farms situated in areas with excess renewable energy.

The popular Ethereum network is also aiming to reduce its energy consumption by about 99.9% in 2022 through transitioning from a Proof of Work to a Proof of Stake consensus algorithm, just like a number of other projects have done. Unlike the Proof of Work, which relies on the sheer speed of computers in solving complex puzzles in order to add blocks to the chain and verify transactions, the Proof of Stake will require miners to show how much of a currency they have locked up (staked), in order to increase their chances of being selected to be the validator. In theory, this will lower the amount of energy needed to validate each transaction. There’s been news that ETH 2.0 will require potential validators to stake 32 ETH (currently worth $103.7m) in order to get a validator opportunity, with multiple of that required for more chances. However, the major concern with the Proof of Stake is that the people with more ETH are in an advantageous position, leading to a system that takes out a key ethos of blockchain technology, which is decentralization.

Also, considering how customizable blockchain technology can be, several consensus models have also been designed. For instance, Proof of Reputation gives more validation rights to the most reputable individuals within the ecosystem. Proof of Authority is another where the network participants stake their identity and reputation, then giving the advantage to those who’d most likely get the job done with zero complications.

It has also been proposed that Bitcoin operations could be moved next to oil fields and mind farms, thereby making use of all their excess energy. However, as highlighted earlier, bringing these theoretical ideas to fruition requires heavy capital injection. And as is well known, the profitability of mining is hinged on the value of the cryptocurrency in question. The challenge then is, “what happens when the price of Bitcoin drops below a certain threshold, calling profitability into question?”. Projects like this will likely get abandoned as they are not financially feasible.

One thing is clear, we need to pay closer attention to the adverse environmental impacts of blockchain technology as it is important not to watch our planet burn out.