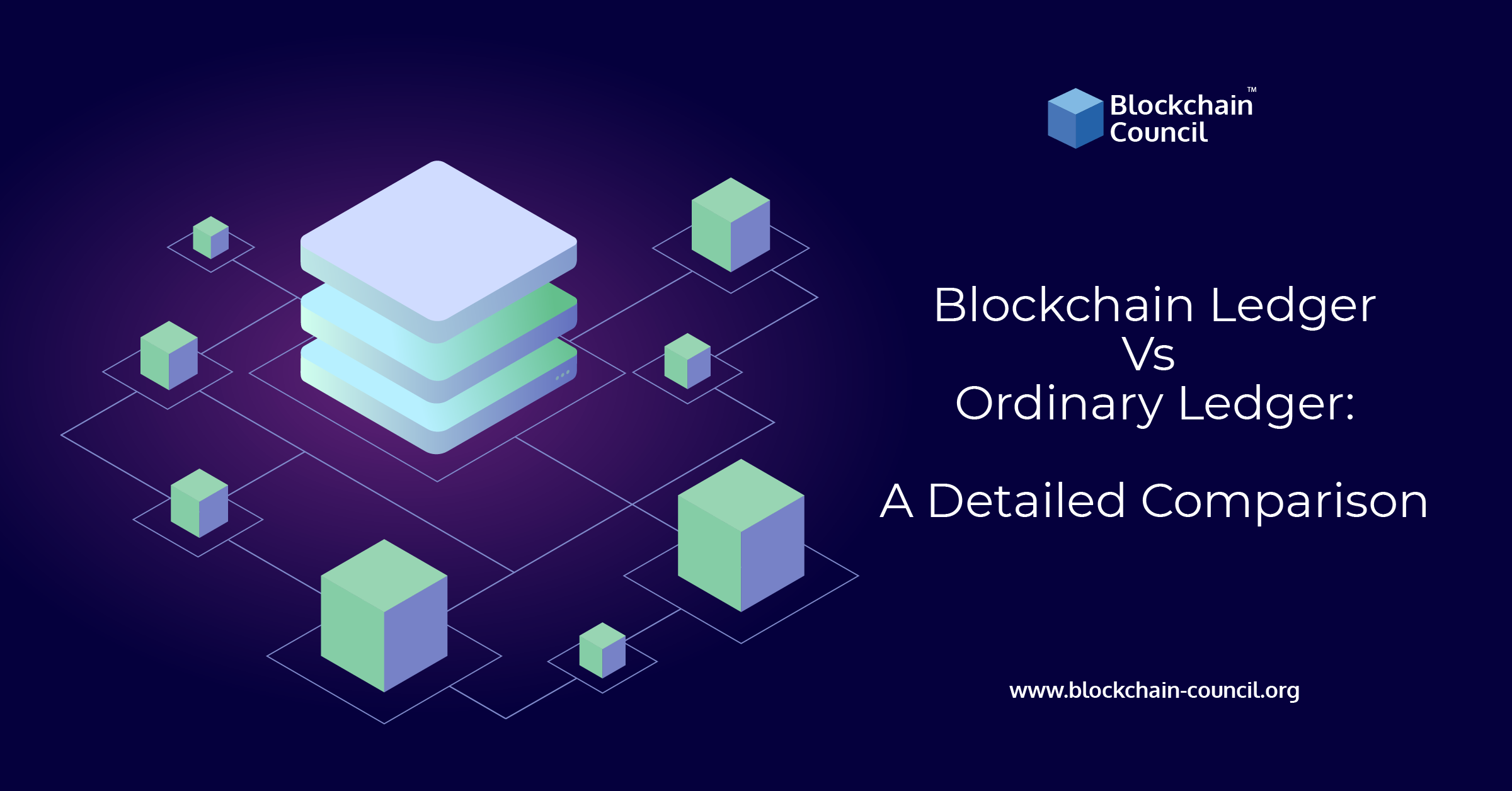 We are residing in a modern digital era of sound bites and buzzwords. Most importantly, all system participants can ascertain that every modification in the ledger’s state complies with all the system’s regulations. In an ordinary ledger, the bank notifies you about your balance. They can tell if it’s a million dollars or a thousand dollars.

But in a blockchain ledger, if they learn that your balance is about to touch million dollars, the bank will only notify that your current balance is less than a million dollars to ascertain a legal state change from the prior balance. In other words, rather than stating balances, they ascertain that funds were transferred.

This article will tell you how a blockchain ledger preserves the integrity of data far better than an ordinary ledger by using blocks.

What is a Blockchain Ledger?

It not only deters the centralized vision but also provides additional transparency, data integrity, and so on. Therefore Blockchain is an incorporation-able digital ledger of transactions programmed to record virtually everything.

In reality, the ledger technique in blockchain technology generates a chain-like structure while compiling data or records. Any data augmented to the ledger will shape this structure, thus explaining the name blockchain

Essentially, a blockchain ledger consists of a chain of blocks wherever every block maintains information or records. These blocks can be called databases, though; databases are, however, utterly incompatible within the sense that they need central management and direction practiced over them.

Each previous block in the Blockchain is coupled to the next block. Thereby creating a linked chain of data scattered in blocks making it tough to change or revise.

However, during this ledger system, security enhancements are implemented in the possible way that every block is cryptographically encrypted using hashing. This way, users with the proper key will “unleash” the info confined within the block.

For instance, Blockchain ledgers are immutable, which means they’re inflexible and can’t be modified by any means or deleted by anyone. Once recorded, the data lives within the block forever in its essential feature!

How Does Blockchain Ledger Work?

Your data is protected in blocks, and each block comprises your data, hash, and hash of the prior block in encoded structure. Hash is a unique ID like your thumb impression, linked in the blockchain system in virtual mode.

If you aim to amend the data in any block, then the hash of that block will enhance, and you will have to make amendments in the next block and follow the same process in all such blocks, and it will take a lot of time to attain this process.

It takes 10 minutes to convert or hash a block, but if the number of blocks is in the millions, it can take more than 100 years.

What are the benefits of Blockchain Ledger?

This article presents why this innovation is more advanced than a standard database and how it can improve our daily lives. The main features of the blockchain ledger act as bookkeeping to record all transactions in the Blockchain Technology System.

Blockchain is distributed, secure, transparent, immutable, and accessible. These are the main features of the Blockchain ledger:

Standard Databases have a centralized pattern that revolves around a major point of power. Once it is destroyed, the whole system ceases to function. On the other hand, blockchain ledger has a distributed structure and no main control point. This protects the system from corrupted nodes. Blockchain Ledger does not store any of its data at the centralized location. Instead, a network of computers replicates and distributes Blockchain. Each computer updates its Blockchain to real-time to show the insertion of a new block.

The blockchain ledger is made out of digital blocks which contain information of every transaction ever made on the system. Once the data has the system that rejects the tampered information and remains secure, this makes the data immutable.

This data can’t be changed, and a new block is created whenever an update takes place. That means they’re inflexible and can’t be modified by any means or deleted by anyone. Once recorded, the data lives within the block forever in its essential feature!

So many people acquire products without understanding their concepts. On the other hand, the Blockchain allows consumers to access the whole history throughout its supply. It is available and allows different parties to share information, ensuring a smooth and fast flow of data.

Once the records get assessed before a node gets added into the ledger, thus it’s simpler to track or trace any data. This is a common usage of the blockchain ledger. That’s why many industries are using it; specifically, Blockchain for the supply chain is widely common.

Now, it’s time to talk about an ordinary ledger, how it works, and the benefits of using a normal ledger. Let’s get started.

What is a Usual or Normal, or Ordinary Ledger?

A ledger is a book that maintains such accounts where debits and credits transactions are posted from the book where the original entries are made. Or rather, the entries from the original book are updated in this ledger.

Layman’s terminology is entirely a document we develop to identify our worth of possession, earnings, liabilities, capital, and expense.

A general ledger is used by companies and organizations that use double-entry bookkeeping. This means that each financial transaction affects at least two sub-account accounts, and each entry contains at least one credit and one debit transaction.

An original ledger records huge financial statements of firms with credits and debits. This enables a corporation to keep track of its costs and earnings, contributing a complete understanding of its monetary profile.

How does Ordinary Ledger work?

An ordinary ledger is no less than the foundation of a company’s system, used by accountants to keep and organize the financial data used to develop the company’s financial statements. Transactions are posted to specific sub-ledger accounts as per the company’s chart of accounts. And then, these transactions are summarized or closed in the general ledger. Thus, the bookkeeper creates a trial balance, which reports the available balance in each ledger. This trial balance is checked for defects and errors and adjusted by submitting additional required entries; Thus, the financial statement is made.

What are the benefits of using an Ordinary Ledger?

An ordinary ledger is used by companies and organizations that use double-entry bookkeeping. This means that each financial transaction affects at least two sub-account accounts, and each entry contains at least one credit and one debit transaction.

We will now discuss the key differences between blockchain ledger and ordinary ledger to comprehend which one is the best. So, let’s dive into our main concern!

A public blockchain ledger can give full transparency to any node. This suggests that any node in the network will read the ledger whenever they want. This promotes trust within the system and omits any scope for information manipulation. However, it is amended to support blockchain technology, as personal Blockchain doesn’t offer full transparency; it only provides partial transparency. On the other hand, only licensed users can access a normal ledger, not giving good clarity.

In a blockchain ledger, there’s no facilitation of centralization. Blockchain is distributed and decentralized, and it no longer wants any relevant authoritative discern to function. All the system is automated, which eliminates any corruption problems.

On the alternative hand, an ordinary ledger is entirely centralized. This method that a government keeps the ledger and may modify it every time they want.

This point is within the blockchain ledger vs the usual ledger comparison report.

Encoding during a blockchain ledger is accomplished by facilitating cryptologic hashing of knowledge in a block. The information is encrypted before adding it to the ledger below the aegis of a unidirectional indeterministic cryptographic hash.

This strategy has unbroken several prowlers and cybercriminals. Trend property users get pleasure from a decentralized and secure dealings facility.

On the other hand, a typical ledger fails to supply this security level, making it easier for hackers to push into the system and misuse it.

This feature, too, is entirely withheld by blockchain ledgers. Immutability refers to the impossibility of modification and alterations. Blockchain ledgers provide this feature wherever once the info is kept during a block, nobody can alter or perhaps delete it!

In contrast, ordinary ledgers can be altered or tampered with and might even be deleted whenever we tend to want. They’re not immutable, and they are significantly at risk of data breaches.

The blockchain ledgers possess data integrity because every data is analyzed before it’s added to the ledger. Blockchain can utilize various consensus algorithms to ascertain the data, and this procedure maintains the integrity of that data.

In the case of ordinary ledgers, humans add the data manually to the ledger; therefore, they may make a lot of mistakes. Users can even alter data; thus, it does not provide data integrity.

In a blockchain ledger system, users are solely allowed to browse and write information. Moreover, once this data is wrapped to a block, it becomes immutable. This only permits them to look at data when the fact, and can’t be altered by any means.

However, in a very standard ledger system, a user has all the liberty to read, write, alter or delete data in any manner and whenever they want! Though a pile of convenience and freedom, this feature is so liable to risks that might even break your bank!

Blockchain Ledger Vs Ordinary Ledger: An Overview of their Comparison 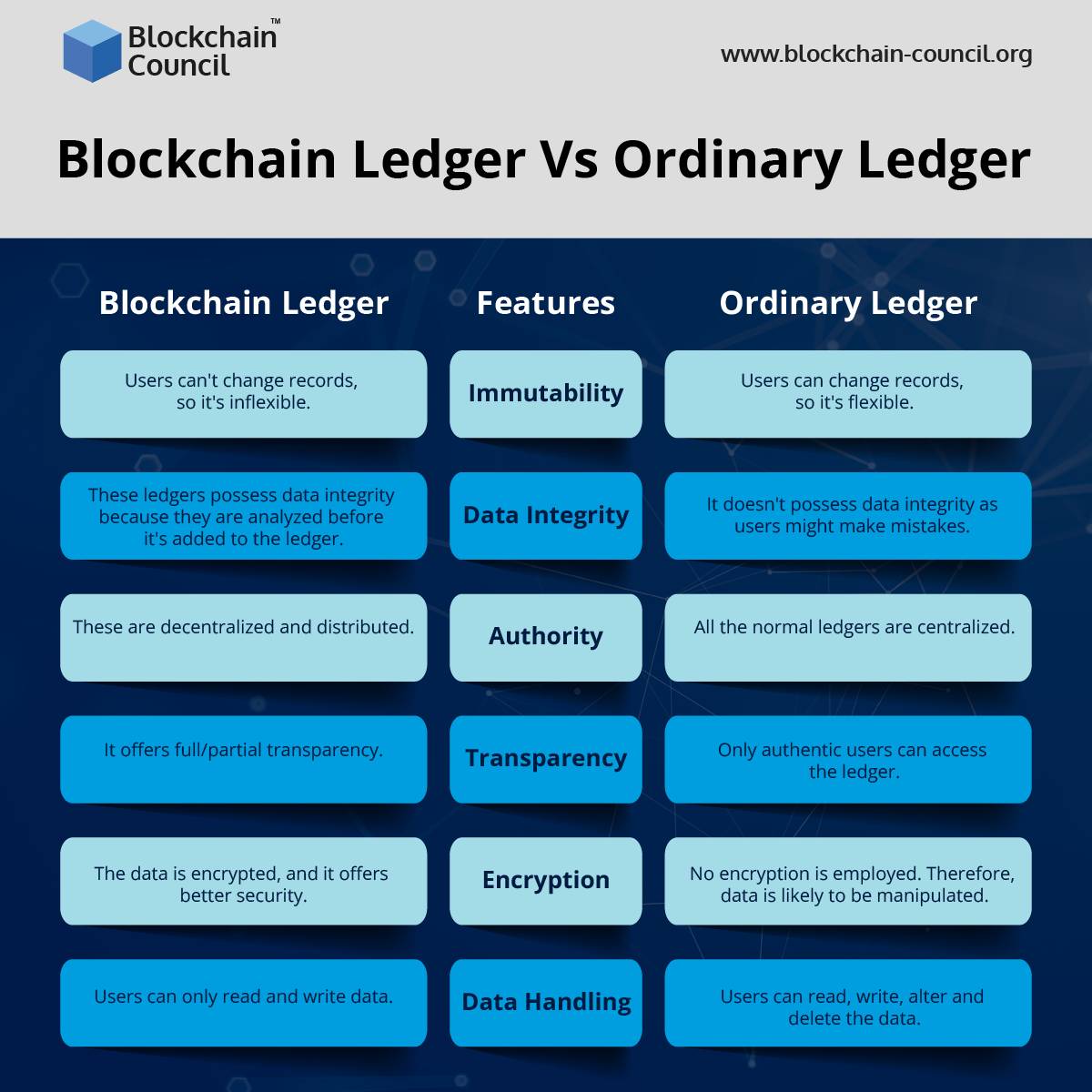 Solidity Vs Move Vs Clarity – A Comprehensive Guide
Scroll to top