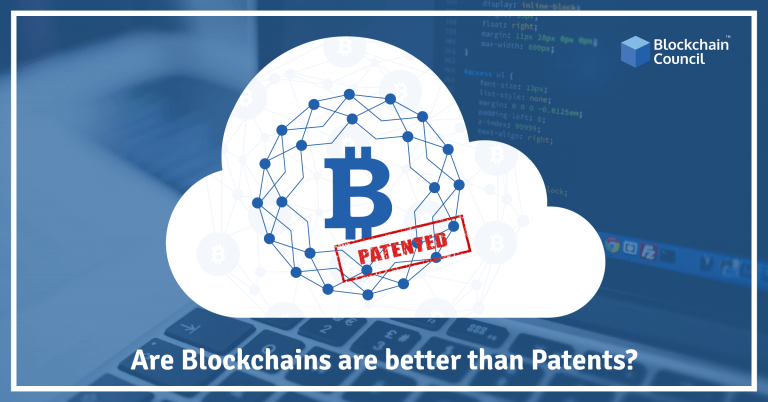 Blockchain Technology has a lot of promise for several industries around the world, from banking and finance to supply chain management and logistics. But perhaps a more interesting use case for Blockchain Technology is, management of intellectual property records and patents receive less attention from the media. Blockchain is open source and completely resistant to tampering and therefore make for a good patent management system. Here’s a look at how Blockchain compares to patents and how governments can save a lot of resources in the human validation of intellectual property by employing smart contracts.

What are Patents and How Much Do They Cost?

A patent is a form of intellectual property that gives its owner an exclusive right by excluding others in making, using or selling a particular product for a specific amount of time, typically 20 years. Filing patents require a lot of checks and balances and are a lengthy process which usually involves paying lawyers several thousand dollars. Not only that, but there are strict rules regarding who can apply for a new patent. For example, when applying for a patent, the invention must show an element of novelty. Filing for a patent requires a detailed specification of the invention that can be used to prevent the replication of design by a person in the relevant field. Additionally, the invention must be capable of industrial application meaning that it shouldn’t just be theoretical.

The process of filing a patent is quite lengthy and typically requires retaining the services of a lawyer to navigate the intricacies of the patent office of a region. The first step in the patent application process is to file a non-provisional patent application, which involves paying attorney fees typically between $5000 and $15,000 but sometimes more depending on the complexity of the invention. The most expensive patents are international patents, which can run up to $100,000 or higher. Domestically the costs can be $10,000 or above. Despite the high amount of money required for filing of patents, there does not seem to be a clear financial advantage to owning patents. For instance, recent analyses show that up to 97% of patents generate less revenue than they cost to obtain. That means that the process of filing patents as it stands right now is far too complicated and expensive for it to be any use of for the average person.

How Can Blockchains Help?

Fortunately, Blockchains can be a solution to several of the issues highlighted in the process above. Blockchains is an open source ledger that is accessible to everyone including the general public and therefore, it makes sense to use Blockchains to award and manage patients. Blockchains can act as a tamper-proof repository of intellectual property for all the world to see. In addition to keeping the invention safe, blockchains could also be used to track ownership of these digital assets using public key cryptography. Similar to other digital assets like CryptoKitties, patents can also be stored and transmitted securely on the Blockchain. In addition to giving complete control of the intellectual property to the inventor, doing so also ensures that patents can be manipulated in any shape or form.

When filing a new patent, a significant amount of resources are spent in making sure that the patent is not a duplicate. A lot of effort could be saved in this exercise if governments were to use Blockchains for awarding and managing patents. Not only that but having a shared ledger of all the patents would also allow the general public to look up patents before infringing upon someone else’s invention accidentally.

How did Malta Became the Blockchain Island?
Scroll to top