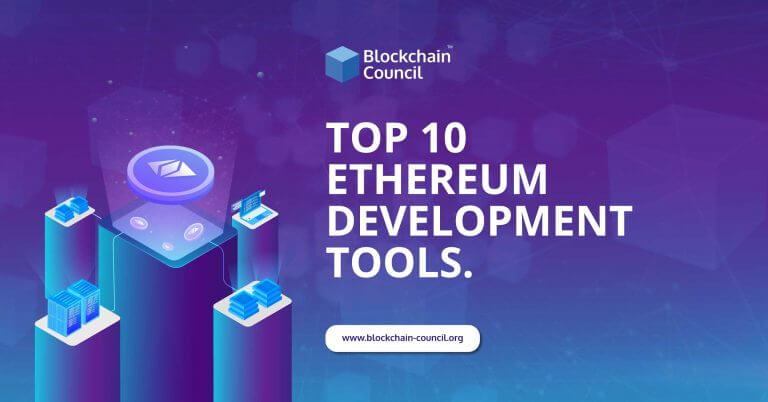 In this article, we will be discussing the best Ethereum development tools. Though the exact toolset you need will differ depending on the specific blockchain you are looking at, most of the development tools are compatible with Ethereum, and hence we analyze the various development tools used on the Ethereum platform. Another reason for choosing Ethereum is because it is one of the oldest and well-established platforms that aid in building decentralized applications (DApps).

Though there are umpteen numbers of development tools available in the market, we will look at some of the most prominent ones.

It is a debugging and compiler tool. It is one of the best blockchain tools for beginners because it allows one to debug the code right then and there when they are doing the coding. It comprises of a compiler that takes the Solidity code for the smart contract and formats it so that it can be read by the Ethereum Virtual Machine (EVM). The interface is set up in such a way that you can key in your code on one side of the screen, and you can view the deployment of the code in the blockchain, on the other side of the screen. It can be used on the browser and can also be installed on the screen.

Truffle is a very popular and widely used blockchain development tool that is also known by other names such as BitGo and Shapeshift. Truffle is an Integrated Development Environment (IDE). An IDE is a framework for developing and deploying DApps. It offers many features for developers such as:

This is another tool from the Truffle suite. This will allow you to create your own private Ethereum blockchain to test your DApp. It is a personal blockchain tool for Ethereum development that will allow you to develop applications, run tests, and deploy contracts. Ganache is available for Max, Windows, and Linux. It is available both as a command-line tool and as a desktop application. Using Ganache will allow one to do as much testing as they want without paying any gas costs. It allows one to manipulate the mining speed and gas costs within the testing environment to play out different scenarios for smart contract transactions.

It is an alternative to web3.js and is a front to back end library. It is the most common library for the decentralized applications of Ethereum. The features it offers are beyond the ones offered by web3.js, and they are:

It was originally developed for use with Ethers.io. But it has now grown and has become more general-purpose in scope.

It is a wallet that functions as a browser extension. Metamask can be used for storing the keys for the Ether and ERC20 tokens. It acts as an effective bridge between browsers like Chrome or Firefox and the Ethereum blockchain. It interacts with several Ethereum test networks. This makes it an ideal wallet of choice for developers. It directly links with Coinbase and Shapeshift for buying and selling ETH and ERC20 tokens.

It communicates with Geth and is a user-friendly browser interface. It is also a wallet. Geth is a program that serves like a node for an Ethereum blockchain. Mist was developed by the team behind Ethereum. It is an integral part of the DApp ecosystem of the Ethereum network that helps run and execute various Ethereum applications and projects. The features, functionalities, and content of the Ethereum network can be accessed and used through two resources such as the Mist browser and the Mist wallet.

It can be defined as the implementation of an Ethereum node in the Go programming language. It is a multi-purpose command-line tool. It also offers the option of downloading just the wallet functionality of Mist. But from the perspective of a developer, that will mean losing out on the significant features of Geth. Though it is possible to use Geth to configure a private blockchain, the default configuration connects to the Ethereum mainnet. Geth can be used to mine Ether (ETH). As most of us would be aware, Ether is the digital token of the Ethereum blockchain. Geth can also be used to explore the blockchain, transfer tokens between addresses, and create and execute smart contracts. Though Geth is a handy tool, it is not very user-friendly, and hence, it is best to use it with Mist. As the entire Ethereum blockchain must be downloaded to use Geth, one would need to use an external hard drive.

It is a product from Consensys that offers developers a suite of tools to connect their apps to decentralized platforms and the Ethereum network. CryptoKitties, Metamask, and uPort use the APis (Application Programming Interface) of Infura to connect their apps to the Ethereum network. The infrastructure it provides helps handle long-term scaling solutions and short-term spikes. It provides easy-to-use developer tools and APIs to provide scalable, secure, and reliable access to Ethereum.

I hope you have now got a fair idea of the popular Ethereum development tools used to create decentralized applications and interact with the Ethereum blockchain.

To learn more about Ethereum certifications and become an Ethereum expert, check out Blockchain Council.

How Governments Can Incorporate Blockchain to Reduce Complacency?
Scroll to top