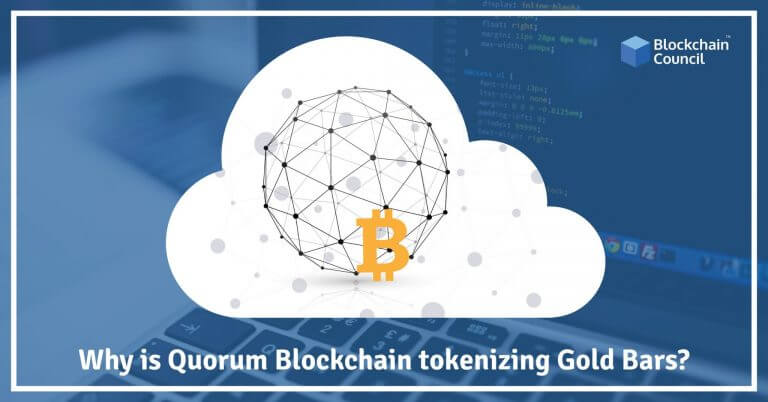 J. P. Morgan’s private blockchain platform Quorum will be used to tokenize gold bars to bring the gold bars straight from the gold mines into the hands of the consumer. Buyers will be able to track their gold bars throughout the mining and refining process to make sure that the gold bar is produced in an friendly way. This will give sustainable miners the opportunity to earn a  premium on the global market while making sure that the end product is entirely unadulterated. This article explores the Quorum blockchain and evaluates various uses cases for the tokenization of gold bars.

What Are the Advantages of Quorum?

Quorum is an enterprise-focused, private blockchain developed by J. P. Morgan as an alternative to Ethereum that offers higher throughput and reliability. Due to the nature of Quorum’s architecture, it is able to provide high-speed transactions at the price of decentralization. Quorum has a limited number of reliable participants that can add and verify transactions, reducing the overheads for establishing truth on a network. By comparison, platforms like Ethereum have to employ complex mathematical calculations in the form of Proof of Work to develop a shared ledger. As a result, while Ethereum and Quorum differ significantly in the amount of decentralized security that they can provide, they can both still be used to provide the same smart contract services such as tokenization of assets. Quorum benefits from the J. P. Morgan name backing it, giving it an air of legitimacy when compared to other blockchain platforms.

J.P. Morgan has established the Interbank Information Network (IIN) which comprises over 75 banks who will use blockchains to enhance payment information. The IIN runs on Quorum and minimizes friction in the global payments process, enabling payments to reach beneficiaries faster and with fewer steps. Earlier this year, in April, Quorum was used to facilitate a $150 million fund transfer between the National Bank of Canada and U. S. Government. The test on Quorum mirrored the Canadian bank’s $150 million offering on the same day of a one-year floating-rate Yankee certificate of deposit.

Tokenizing physical or financial assets has numerous advantages such as the ability to be transferred via distributed ledgers and the complete ownership of the rights to the underlying asset. Tokenization can help bring blockchain technology to the forefront of the global digital economy where everything from cars to houses is tokenized. Quorum makes for a good choice as a tokenization platform because it is unencumbered by the limits of a public blockchain platform such as Ethereum. Reliable banks and corporations manage Quorum’s nodes and run on enterprise grade hardware, making for a much smoother experience for the average user. In a sense, the switch to the Quorum blockchain for the management of virtual tokenized assets would signal a shift from traditional banking services to a more “blockchain-like” management system.

The tokenization of Gold using the Quorum blockchain will consist of wrapping a gold bar into a tamper-proof electric case which can then be tracked from the mine to the endpoint. The main reason for doing so is that the gold trade is rife with human rights violations and buyers in the global market are willing to pay a premium for gold obtained from socially responsible mines. Tokenizing gold also has the additional benefit of being easily transferable against other digital assets. Physically selling or buying gold is a prolonged and tedious process which involves taking the piece of gold to a goldsmith who melts and sends it for analysis before offering a price. Blockchain-based tokens can be easily exchanged for one another via P2P meeting or through decentralized exchanges such as Open Bazar and the 0x protocol for atomic swaps.

Why Tech Giants Are Betting Big on Blockchain?
Scroll to top