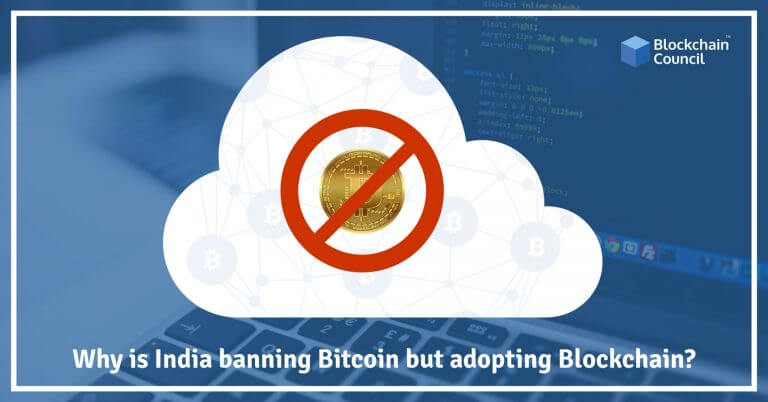 The new bill is here, and we have some great transformations in it. One of it is the ban on the cryptocurrency. As per Arun Jaitley, the Finance Minister, all forms of cryptocurrency have been banned. It’s not only India that has done this, but there are also many nations which are following the suit, and China is one of them. The ambiguity behind cryptocurrency is one of the biggest reasons behind this. Although there is a ban, at the same time, the Government of India is embracing the blockchain technology.

We all know that most of the operations today are digitized, and the government has also emphasized on digital revolution to be the underpinning of the strong future. Since blockchain is the new technology which initially started off with Bitcoin but owing to the multitude of its features it has become a part of many other niches.

Recently, India has made some huge transformations in the economy, one being the demonetization and second was the introduction of the single tax system in the entire nation. The inclination towards blockchain is yet another step towards the economic transformation. The ambiguity that surrounds the blockchain has made the government take a step back from the cryptocurrencies like blockchain. On the other hand, blockchain which shows a promising future has made it think about its use and application on the forefront.

Long Live the Blockchain
Well, when it comes to some of the biggest technological transformations then blockchain is one thing which has garnered the attention of every economy including India. For companies to gain competitive edge its important that they must employ technology which can keep them on par. Blockchain has come up with a solution which will help the companies grow.

The scenario in India
When it comes to our nation, we have government responding differently towards this change. The technology is already making waves in the southern part of India. Andhra Pradesh is one state where we have seen some great changes; the government here is working together with ChromaWay, a Swedish startup, to set up a blockchain-based land registry system. We know that blockchain holds a promising future when it comes real estate in the form of smart contracts, and traceability and this initiative by the Andhra Pradesh government is a step in this direction.

This system will allow the people collateralize property, get loans, and invest in that asset. Another key feature of blockchain which makes it so useful is its traceability feature. With its help, people can easily take the property ownership, circumvent disputes, frauds. It not only helps the buyer but at the same time, it also takes down the administrative hassle and title transfer.

Currently, the real estate around the world works in the following ways :

In all these cases there is a possibility of information getting tampered or hacked, but when we talk about blockchain then, you can see it as a probable solution to all these challenges. Every piece of information is stored in the ledger which is visible everyone in the network. And it doesn’t end here; you cannot change this information, alter or delete it, in case of any changes, it is very easy to trace all the information. Thus, making the system more transparent and authentic.

Apart from this, the Andhra government has also entered into a partnership with WISekey, a cybersecurity firm for securing the citizen’s data and allied information.

It’s not only Andhra Pradesh even Maharashtra government is working on syncing Blockchain with-governance. The government feels that this technology will bring more transparency, efficiency, and accessibility in the system.

Although the government of India has straightaway declined the cryptocurrency, t still feels that blockchain has a long way to go. The banking system in India is relying on blockchain to enable cross-border transactions, processes and international remittances.

We cannot deny the fact that it’s not only the financial sector which can reap benefits from this technology, sectors like healthcare, music, medical, etc. can also see this technology as a transformational tool.

Still learning
India is still at the learning stage, we have seen some major transformations in the economy of the nation. Although, blocking cryptocurrencies may not be seen as a welcoming step by many, but we cannot deny the fact that its underpinning technology, BLOCKCHAIN has paved the way for some huge transformation. Similar to Andhra Pradesh and Maharashtra, many other states are now pondering over the use of blockchain for the betterment of the system.

How Can Blockchains privilege Content Creators?
Scroll to top