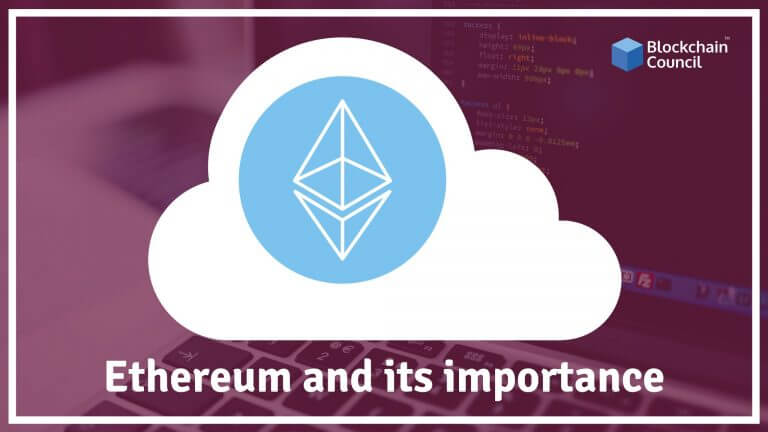 Ethereum is a global computer. It stands for a new model in computing built from the technology and approach basically took the lead in Bitcoin. This digital coin is widely a system for generating a database where the world ledger is shared which tracks Bitcoin balances. Ethereum uses almost the same systems to generate a shared platform for computing which runs in any application. It is a wide network of interconnected computers which does the programming in a decentralized way without requiring any computing function.

What is Ethereum and why it is important? from Blockchain Council

Decentralized apps approved by the global computer, run exactly the way the way they are set up without any permission and intermediary. They are unchangeable and lacks any sort of fraud.

The money in Ethereum’s virtual currency turns into simple code. It opens new opportunities as well as new business models. This technology attracts the interest of the household brands which are positioning for a fourth industrial revolution, It is a blockchain network. Although there are some differences between the two, the most important distinction to note is that Bitcoin and it differ substantially in purpose and capability. While the Bitcoin Blockchain is used to track digital currency (bitcoins), the blockchain focuses on running the code of any decentralized application.

Why is Ethereum important?

Virtual currencies have a lot of selling points- quick, efficient and secure. However, Blockchain is the key selling point.

Blockchain network was first operated by the digital coin- Bitcoin. The transaction that occurs in the Bitcoin blockchain is noted in a “block” separately which follows the other blocks. The block is stable and every transaction is a strong link that secures the overall blockchain and currency increases in a stable way, which makes it a perfect digital ledger.

Where as Ethereum is written in codes. It can help the computer run any algorithms and scripts. It notes details better than the Bitcoin. Therefore it is the best in the Blockchain network for supporting programs. It solves the problem in an accurate way.

Multiple major companies-dozens of Fortune 500s- incorporated Ethereum in their businesses. These companies include Intel, Microsoft, J.P. etc. Other than blockchain’s speed and effectiveness, these companies want this network to enforce smart contracts where in the code dominates the action.

This network is well positioned to be adopted by the masses. This adoption starts with banks that are potentially destroyed by the virtual currency. But it is kindly looked upon by the banks allowing them to prosper in our digital world. The main important factor is that this technology is becoming successful is due to the assurance of long-term profitability.

Ethereum, similar to other digital currency, is volatile. It is best for long-term investment and holds. With more and more companies its value rises.

What are smart contracts in blockchain and how do they work?
Scroll to top