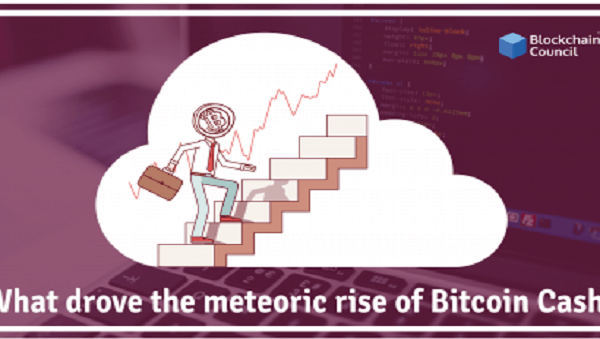 Bitcoin Cash, which has been stewing in the $300 price range ever since August 1, 2017, saw explosive growth last weekend after the announcement that the planned Segwit2x upgrade was called off due to community infighting. Bitcoin Cash’s price nearly tripled in two days, touching an all-time high rate of $2477 since its inception, which translated into a market capitalization of a whopping $40 billion. Let’s take a look at the factors that led to this instant surge.

This “backlog” has been created because Bitcoin core has refused to engage in a debate about bigger blocks touting the purported benefits of keeping Bitcoin decentralized. The community centered around Bitcointalk and r/Bitcoin moderator u/Theymos has shut down any rational discussion of clearing this backlog and imposed an artificial deadlock for personal gain for the company they work for, Blockstream.

Bitcoin Core member is employed by the blockchain company Blockstream and plans to sell off-chain scaling solutions for Bitcoin to companies for a monthly fee and use Bitcoin only as a settlement layer. An average Bitcoin transaction costs over $5 and several hours to clear as of writing this article.

Bitcoin Cash is garnering more and more support from both miners and industry leaders as it gets more profitable to mine and as people look for alternatives to Bitcoin which is controlled exclusively by a small group of Core members. This is because Bitcoin Cash is orders of magnitude faster and cheaper to use than Bitcoin. An average transaction on the Bitcoin Cash network takes around 3 minutes and costs about $0.003.

Despite all these benefits that Bitcoin Cash offers, there are some flaws in its design goals. For example, to use Bitcoin to compete with centralized payment services like PayPal and VISA is very difficult for decentralized systems like Bitcoin.

Mostly, all these payment services are just Databases which track the balances of their users. Therefore, it is much easier for a centralized service like PayPal to update its database for a new transaction compared to Bitcoin where every new transaction gets added to the global ledger and therefore needs to be updated in every node. This means that the 8 MB block size increased is only a temporary solution to the more fundamental problem of scaling.

Future for the one true Bitcoin

Despite the initial impression of disagreement among the different Bitcoin camps lower faith in cryptocurrency as a whole. This process of being able to explore different scaling solutions ultimately benefits both camps as we can measure real-world efficacies of both the chains and ultimately let the market decide as to which is the original Bitcoin. Right now, Bitcoin Cash does offer faster transactions, but it is not clear how Bitcoin Cash aims to scale on-chain to the levels of PayPal and VISA to use Bitcoin Cash for small everyday payments.

Blockchain Use Cases for Retail Industry
Scroll to top