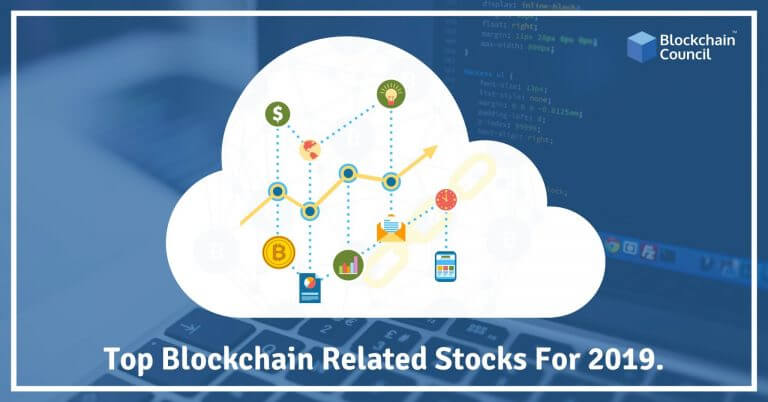 After the overall downward trend that presided over the cryptocurrency markets in 2018, there may be some hope for cryptocurrency investors with the development of Bakkt, and Ethereum’s Casper upgrade. For the more traditional investors in the equity market, there are a number of high profile companies that are experimenting with blockchain in sectors such as finance, healthcare, and logistics. As blockchain technology becomes more mainstream, these companies stand to gain the most from the combination of old and new investors. So here are our top picks for blockchain related stocks in 2019.

IBM or the Big Blue has established itself as a giant in the blockchain space over the last couple of years. IBM’s interest in blockchain began long before the hype and frenzy that overtook the market in 2017. In fact, IBM has close to 1500 people working on blockchain related projects in over 500 projects. In the last five years, IBM’s stock has fallen from its highs of around USD 200 in 2014 to the lows of USD 100 in 2018. IBM’s expertise in fields like machine learning, distributed computing, and the internet of things (IoT) puts the company at the greatest advantage to create highly reliable and scalable tools that can be adopted by businesses. Food Trust is one of the most successful blockchain projects developed by IBM and is being used by Walmart to ensure food security along its entire supply chain.

Mastercard To Use Blockchain To Curb Fraud

Even though Mastercard can be considered a rival to a decentralized payment platform like Bitcoin, it has still invested a lot of resources in the underlying blockchain technology. In fact, Mastercard has one of the highest numbers of blockchain related patents of any company in the world. Earlier in 2018, Mastercard was rumored to be working on a blockchain based payment gateway for fiat money in order to reduce its operating costs. Credit card companies reportedly suffered an estimated USD 25 billion in losses due to fraudulent transactions in 2017. Therefore, reducing fraudulent credit card transactions is one of the biggest motivations for Mastercard to get involved with blockchain. Mastercard’s stock has seen steady growth in the last five years growing from its USD 70 level in 2014 to the current USD 200 levels.

Microsoft Offers Blockchain As A Service

Microsoft has been one of the earliest proponents of blockchain technology leading the charge in accepting Bitcoin payments in the MS Store as early as in 2013. Microsoft offers blockchain to be easily integrated into its Azure Cloud Computing platform. Now, some of the biggest companies in the world like  NASDAQ and AT&T are about to integrate the Azure blockchain into their services. Microsoft stock has also seen steady growth in its stock in the last 5 years almost tripling in the time frame to its present levels of over $100.

Walmart’s stock has seen quite a lot of volatility over the last few years due to uncertain trade policies and too much competition. In order to put all of those fears to rest, Walmart has decided to embrace emerging technologies like Artificial Intelligence and blockchain to improve its supply chain. Walmart became the retail giant it is today by constantly streamlining its supply chain and blockchain combined with smart contracts allow Walmart to take that one step further. For that reason, Walmart has filed numerous patents related to blockchain and has partnered with IBM to develop a platform for ensuring food security at every step of the supply chain. All of these changes would not only improve the quality of the product but also save costs in the long term which is sure to boost Walmart’s stock.