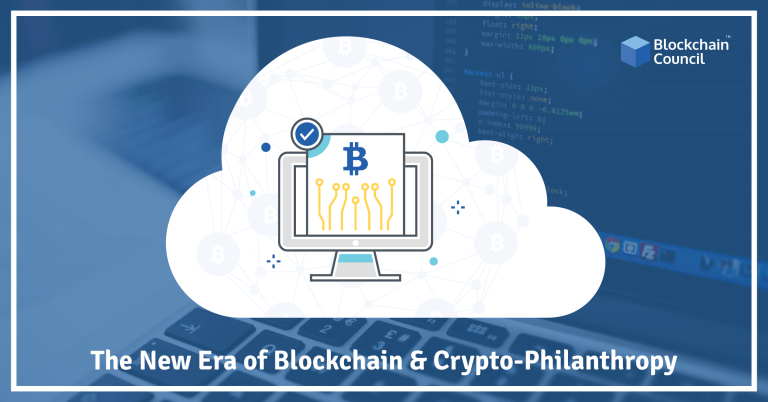 Currently, it seems we are living in the golden era of technology and innovation and what can be a better gift to our generation than the blockchain technology itself! Blockchain technology was popularised by Satoshi Nakamoto when he established the Bitcoin in 2008. From being considered a scam by the world, the technology has come a long way. The blockchain community is growing in size with each day along with rising legitimacy as well.

Blockchain Technology began with revolutionising banking, but slowly and steadily it is spreading its roots in every industry. From the medical industry to IT services, they’re all experimenting with advanced blockchain solution. Philanthropy is one of the latest industries to jump on the bandwagon.

Blockchain solves the two most critical issues associated with the philanthropic industry. The technology brings with it transparency and traceability, thereby ensuring that the ultimate purpose of any philanthropy service is solved; funds and aids reach to the people in need. There is complete transparency towards where funds go, thus ensuring projects achieve milestones before receiving additional funding. Through this groundbreaking technology and, because blockchain is decentralised and not obligated to any government or corporation, funds can be transferred virtually anywhere, instantaneously. The whole transaction is carried out at a fraction of the cost.

One of the large-scale experiments on crypto-philanthropy was executed by none other than the United Nations (UN) in 2017, using Ethereum Blockchain. According to Haoliang Xu, Assistant Secretary General of the United Nations, he believes that blockchain is a technology that can have a significant impact in the developing world in numerous ways. The project was run by United Nations World Food Programme where they transferred $1.4 million in cryptocurrency based food vouchers to 10,500 Syrian refugees in Jordan that could be redeemed in participating markets. The biggest asset in this food program was the massive drop in payments to financial services firms and the middlemen. Other benefits include increased privacy for beneficiaries and quicker reconciliation of accounts since all the data is readily available.

Another concept that has penetrated charitable and Non-Governmental organisations is the Bitcoin funding. A lot of popular institutions like Red Cross, Save the Children, Wikimedia Foundation etc. have been benefiting from Bitcoin donations. All that the institutions have to do is establish an online wallet in which they can receive funding in Bitcoins or any other cryptocurrency. Once received they can easily be exchanged for fiat currencies like the dollar. In fact, some online wallet providers charge zero per cent transaction fee for non-profit organisations. This means that the entire amount is transferred to the donation recipients.

Charity coins are another type of philanthropic venture where some social purpose digital coins have been created to support specific non-profit programs and endeavours. An example of this is Clean Water Coin, which has been designed to raise money for the non-profit Charity: Water to ensure that families all around the world have access to clean water.

Blockchain-based charities can also improve reputations for non-profit organisations as they can increase the trust of the people and the donors can trace their donation. Many times people hesitate in contributing because they don’t want another middleman to fill their coffers with donated money or due to bureaucracy and corruption, the value of these charities is diminished. Blockchain will improve this donor-receiver relationship by establishing direct contact.

Blockchain technology has the potential to transform the social sector in numerous ways driving further innovation and experimentation in the sector. But, just like it is with any nascent invention, we still have a long road ahead to figure out the technical and ethical implications of applying this technology in philanthropy.

Education Revolution and How Blockchain is helping
Scroll to top