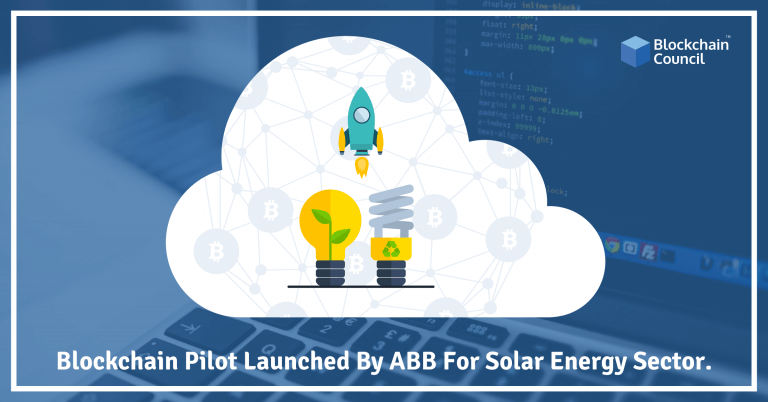 The presence of blockchain technology is apparent in almost every field today as it is widely adopted on a large scale by all industrial sectors. ABB, the international Electrical Engineering company, is currently undergoing a blockchain project, according to news reports. It is looking for ways to implement blockchain technology in promoting the use of solar energy in p2p energy trading and researching the role of blockchain in the smart grids market. Apparently, the international firm has collaborated with Evolvere, the Italian energy entity, for deploying a blockchain system to assist them in this venture.

ABB is a holding company which was incorporated on 5 March 1999. It operates in segments such as Robotics and Motion, Industrial Automation, power grids, and electrification products. It serves customers in utility, transport, industry, and infrastructure globally. The corporate sector includes central research and development and the company’s real estate activities.

This blockchain system is developed in partnership with Prosume, a blockchain-based platform. It is equipped with its own self-regulated and decentralized monitoring system. It guarantees an independent, autonomous, and digitized smart place which will permit users to promote and accelerate new energy community models and exchange different energy sources.

Head of ABB’s Smart Power Business line commented, Giampiero Frisio, stated that “the Evolvere project has allowed us to develop viable and proven solutions for the market in anticipation of new dynamics and regulatory frameworks coming in to place for blockchain technology.”

This collaboration between ABB and Evolvere aims to showcase the role of blockchain technology in decentralizing the way in which transactions are being processed. It helps facilitate automatic payment and faster transactions for various services.

Evolvere and ABB are looking at blockchain-ready inverters with built-in digital capabilities which will enable the participants of the energy market to cut down on capital and operational expenditure costs. A pilot test will be run to check the capabilities and capacity of the inverter. Following the pilot project, ABB will conduct further research on exploring ways to ensure how all of its inverters in the same class will be compatible with blockchain technology.

The press release revealed that “The Evolver project has allowed us to develop viable and proven solutions for the market in anticipation of new dynamics and regulatory frameworks coming in to place for blockchain technology. We are excited to be on this journey as we write the future of energy.”

Right from the beginning of the year 2018, ABB Group is involved in numerous projects on renewable energy. ABB currently operates in six continents and is a world leader in its domain.

Impact Of Blockchain On Search Marketing
Scroll to top