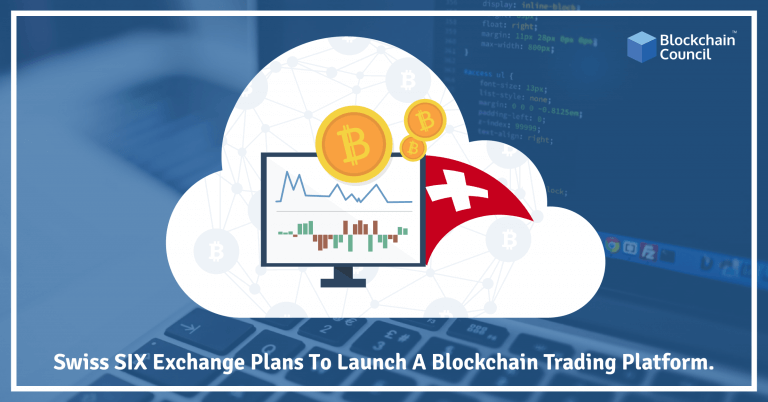 Time and again the world talks about Blockchain and how its implementation can transform the industry. In ten years if its development and growth, Blockchain has witnessed the huge transformation, from its application to its use cases, companies are trying to implement this technology. One of the prime, why Blockchain has piqued every industry, is its multifaceted application. The technology is no more limited to the conventional application; instead, we have seen it find use in some unconventional areas like tracking of funds, charity, voting, academic and much more to the list. Well, a number of features contribute to this. Apart from all these areas of use, Blockchain also finds application in trading by rendering its platform, and SIX Exchange (Switzerland) has announced the launching of a Blockchain based trading platform.

Yes, the news is right, we have been hearing about companies trying to use Blockchain for different business operations. At the same time Swiss trade exchange platform, SIX has announced using the Blockchain for trading. With this DLT, the company aims to create a transparent system of trading. Read ahead to know more on this.

Why SIX decided to sync Blockchain with its trading platform?

The Blockchain is a distributed ledger technology allowing the exchange of information without third-party interference. Time-stamping is yet another key feature of Blockchain that makes every information exchange stored in chronology. This makes it easy for anyone to track and trace the information.

Blockchain offers a number of features that make this technology, and because of this, it finds application in all the business domain. Some of the key features of Blockchain include:

With the help of all these features, SIX will render a safe and transparent platform for trading.

What benefit is SIX Blockchain-based trading platform going to offer?

When it comes to Blockchain based trading platform then one of the prime reason why companies are looking forward to it, is that it saves time and ensures transparency and trust on the system.

With the help of SIX, the company wishes to reduce the trading time which otherwise took several days for completion, but with Blockchain, it will take only a few seconds to trade.

SIX is in with a discussion with FINMA which is a regulatory body. This new Blockchain base trading platform is going to establish an entirely new way of trading. The company plans to raise fund via STO or Security Token Offering. STO has recently picked up the pace and is preferred over ICO or Initial Coin Offering. While STO gives the investors a stake in the company, ICO offers only vouchers for future services and products.

The platform will be launched in the latter half of the year. SDX will offer to trade on selected stocks before they are integrated into the system. The company also wishes to advantage cars and paintings into the system.

This step by Swiss exchange company SIX shows how important Blockchain is for the future. The growth of any organization depends on how advanced system it is offering to its stakeholders and customers, with Blockchain integration, the company aims to create a trustworthy and transparent platform for data exchange.