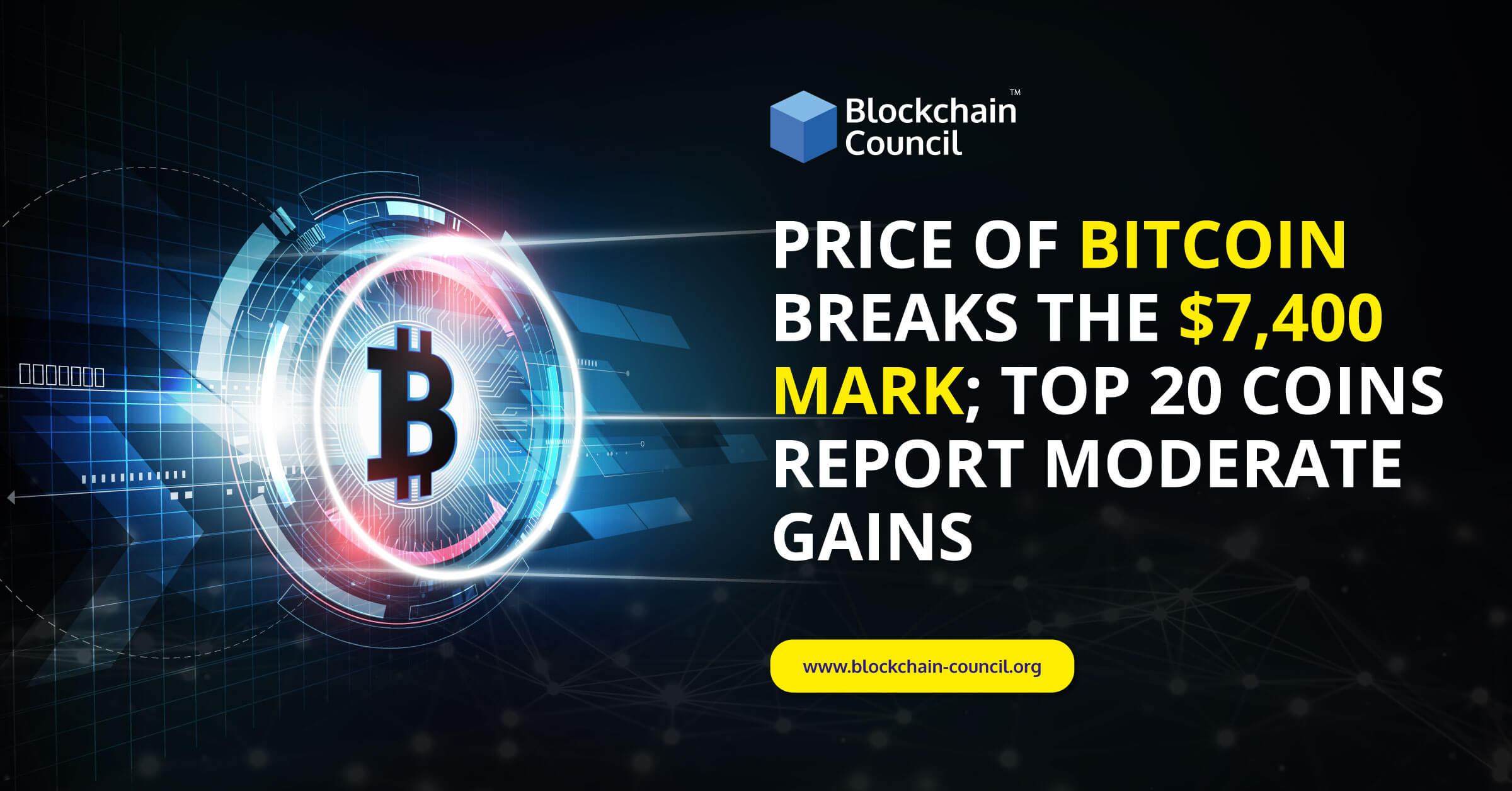 As per news reports on 22 December, a majority of the top 20 cryptocurrencies are currently reporting moderate gains during the time of the press meet. Bitcoin (BTC) breaches the $7,400 mark again. Bitcoin, as we know, is a consensus network that offers a new payment system and a completely digital currency. It is a peer-to-peer payment network that is powered by its users.

Among the top-20 cryptocurrencies, the only one that is seeing losses is the Tezos (XTZ) cryptocurrency. Currently, Bitcoin is trading at $7,422 and is currently up by 3.36% on the day. Weekly charts suggest that Bitcoin is up by 4.1%. Tezos is a decentralized computing platform and a cryptocurrency. It is regarded as the tenth-largest cryptocurrency in terms of market capitalization. The main features of Tezos that make it stand out are formal verification, proof of stake consensus, and the ability to allow stakeholders to vote on changes to the protocol.

As reported by Coin Telegraph earlier today, there are multiple analysts who are currently suggesting that Bitcoin is headed towards a big dip before the next bull market. As per the data revealed by Coin360.com, the crypto exchange live data aggregator, the value of the Ether cryptocurrency has increased by 3.48% in the last 24 hours. At the time of the press, Ether was trading at $132. This week, Ether has also lost 7.04% of its value.

Ether (ETH) continues to hold onto its position as the largest altcoin in terms of market capitalization, and it currently stands at $14.4 billion. Ether is a digital asset bearer similar to a security or bond and is the solution to the issue of payment. Ether functions like cash in the sense that it does not require a third party for approving or processing the transactions. But Ether is not exactly a digital currency. It can be considered as a fuel for the apps on the decentralized Ethereum network.

Ripple’s XRP, the second-largest altcoin in the market, boasts of a market cap of $8.5 billion at press time. In the last 24 hours, Ripple’s XRP has gone up by 2.37%. It is currently trading at approximately 0.195%. As per the week’s reports, the coin is down by 10.55%. Ripple is regarded as the fastest and most scalable digital asset that allows for real-time global payments anywhere across the world. Among the top 20 cryptocurrencies, the one that is reporting double-digit gains is Tron (TRX). Tron is a blockchain-based, decentralized platform that helps in easy and cost-effective sharing of digital content. At press time, it was up by 10.79%.

Litecoin also sees a performance that is better than average, as it has registered 5.45% of gains in the last 24 hours. Tezos is the only cryptocurrency that is seeing losses. It has seen its value decrease by 1.67%. Litecoin is a global payment network that is fully decentralized and empowers individuals to control their finances.

The total market capitalization of all cryptocurrencies at press time is $195.6 billion. This is 0.62% more than the value that was reported a week ago.

To get instant updates about cryptocurrency and blockchain, check out Blockchain Council.