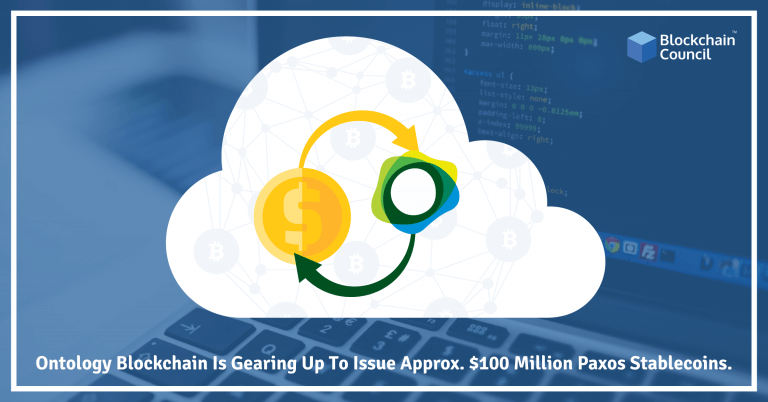 According to news reports in April 2019, $100 million worth of stablecoins have been issued by Paxos to Ontology. Ontology declared that individuals and businesses will gain access to its fiat-pegged tokens using Ontology’s ONT token. The new version of PAX will follow the OEP-4 token standard of the Ontology blockchain. This token will also carry the same ticker symbol. According to Ontology’s co-founder Andy Ji, through the partnership, Ontology is authorized to issue PAX on its blockchain. Even now, PAXOS will still be the entity to carry out the Know-Your-Customer (KYC) processes and the deposit and withdrawal of the U.S. dollar.

Ontology is a high-performance public blockchain project which customizes different blockchains for different applications. It is a distributed trust collaboration platform. It comprises of a series of distributed ledgers and smart contract systems. It provides the tools necessary for the development of decentralized applications and supports multiple programming languages. The ecosystem and blockchain infrastructure has the power to change the landscape and working of numerous industries.

The bitfinex exchange, which shares management and ownership with stablecoin issuer Tether, has been charged with the allegation by the New York Attorney General that it lost $850 million of corporate and client funds and then used Tether reserves for covering up the shortfall. Ontology emphasized that PAX would carry out open auditing and that all its deposits are kept in independent accounts at the Federal Deposit Insurance Corp. in the U.S. Ontology Foundation is based out of Singapore and it launched its public blockchain in 2019 with the aim of providing a high volume of affordable and swift transactions.

Paxos is a regulated financial institution which builds infrastructure to help in the movement of physical and digital assets. It helps buy, sell, trade, and manage assets on a blockchain. Paxos Standard (PAX) is one that combines the stability of the US dollar with the efficiency of blockchain technology. It helps in instant movement between dollars and crypto.

PAX can be used to pay for goods and services. Its peer-to-peer feature allows in sending and receiving U.S. dollars around the world. PAX is used to remove cross-border transaction fees. Paxos Standard was created by Paxos to help in fast movement of money. It is a digital dollar and hence, like any other crypto asset, it can move instantaneously around the globe and is programmable. Paxos is stable, unlike many crypto assets. So, it is possible for the funds to be regulated, audited, protected. It has been developed with the aim of creating a frictionless, global economy. Paxos Standard (PAX) was launched in September 2018. It is available on the Ethereum blockchain as an ERC-20 token.

“The launch of PAX on the Ontology blockchain will greatly accelerate real business applications on Ontology, create more success stories of traditional businesses shifting to distributed businesses, and provide enterprise partners and institutional investors with a regulated, reliable, and safe gateway to the world of digital assets.”