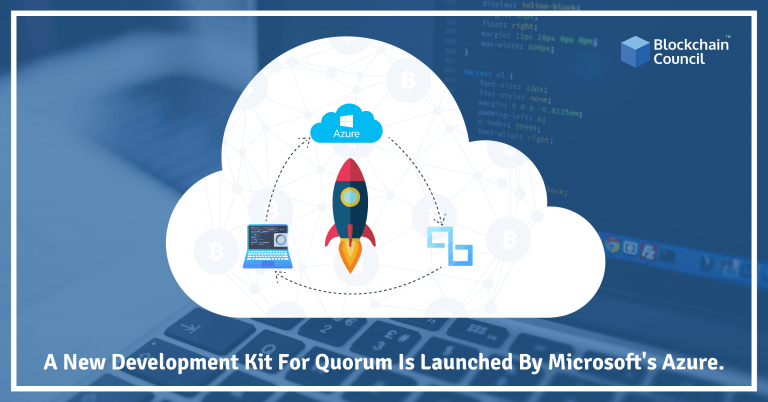 In a blog post released by Microsoft on 6 May, the company has announced the release of a new Azure blockchain development kit for Ethereum. This is done to simplify the development of blockchain technology and for making its development accessible. Azure is Microsoft’s cloud-computing platform. It is flexible, open, and enterprise-grade which helps build, test, deploy, and manage applications and services. Enterprises also use Azure for disaster recovery and data backup.

The Ethereum Development Kit is an extension to Visual Studio Code, the source code editor of Microsoft. Though we already have community published tools such as Solidity and other blockchain tools for Visual Studio Code, the Ethereum Development Kit is the first official set of tools which have been officially released by Microsoft. This extension is designed to support developers who build and design apps with Microsoft’s Blockchain-as-a-Service (BaaS) platform.

The founder of Build Azure mentioned that the Ethereum Development Kit is still in preview mode and it aims to help developers develop apps on the public Ethereum network and also supports the use of tools such as Truffle and Solidity. He also mentioned that both the Mac and Windows OS would support this extension. The Founder of Build Azure, Chris Pietschmann, also stated that:

“This proves even further the investment and dedication that Microsoft is putting forth towards the use of Blockchain ledger technologies in the Enterprise, or even on the public blockchain networks.”

Solidity is an object-oriented, high-level language and is used for programming smart contracts. It aids in the implementation of smart contracts on various blockchain platforms. It is always best to use the latest released version of Solidity as new features, changes, and bug fixes are introduced regularly. It is used to create contracts for voting, blind auctions, multi-signature wallets, and crowdfunding.

Truffle aims to simplify the life of an Ethereum developer. It is a testing framework, a development environment, and an asset pipeline for Ethereum. It offers network management for deployment in public and private networks, the instant rebuilding of assets during development, and built-in compilation of compiling, linking, and deploying smart contracts.

Currently, Azure Blockchain Service supports Quorum. It allegedly streamlines the use of consortium blockchain networks for both creation and modifications.

Visual Studio is a program which helps to write and compile the code when developing apps, software, and even websites.

In recent years, Microsoft has been slowly and steadily building its blockchain offering. Last year, it launched its cloud-based developer kit for the Azure blockchain. In May 2018, Microsoft Azure released Azure Blockchain Workbench, a blockchain app creation service. It provides a readily available infrastructure to streamline blockchain app development. Last month, Microsoft, in partnership with the Enterprise Ethereum Alliance, launched a token-building kit to help businesses design and create cryptocurrency tokens which suit specific needs. Last week, Microsoft expressed that it would promote J.P.Morgan’s Quorum blockchain to its customers on the Azure platform.