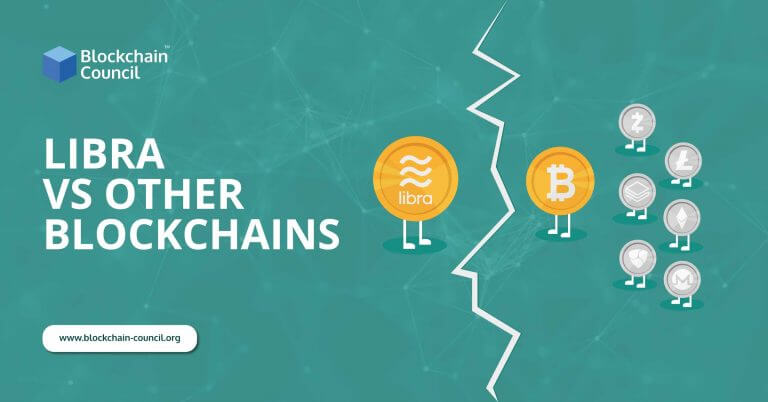 Blockchain is one of the most important inventions in computing as it is a truly native medium which enables peer-to-peer value exchange. It is a vast digital platform based on the distributed ledger technology (DLT) which allows two parties to transact or do business without an intermediary.

Blockchain technology is believed to be the second generation of the internet, which has immense potential to rewire the economic grid and get things back in order. In this article, we will discuss the most recent Libra blockchain introduced by Facebook, and some of the other renowned blockchain platforms.

Let us first understand the basics of these blockchains

Libra operates on the mission of being a financial infrastructure and global currency, which empowers billions of people. It comprises of three parts which make it a more inclusive financial system and they are:

Libra is built on a native blockchain which uses a single data structure and records all transactions and states over time. The Libra blockchain is open source, which means that anyone can build on it and it can cater to the financial needs of billions of people. The unit of currency of this blockchain is called Libra. Unlike a majority of the other cryptocurrencies, Libra is backed by a reserve of real assets. For every Libra which is created, the Libra reserve will hold a basket of bank deposits and short-term government securities in the Libra Reserve.

Hyperledger Fabric is an open source blockchain platform that helps build blockchain-based applications on a modular architecture which enables versatility, optimization, and innovation across a broad range of industries such as healthcare, supply chain, banking, finance, etc.

Openchain is an open source, secure, distributed ledger platform developed by Coinprism. It is suitable for organizations wanting to preserve and manage their digital assets. The rules of the ledger are defined by the administrator. Here, all transactions are digitally signed.

Quorum is preferred for businesses and financial markets. It operates on the principles of privacy and decentralization. It is an open source blockchain platform based on Ethereum handling high-level private transactions. It combines the innovations of the public Ethereum community with the enhancements for supporting enterprise needs. It uses smart contracts for facilitating transactions with the blockchain.

Launched in 2015, Corda  is an open source distributed ledger which helps businesses transact directly using smart contracts. It is one of the best blockchain platforms for the financial industry. It is now being applied in different industries such as healthcare, supply chain, and governmental agencies.

Let us differentiate these platforms based on four factors, namely type of network, supported languages, consensus type, and pricing.

At least initially, Libra will operate as a permissioned blockchain. There will be a selected group of validators or founding members. These must be trusted members and they alone will have the authority to confirm new transactions. It plans to transition to a permissionless system. In both the permissioned and permissionless states, Libra will be open to consumers, developers, and businesses. They can use it to build products and add value through their services.

Ethereum is a permissionless blockchain, which means that anyone who meets the technical requirements can run a validator node.

Hyperledger Fabric is a permissioned blockchain which uses an open-source payment structure. It offers decentralized storage and hosting of applications with smart contract capability. Its permissioned nature allows particular participants of a network to take part in the blockchain.

Openchain follows a private network. This means that it is an invitation-only network which is governed by a single entity. People who enter the network must obtain permission to read, write, or audit the blockchain. Private blockchains allow organizations to employ distributed ledger technology without making the data public. It maintains the confidentiality of the data. Private blockchains are the most cost-effective, efficient, and faster than public blockchains, which need a lot of time and energy to validate transactions.

Corda is a permissioned blockchain where access to data is provided only to authorized parties and not to the entire network. This is similar to the Hyperledger Fabric and Quorum blockchains.

Quorum supports the Python programming language. Python is easy to learn and has a large community which has released a wide range of libraries such as SciPy, Pandas, and NumPy. Python is useful for dealing with large datasets as it helps clean, process, analyze, and visualize them. It is a general-purpose programming language which can be used for building blockchains and smart contracts. R3 Corda supports C++ and Javascript languages. It can support higher-level tasks. It allows programmers to get close to the hardware. It makes a blockchain infrastructure efficient and speedy and optimizes the number of transactions per second. Java is a versatile and popular language. It is a logical fit for the Corda blockchain in terms of maintenance, speed, and extensibility. The Java Virtual machine provides flexibility and code portability and is well-supported across various platforms such as desktops, mobiles, and embedded applications.

Libra uses the Byzantine Fault Tolerance consensus protocol, which helps expedite transactions due to faster validation times and lower verification thresholds. This facilitates agreement among validator nodes. It builds trust in the network as the BFT method is designed to function correctly even when certain validator nodes are compromised. Ethereum differs from Libra in the sense that it uses the proof-of-work consensus algorithm. Blocks are central to an Ethereum system. Each miner takes a number of transactions, forms a block, and tries to add the block to the blockchain by guessing a number to solve a mathematical equation. Guessing consumes a lot of computing power and this is referred to as Proof-of-Work. The proof-of-work algorithm is used to deter Denial-of-Service attacks and other system abuses or breaches.

Hyperledger Fabric uses a pluggable consensus which customizes the platform effectively for different use cases and trust models. This pluggable ordering service helps establish consensus on the order of transactions and broadcasts blocks to peers. Openchain works on the partitioned consensus. This means that every Openchain instance has only one authority which validates the transactions. Each organization controls its openchain instance instead of a single central ledger. Depending on the assets being exchanges, different transactions will be validated by different authorities. Each asset issuer has full control on the transactions concerning that asset.

Quorum uses the majority voting consensus algorithm. This time-based majority voting algorithm uses smart contracts to govern consensus. It uses ethereum transactions for propagating votes through the network. Nodes within the quorum network are given the voter role which allows them to vote to decide which block must be the canonical head at a particular height. The block with the highest votes is considered the canonical head of the chain. A block is considered valid only after a particular threshold of votes has been received. Corda makes use of pluggable consensus method. This refers to pluggable notaries who are services providing timestamping and transaction ordering. Notaries comprise of multiple mutually distrusting parties using a standard consensus algorithm. A notary validates transactions.

As far as pricing policies are concerned, Libra and Ethereum are a vast contrast when compared to other blockchain platforms such as Hyperledger Fabric, Openchain, Quorum, and Corda. Users might be expected to pay a fixed fee to Facebook or the Libra Association for using the storage and bandwidth. The fee will cover Libra’s operational expenses and the payment of dividends to holders. Ether, Ethereum’s cryptocurrency, is charged for transactional and computational services on the Ethereum blockchain.

The other platforms mentioned above operate on a free pricing policy. All transactions are free of costs as there are no miners to subsidize. This means that since there is no miner, the asset administrator directly validates the transactions and they are instantly confirmed.

Blockchain technology is certainly here to stay as it is greatly disrupting and transforming traditional business models. Many business leaders are achieving significant business benefits. Blockchain is one technology which has transformed the business scenario for the better.