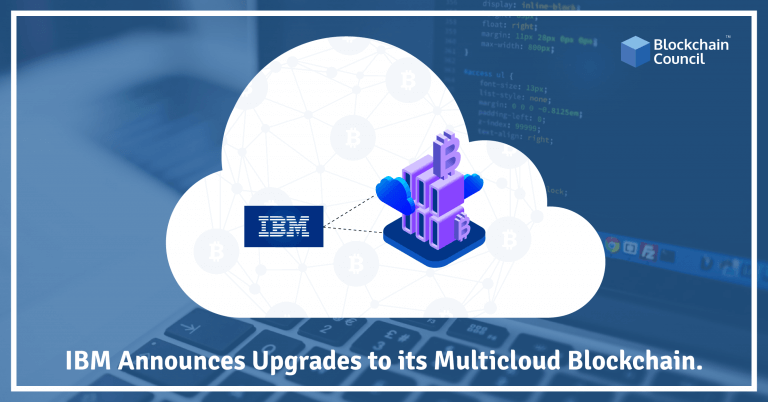 According to news reports on 18 June, IBM announced upgrades to Multicloud, its blockchain platform. The multicloud platform has now undergone a detailed upgrade where it allows clients to leverage to public clouds such as IBM Cloud, Azure, or AWS and company-hosted private clouds such as LinuxOne, Cisco, Microsoft, VMware, etc. This is the main upgrade over the previous version of multicloud, which was available only on IBM’s cloud. The multicloud platform is made available via Kubernetes. It is a computer program which allows users to scale blockchain networks as per their need.

At the press conference, IBM’s CTO, Jerry Cuomo, commented on the vision of the service mentioning that it is a “fully-flexible blockchain platform, built around a well-managed open source distributed ledger technology, that can truly run in virtually any computing infrastructure.”

IBM is a US-based IT Consulting, Computer, and Technology Corporation which is headquartered in New York. It is the world’s largest technology company and the second most valuable in terms of the global brand. IBM deals with the manufacture and sales of computer software and hardware. It operates in segments such as Global Business Services (GBS), cognitive solutions, services and cloud platforms, and systems and global financing. It competes with Cisco Systems, Oracle Corporation, Microsoft Corporation, Accenture, Dell Technologies, etc.

One of the main advantages of the new multicloud platform which IBM boasts about is the interoperability. As reported on the website, the new platform allows blockchain participants to provide governance across multiple cloud networks. This includes those with differing privacy environments also. The multicloud blockchain is a variation on Hyperledger Fabric, the open source blockchain platform. It is almost the same, but the significant difference is the ease-of-access tools provided by IBM. These tools aid in streamlining the launching process of a permissioned network. It also helps assist tasks such as creating consensus mechanisms and assigning governance.

Cuomo further explained that “Developers can now easily move from development to test to production from a single console. Included within the extension are code samples and tutorials, enabling any developer to become a blockchain developer easily. The IBM Blockchain Platform meets developers where they are, offering support for smart contracts to be written in JavaScript, Java, and Go languages.”

As per recent reports, IBM partnered with Câmara Interbancária de Pagamentos, the Brazilian payments non-profit, for releasing a blockchain ID platform built on Hyperledger Fabric. This platform, named as ‘Device ID,’ will play the role of an authenticator for mobile devices. It is aimed at preventing fraud and other criminal activities. The Brazilian Payment System and nine banks are all set to use the new blockchain verification platform.

The multicloud platform helps enterprises improve data center performance and availability. Multicloud strategies can become time-consuming, expensive, and difficult to manage environments due to scattered visibility, security, and workloads spread across multiple clusters and clouds. The IBM multicloud platform is an ideal choice for enterprises as it integrates all environments in a single view, thereby providing them optimal control over what they govern, see, and automate.