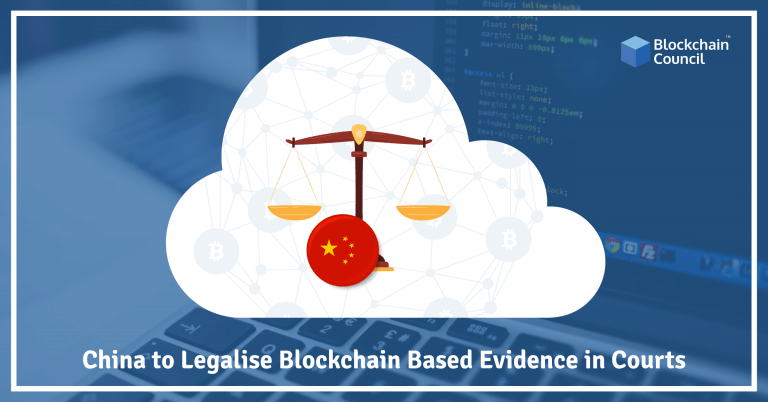 Blockchain Technology has the potential to disrupt almost all the business verticals positively. It comes with myriads of features which can seal the bottlenecks that the current technology offers. Thus, creating a system which is highly transparent and safe. One of the unconventional areas of application of blockchain technology that we can think about is legal cases. Well, this is not just a theoretical concept China has legalised blockchain based pieces of evidence in court.

What is the buzz?

Well, it might sound astounding to many that blockchain can find application in court cases, but yes, with its certain features, blockchain can become an integral part of the legal system. In this blog, I will be highlighting these features of blockchain and what is the initiative taken by China.

Use of Blockchain in legal cases–

As mentioned earlier blockchain use cases in legal issues are unconventional and a new concept. However, countries like China have understood the importance of the same and thus have implemented and legalised the blockchain evidence. But, the question that keeps on pondering is how blockchain is being used in court cases.

The blockchain can store information and offers immutability of data. It lets this technology provide a higher accuracy and precision. Similar to other industries, the legal industry is also trying to transform its operations and make it more effective and Distributed Ledger Technology is here to offer the much-needed change.

With the help of this technology, we can validate records of, and legal firms can easily maintain an accurate chain of custody and other legal activities.

In the present scenario, most of the lawyers are overloaded with a plethora of paperwork. Maintaining the records of all the cases manually is a daunting task. With the help of Blockchain, we can bring all this data on a platform which is easily accessible by the legal advisors and law firms. Moreover, having a record of all the cases on the ledger will make it impervious to hacking or any alteration. Thus, making the entire system foolproof.

The Global Legal Blockchain Consortium aims at making the decentralisation as the core of the business law.  As per the report of PwC (2017), the law firms would use smart contracts for transactional legal services.

The reason for such acclivitous growth is that blockchain offers immutability and safety of data. Moreover, the data is easily accessible to the people in the network. Thus, making it easy for the lawyers to get quick access to information thus saving a lot of time. Blockchain finds application in case of UCC filings, legal opinions, funds transfers, and contracts.

China’s inclination to promote blockchain technology has made it one of the most prominent promoters of this technology. Despite banning Bitcoin at one time, China has made the initiative to promote startups who are working on the application of blockchain.

The recent development in this domain when China announced legalised the blockchain based evidence in court. Internet courts will recognise the digital data which relevant parties submit and have stored this data via blockchain along with digital signatures, hash value, and reliable timestamps.

China has started the world’s first court that handles trials for internet-related cases on an online net court web platform. This January, the court handled its first case with blockchain-derived evidence.

What are the other areas of application of Blockchain in the legal field?

Apart from legal evidence storage, Blockchain finds application in various other aspects of the legal domain. Here is an illustration of the same:

Even today, the legal contracts are written and have physical signatures. With the help of blockchain, we can change this process and have smart contracts replacing the legal handwritten contracts. The smart contracts can be directly executed between the relevant parties having lesser lawyer involvement.

IP or Intellectual Property is the biggest concern for legal firms. Whether in the digital era protecting the intellectual property of images, videos and audio files has become a daunting task. It not only affects the authenticity of the work but at the same time, it also leads to monetary loss of its owner. Companies like  NKOR promise provides a platform where one can register IP and anchor it to the blockchain.

In the present scenario, the notary publics confirms and verifies the signatures on legal documents. However, with blockchain technology, we can preserve these documents digitally as a part of DLT.

Thus, we see that Blockchain does offer some benefits to the legal friends. It will not only simply the work of the lawyers but also saves their time. However, the technology is still at a nascent stage, and we have to see how Blockchain will perform when it becomes a part of mainstream functioning.

When and Why to Use Blockchain Technology?
Scroll to top