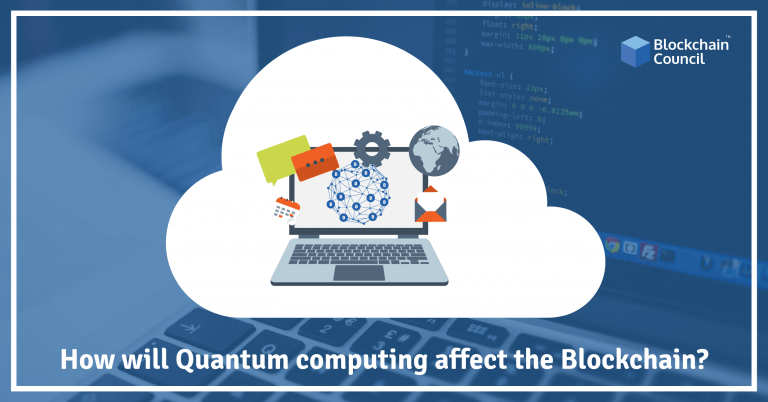 Well, the purpose of this blog is to highlight how quantum computing is going to impact the Blockchain. Well, the answer to this question is that both these technologies are new and are revolutionary in its aspects. Whereas Blockchain is a platform for performing a transparent and hassle-free transaction, quantum computing is the next generation computing machines which will make every work easy and fast.

In case of quantum computing, data analyzation is done using quantum-mechanical components. It makes use of quantum bits or qubits instead of binary digits like we use in the current computing system. The classic computer data points are either 0 or 1, the qubits, on the other hand, have superpositions of the state which means at one time, it has different values. In simple words, the classic computer has two values, i.e., zero, and one but the Quantum computers use quantum bits (qubits) which had multiple values at the same time. It gives an added advantage to the quantum machinery. They can store a large amount of data with lesser consumption of energy. Quantum processes are 100 million times faster than the systems which we are using today.

What does quantum computing have to do anything with Blockchain technology?

In this blog, I will be highlight what can be the impact of quantum computing on Blockchain and cryptocurrencies. Well, cryptocurrencies work on public key cryptography. It means that a pair of keys is used to safeguard the data. Everyone in the network knows this key. However, in case of the private Blokchain, only the owner knows the private key.

The public key system links the two keys together using complex mathematical equations. This link is equal to the factors of a number which is a product of two enormous prime number. For the hackers to extract the private key, the hacker would have to work out the factors of that number which is the product of the prime numbers. Thus the task will tedious and will consume a lot of energy in case the hacker is using the traditional system of computers.

Now let’s bring in quantum computing in the picture; if we have quantum computers in place which are 100 million times faster than the current systems, it will become very easy to work out the mathematic equations, and thus one can easily figure out the keys. Thus, making Blockchain exploitable.

It will be a threat to Blockchain as quantum computing will impact one of the key features of Blockchain like unchangeable data, unalterable and security, thus making Blockchain as highly vulnerable technology.

If the hackers get their hands on a quantum computer, they can hack the cryptocurrency ledger and take complete control of Blockchain.

As mentioned above, classic computers use bits of information the quantum computers make use of qubits which can represent both values in the wide range of superpositions of two states thus making it faster and quicker. It will, on the other hand, affect the security of data and making it easy for the hackers to exploit the data on the Blockchain

Well, the developers of Blockchain still have time to come up with a system which is free from an attack of quantum computing. The best solution for the same is to create a quantum resistant ledgers. A company is doing the same by generating a private key. The key generation process is highly complicated and makes use of complex mathematical equations.

These are just the predictions for both Blockchain and quantum computing. We still have to wait for quantum computers to be there up and functioning, similarly the developers need to work on Blockchain to make it safer and unhackable.

Is Blockchain in a war with other technologies?
Scroll to top