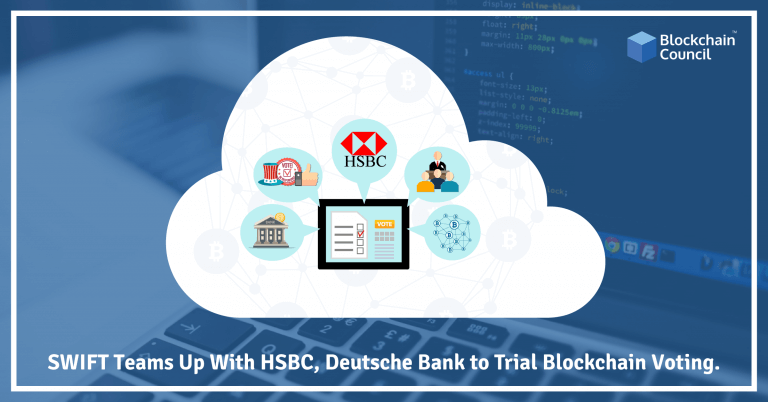 The Blockchain is making its way to mainstream business operations. It has garnered the attention of the world where big names in the industry are eyeing at this technology as the future. A technology that started as the underlying technology of Bitcoin has now become a part of many business operations like retail management, data management, monetary exchange, data exchange, supply chain, etc. The multifaceted application of Blockchain makes it a profitable venture for many companies. Well, we bring another news from the world, SWIFT is teaming up with HSBC and Deutsche Bank to form a transparent and secured Blockchain voting system.

Why Blockchain For Voting?

When it comes to Blockchain then most of the time we associate this technology with supply chain management and monetary exchange, but its applications are much wider. There are various fields where you can find Blockchain implementation and integration. Voting is one such area. Voting is an important aspect that forms the foundation stone democracy of the nation, and hence it becomes imperative that voting remain transparent. Various apprehensions are surrounding the transparency and authenticity of the conventional voting system. There have been incidences where questions have been raised on the functioning of the electoral system. Transparency is the biggest concern, what if the voters could trace whether their vote has gone to the right candidate? It might sound astounding at the moment, but the fact of the matter is that Blockchain has come as a solution that will help in making the voting system transparent and secured. Let us analyze how:

Yes, apart from the latest news coming from the SWIFT team, some companies have already made their mark felt. FollowMyVote is a Virginia based company that creates a voting system which ensures that a vote gets recorded one time for a particular candidate. This information gets permanently recorded into Blockchain ledger. Since Blockchain prohibits any kind of data tampering or alteration, thus it is ensured that there is no hacking of votes. This solves the problem of transparency.

Another company which is using the Blockchain platform for voting is a BIT Congress. The company has proposed whitepaper which highlights how the company is using Blockchain technology along with a token-based system to control voting, ensuring that the vote remains unchangeable. The company makes use of VOTE token. This ensures that there is no change in voting once done.

SWIFT or Society for Worldwide Interbank Financial Telecommunication is one of the leading financial messaging networks. The company has collaborated with Singapore Exchange or SGX and other prominent banking institutions like Deutsche Bank to hold a Blockchain based e-voting platform. This platform works on a proof-of-concept.

This project will be first rolled out in the Asia Pacific region. The aim of this project to decipher whether Blockchain is a good alternative to the conventional paper-based voting system.

Who Is The Participating Bank?

SWIFT is launching this project in collaboration with prominent banking institutions like :

The Objective Of This Project:

SWIFT has defined four objectives of this move:

The first part of the project will roll out in the first half of 2019. A transparent e-voting system was long, and with the intervention of Blockchain technology, things will become even more transparent.

Blockchain technology offers many features and the one aspect which SWIFT is targeting at includes the following:

All these features form the underpinning of the transparent voting system that SWIFT is eyeing.

The crux of the matter is that Blockchain is a leading technology and so it is gaining more and more appreciators with each passing day. Its intervention in the voting system despite being at a nascent change is the transformational change.

The Top 50 Cryptocurrencies
Scroll to top