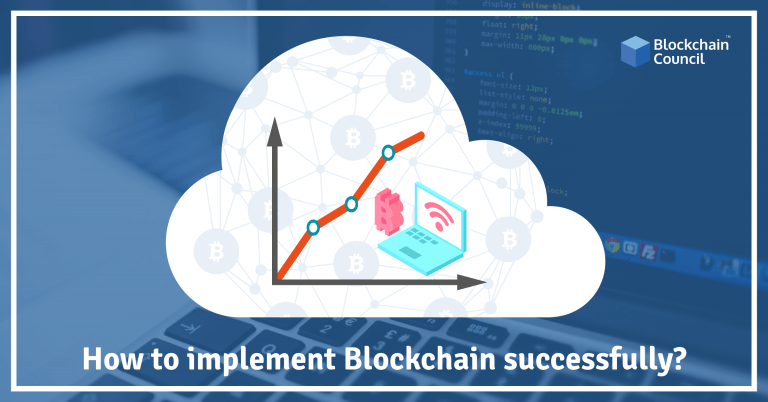 Blockchain technology makes perfect sense for businesses operating in a wide range of industries. It is one technology which has the potential to solve numerous daily issues. While some organizations are coming up with proof of concepts and many are stalling in the research phase, only a very few are in a stage where they have successfully implemented blockchain and have the technology up and running in their enterprises.

Let us first understand the basics of a blockchain

A blockchain is one which stores a record in blocks which are linked to one another by way of a cryptographic technique which creates a digital, distributed ledger. The ledger can be shared and verified by anyone who has access to it. This eliminates the need for expensive third-party verification. The cryptographic signature is the one which gives the blockchain the status of an immutable ledger, in other words, tamper-proof.

For the successful implementation of blockchain, it is essential to learn the right strategies to implement blockchain. Buckle up your seatbelts as this article will cover everything you need to know for setting up your own blockchain fuelled business.

The steps involved are:

1. Identifying a use case

The first and foremost is to identify the use case. The key to developing any blockchain-based system is to figure out the exact problems that you are trying to solve and if blockchain is the right solution for the same. Understanding the process inside out and knowing the bottlenecks in the process is essential. Identifying a use case refers to the process of identifying, clarifying, and organizing your needs for a blockchain. This adds clarity to your goals. It is always best to start small. Start with pilot-blockchain use cases. Explore, test, use and analyze them, following which you can implement it on a larger scale.

Here is a list of criteria which has been developed by PwC to help organizations analyze if blockchain is the right solution for them.

If your answer was ‘Yes’ to a majority of the criteria, blockchain is the right solution for you. Some of the industries which have adopted blockchain technology are banking, insurance, healthcare, real estate, Internet of Things (IoT), corporate and public governance, supply chain management, and education.

As there is a range of blockchain solutions which exist, it is crucial to choose one which suits your purpose. Some of the popular blockchain platforms are:

It is important to do an adequate amount of research as it is often easy to get misled by impressive marketing tactics. While choosing a blockchain platform, make sure it suits your budget and ascertain whether they possess an open-source station and whether it has an organized technical team. It would be essential to get advice from someone who has prior blockchain experience. They can be from your team or can even be a third-party blockchain consultancy or a company.

Blockchains can be private or public, permissioned or permissionless, and centralized or decentralized. Out of the many blockchain platforms, Ethereum is the most popular and commonly used platform primarily due to its dynamism and responsiveness. But for businesses just starting with the blockchain, the most effective option would be to use Blockchain as a Service (BaaS). This offers a pre-designed blockchain which can be customized according to your needs. This helps save time and money spent on developing infrastructure and finding skilled human resources. Some of the renowned customized solutions offered by tech giants are Microsoft’s Azure, Oracle, and Amazon Web Services (AWS).

To initialize the blockchain, the first block must be created manually. This block must have all the characteristics of the chain. These are then shared at all the network nodes. A file in JSON format is created to define this block. Several parameters such as Nonce (cryptographic hash which generates a random value) and Timestamp (the validation time between two successive blocks) must be specified. After the JSON file is filled in, the client Geth is responsible for creating the folder containing the blockchain and initializing it.

Protocol refers to resolving a mathematical problem which requires a large amount of calculation. When a miner comes up with a solution, it must be easily verifiable by all. The first person who finds the solution gets the right to write the next block. The difficulty level of the problem is adjusted in real time based on the total power of the network. The blocks are written at regular intervals. This system protects against hacking and spam attempts. Consensus protocols create an irrefutable system of agreement between the devices in a distributed network, thereby preventing system exploitation. One can choose from a wide variety of consensus protocols available for the blockchain.

Some of them are:

An ecosystem is very important for a blockchain as it works best when a large number of stakeholders get involved. Creating a community within an industry or an organization which understands the technology and its potential will help improve trust among companies.

As per a report prepared by PwC, stakeholders must decide:

Blockchain needs to be designed carefully. It must be one which is equipped to solve organizational issues. It must fit in with the existing processes. If a blockchain doesn’t fulfill these factors, the processes need to be revised to lay the groundwork for blockchain.

As blockchain is still new, regulations for the same are very limited. There is a high possibility for this to change in the future, and hence, organizations need to monitor the changing regulatory framework continually and also actively get involved in shaping it. Each country has different regulatory approaches to the blockchain.

For example, Singapore and Switzerland are trying to regulate tokens to spread the application of blockchain technology, China supports the regulation of cryptocurrency, though it has banned it. In the US, individual states spearhead regulatory efforts rather than the federal government. PwC suggests that businesses must work with regulators to help increase the application of blockchain technology.

As we now know, blockchain was initially created to cater to the trade of digital currencies. But soon after, the tech-savvy world realized that there are numerous options to employ blockchain technology in their companies successfully. I hope this article provided you with insights about points to keep in mind while implementing blockchain. This will certainly serve as a roadmap to blockchain implementation. Though there are chances for you to get easily frustrated at first, it is important to remember that blockchain, though a new technology still, is truly the future of digitalization and technology.