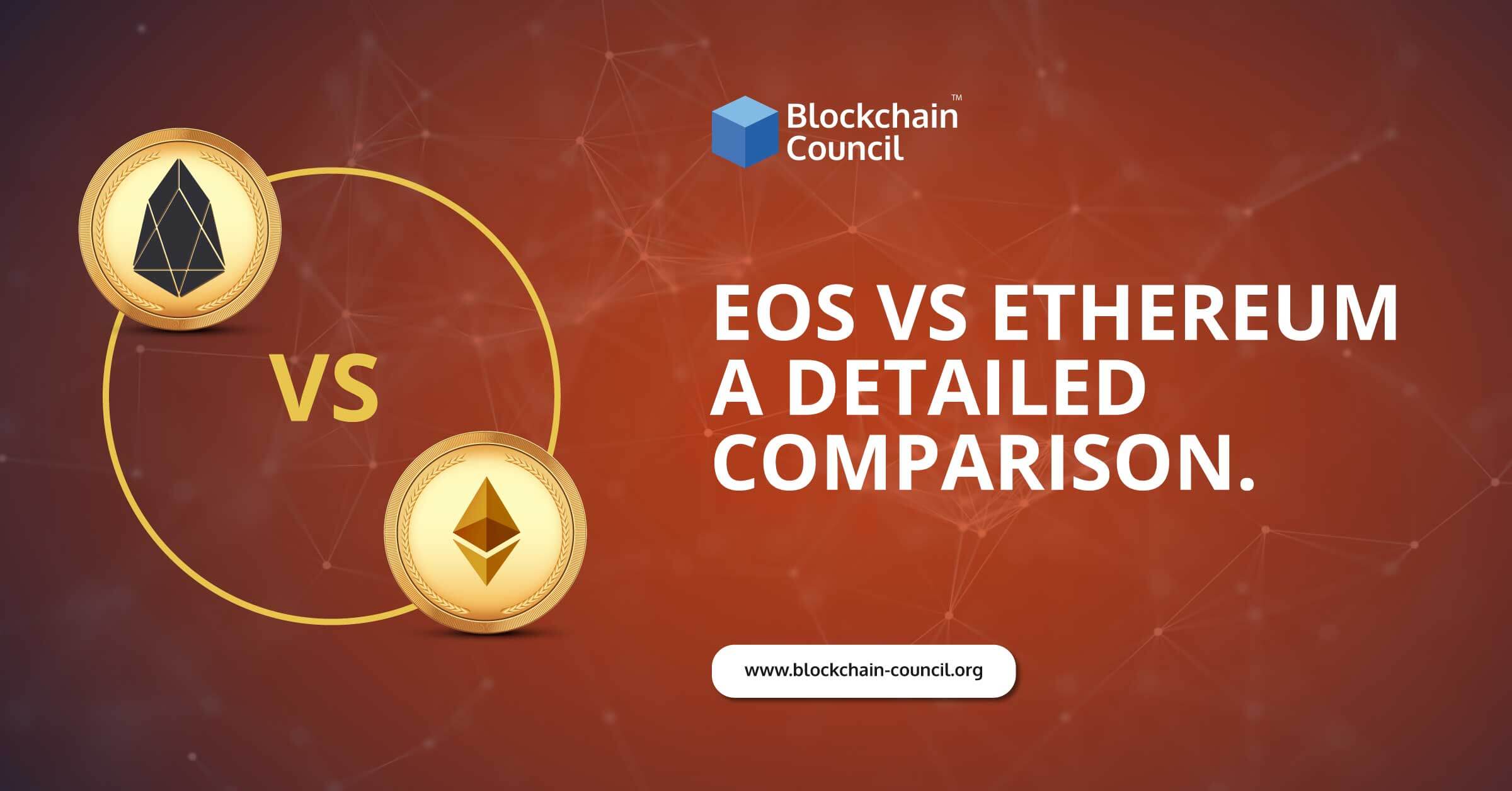 Blockchain and cryptocurrency are the two buzz words which are currently ruling the technological sphere and taking the world by storm. Each day, cryptocurrencies are becoming more and more popular, and Ethereum is one such blockchain platform which we have constantly heard of in the past decade. It has gained worldwide acceptance as it helps create smart contracts. It is credited with being the first smart contract-based blockchain platform after Bitcoin. Ethereum is also regarded as the Second Generation of Blockchain Technology. With an increasing number of cryptocurrencies emerging in the blockchain space, one such cryptocurrency which currently challenges the capabilities of the Ethereum blockchain is EOS.

In this article, we will break down the significant areas of difference between the EOS and Ethereum blockchains, which sets these two apart.

So, What is A Blockchain?

A blockchain is one which has no central authority or entity controlling the network. A blockchain is a decentralized, distributed digital ledger of economic transactions which are managed by a cluster of computers and is a perfect example of a democratized system. It is a shared ledger in which each and every information which is stored can be viewed by anyone. In technical terms, a blockchain can be defined as a time-stamped series of immutable data which is managed by a cluster of computers. Each block in a blockchain is connected to each other through cryptography. This enhances the security of a blockchain.

EOS is a smart contract blockchain platform which was developed by a company named Block.one. It was created to compete with Ethereum. Apart from performing smart contracts, it is also capable of creating fully decentralized applications which look just like normal solutions. Block.one is a company which is located in the Cayman Islands and it launched EOS in 2017. The ultimate aim of EOS is to be the cheapest, fastest, and most scalable smart contract blockchain in the world. EOS is also a decentralized blockchain, which means that it is not controlled by a central authority and just like the Ethereum blockchain, it allows for transactions to be verified by the community. EOS is the cryptocurrency of the EOS blockchain. Dan Larrimer is the founder of EOS, who is also the creator of Steem and Bitshares platform.

Ethereum is an open-source blockchain platform for decentralized applications launched in 2015 by Vitalik Buterin. Ethereum allows people to send and receive funds without the need for a third-party entity such as a bank. Ethereum is the first blockchain protocol to install smart contracts, self-executing contracts in which the terms of a contract between the buyer and the seller are written in the form of computer code. Ether is the native currency of Ethereum. The Ethereum blockchain is programmable, and this means that developers can leverage it for building new kinds of applications.

Talking in terms of scalability, both blockchains have challenges which need to be addressed. According to EOS Developers, EOS currently processes more than 10,000 transactions per second. EOS has a feature called inter-blockchain communication. This creates another EOS blockchain which can handle more transactions. These blockchains can connect to each other, and there is no limit to the number of EOS blockchains which can be created. If EOS raises the bar and scales to more than a million transactions per second, will gain the status of being the most scalable blockchain and one which can handle any real-world application.

EOS is based on the ownership model. You are the owner of the resources which are provided to you such as CPU, RAM, and Net bandwidth, and there is no need for you to pay rent on an EOS blockchain. EOS’s aim is to be a decentralized operating system rather than a decentralized supercomputer, which can be used by DApp developers to create and code various DApps. In an EOS blockchain, since the resources provided are scarce, EOS does not allow you to hold on to tokens for too long. The account of the EOS members who do not use their tokens for three years will be terminated. There is a stacking pool which allows users to stack their EOS coins. Based on this, the operating system resources will be provided. You need not pay any transaction fees on the EOS network to complete your transactions. You can take back your EOS coins anytime you need by unstacking them. You can determine the future cost of your projects on the EOS blockchain.

Ethereum operates on a rental resource mechanism which implies that one would have to pay transaction fees to use an Ethereum blockchain. Any transaction initiated on the Ethereum blockchain network carries transaction fees which must be paid using the Ether coin. This fee acts as a fuel for completing the transactions and ensures the security of the network. If the price of Ethereum increases in future, it implies that more Ether must be paid as transaction fees. Ethereum aims to build a worldwide supercomputer which will rent out its computation power to developers all over the world. This ‘computational power’ is termed as ‘Gas,’ and to execute each step of a smart contract, a certain amount of gas must be spent.

A consensus mechanism or consensus algorithm is a computer science process which helps reach a consensus about a single data value between distributed processes or systems. Ethereum uses the proof-of-work consensus algorithm. Here, the blockchain generates a random puzzle which must be solved for a transaction to be confirmed. This puzzle is usually very difficult and needs a computer node to solve it. Anyone who wants to contribute to the Ethereum network can do so by connecting a GPU device to the network. They are called miners, and they compete amongst themselves to solve the puzzle and be the one to bag the Ether reward. This consumes a lot of electricity, which is not good for the environment. So, Ethereum plans to shift to the proof-of-stake consensus mechanism, which is better for the environment and will also allow the network to process more transactions.

The consensus mechanism used by EOS is the Delegated proof of stake or DPoS. DPos was also invented by Dan Larimer, the founder of EOS. In a proof-of-stake system, anyone with a certain amount of coins can help verify transactions on the network. The chances of winning the reward depend on the number of coins you have. But in DPoS, one who holds coins cannot validate transactions but can vote on who should verify transactions. It is similar to democracy. The people whom you can vote for are called ‘block producers.’ They are the ones who verify transactions and gain rewards. Totally, 21 block producers are responsible for the security of the network.