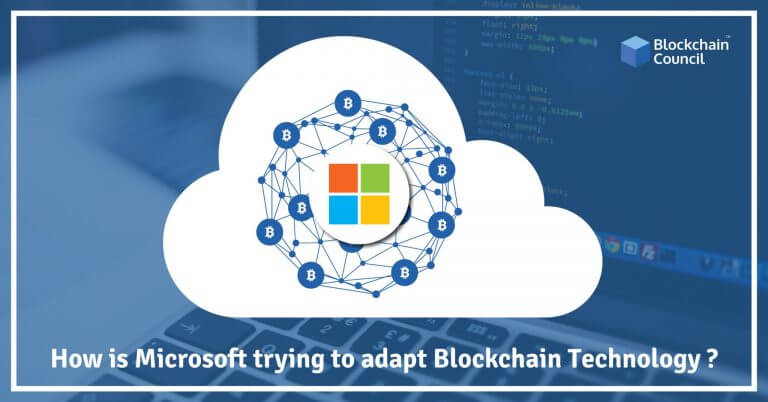 Whether Bitcoin or Ethereum abates, Blockchain is here to stay for long.  This technology has paved the way for many developments and thus has become an area of research and experiment for many IT companies. The biggest name which is trying to adopt this technology is Microsoft.

Before looking into the use of blockchain by Microsoft, it is important to run through on its concept. It is a transformational technology which has information shared with people in the network. Its distributed and decentralized format makes it useful for various business aspects. Furthermore, the information or transaction as we say, are stored in chronological order. Immutability and transparency are the key features of this technology which makes it so popular and this is the reason that companies like Microsoft and IBM have taken an intuitive to develop blockchain-based applications.

In this article, I will be highlighting, how Microsoft is planning to come up with blockchain based solutions and its application.

Plans of Microsoft for using Blockchain-

The technology giant Microsoft announced the release of the Confidential Consortium (Coco) Framework. Coco is an Ethereum-based protocol. It will allow companies to operate on the Ethereum Blockchain.  We already know that the blockchain is a new and a decentralized way to store data. It also ensures that the data is safe and incorruptible.

The Coco framework allows different blockchain network to connect with each other to solve some issues that have slowed down because of privacy concerns, speed, etc. Coco, as mentioned above, is currently compatible with Ethereum.

The aim of Microsoft behind the development of this technology is to make blockchain easier for businesses. The traditional blockchain is developed for transparency, using the same framework for the enterprise users can create problems like confidentiality issues. Coco is the solution to this. It couple the blockchain technology with established security protocols and thus making the system entirely safe for the Entreprises. Furthermore, it also puts an end to the problem of confidentiality and scalability.

The company also plans to use the blockchain technology for giving more control to the individuals’ digital identity. Microsoft plans to create an ecosystem which supports digital identities.

There are four basic components of this :

The objective of this initiative is to make blockchain more scalable.

You would have heard about Microsoft Azure. It is a way to help the companies survive in the era of safe multiparty collaboration by delivering platforms and services which any company can use to improve their shared business processes.

Azure is an open, secure and flexible platform which supports a large number of the distributed ledger that addresses to specific business and technical requirements like operational processes, security, and performances.

Azure is a quick, low cost and low-risk platform to come together and experiment with new businesses process. All this is backed by cloud platform which ensures that the data and the information are safe and secure.

Apart from the development mentioned above, Microsoft came together with Mojix  to enable blockchain-powered smart contracts to create seamless supply chain management. The objective behind this was to reduce the overall cost of the business, propagate cooperation and increase the trust amongst the retailers, suppliers and the logistic partners

Further, it collaborated with Tierion . It aimed at providing services that manage, generated and validates attestation.

The step to make digital identity a reality came true with Microsoft and Accenture alliance. They came up with an ID2020 project which aims to solve the problem of identity or the deprived people. Today one-sixth of the old population is denied the basic rights because they lack identity. With the help of this technology, Microsoft aims to create identities for this deprived people.

In June, BankChain, Microsoft collaborated with a consortium of Banks in India for using Azure blockchain As a part of this partnership, the entities will develop various projects on blockchain use cases, the likes of which include, KYC, anti-money laundering and halt the financing of terrorism.

A prototype for digital car maintenance came up with Microsoft coming together with Renault and VISEO.

Microsoft worked with to develop proof of concept.The aim behind this was to test the use cases of blockchain in trading of energy.

The global market for blockchain is ever-increasing, and in 2017 it stood at $708 million. It is anticipated to reach the mark of $60 million by 2024. This growing figure shows the huge demand for blockchain technology in the real world use. Companies like Microsoft are powering blockchain trend, and they are making their clients transition to blockchain on Azure. With such development taking place, we will soon see some interesting developments in this technology.