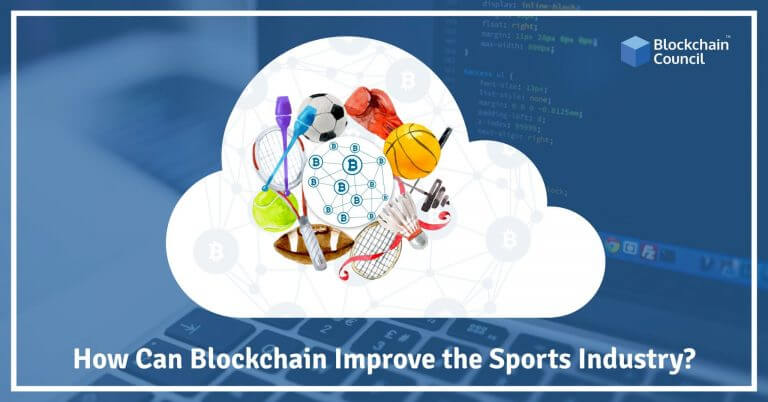 The Global Sports Industry is a behemoth in the world economy encompassing sports clubs, merchandise sales, advertising, media rights, and many other related fields and is estimated to be around USD 1.3 trillion. As blockchain and smart contracts become more commonplace in businesses around the world, it is only a matter of time before the sports industry also evaluates the use cases of blockchain technology. From sports rights management and asset tracking,  to fan engagement and harnessing of big data, blockchain has a lot to offer the sports industry. We take an in-depth look at some of the ways in which blockchain can improve the sports industry.

What Is Blockchain and Smart Contracts?

Blockchain is distributed ledgers of information that are not controlled by a single entity such as a government or a corporation and are accessible to everyone freely. Instead, they are collectively owned by the users of network known as miners. Miners lend their computing resources to help secure the network and in return are rewarded in the respective cryptocurrency. This ensures that no single entity in the world can amass enough computing resources to attack the network to modify the information stored on it. Second generation blockchain platforms like Ethereum added features like smart contracts which allow for code to be executed on the decentralized networks. Smart contracts have opened up all these new applications for “programmable money” which were not possible until now.

Challenges Faced By the Sports Industry

The rise of eSports and other forms of internet games has led to a gradual decline in sports attendance across all the major world sports. For instance, the attendance at Major League Baseball (MLB) games in 2018 dropped to its lowest in the last 15 years, around 9% lower than the attendance in 2017. The drop in attendance corresponded to an estimated USD 350 million declines in revenue from ticket sales and much more money in the form of merchandise sales and ad revenue. In a recent report about the trends that affected the sports industry in 2018, Deloitte claimed that advertisers will spend more money on digital and social channels to reach millennials. This is a challenge for the Sports industry as a larger percentage of their audience is in the older age group above the age of 30.

Doping is a significant issue in the global sports industry because of its competitive nature and athletes are required to undergo regular medical examinations for that reason. As discussed above, blockchain can allow us to create more reliable stores of data which would be resistant to all types of tampering. This would ensure that the clubs or federations managing the athletes are not able to manipulate data for hiding doping cases.

Smart contracts also enable us to create complex arrangements for funding up and coming athletes which was hitherto impossible. A new London-based blockchain startup, SportyCo, will allow investors to invest in professional athletes with the help of smart contracts and distributed ledgers. For instance, if a young athlete needs USD 50,000 per year for 3 years for getting access to world-class training, the athlete can set up an arrangement with SportyCo investors. According to the arrangement, the athlete will give away, say,  25% of their entire income for the next ten years. Now when the athlete excels in their sport and earns money to the tune of a million USD annually due to sponsorships, the investors would be able to recoup their investment in almost no time. SportyCo has been endorsed by the likes of legendary football players Ronaldinho Gaúcho and Roberto Carlos.

Blockchain can be used as reliable data banks and can be used to log everything from athlete statistics to world records and biometric measurements. The information can be automatically stored in the ledger using distributed oracles eliminating the chance of getting faulty data.  TV channels pay billions of dollars to the Europa League and the Champions League for exclusive access to broadcasting rights. Blockchain can be used to set up pay per view streams that are popular in sports like Ultimate Fighting Championship. Cryptography involved in blockchain can help authenticate users online without going through cable providers who act as middlemen.