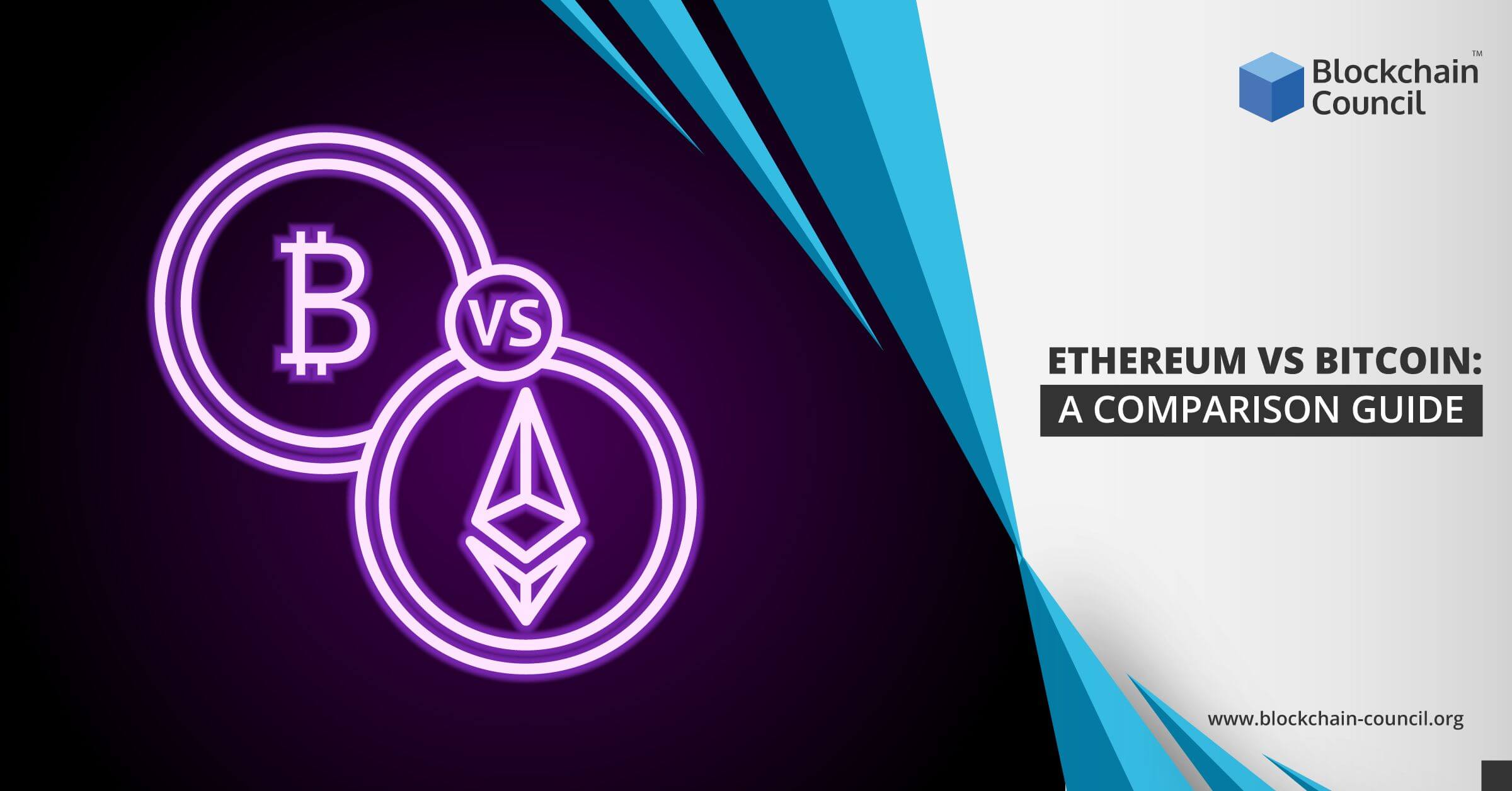 When you enter the fascinating new world of crypto, one of the first questions you’re going to ask yourself is about the discrepancies between Ethereum and Bitcoin. It’s pretty complicated, isn’t it? You might think of Bitcoin and Ethereum, as many of us do, such as Apple and Microsoft crypto. However, unlike Apple and Microsoft, they are different from each other. Both of them have very different goals in mind. For a detailed study on cryptocurrencies, you can join Online Degree in Cryptocurrency.

So, let us dive deeper into the competition of Ethereum vs. Bitcoin.

Basics of Ethereum and Bitcoin

Here we’re going to look at some of the basic features and details of Ethereum and Bitcoin.

Primary Differences Based on

Ether is built to fuel Ethereum’s network and power transactions, while Bitcoin is known to be the currency of real-world operations.

Think of digital currency when you think of Bitcoin. Speak of smart contracts when you talk about Ethereum. This is the trouble-free way to understand and remember the main difference between Bitcoin and Ethereum.

Bitcoin is a store of cash and a way to transfer money to someone else. Ethereum is also a way to give money to others, but only when certain events happen.

Ethereum also differs in that it serves as a building platform for dApps / smart contracts that allow it to submit value-representing tokens. Such values can be anything other than digital currencies, making them separate from bitcoin.

Ethereum is six years older and more advanced than Bitcoin.

The transactions of Ethereum run on smart contracts and look like this:

The time of the Ethereum block or transaction speed is only seconds. The block time of Bitcoin, however, is minutes.

Bitcoin is limited to 21 million coins. It provides a balanced supply and demand for a store of inventory. Ethereum, however, is not limited to this. Ether’s output is continuous. But the supply of Ether will slow down a lot over time. Many blockchain experts have claimed that the total number of coins would not be more than 100,000,000 ETH in the immediate future.

Who is Better, Ethereum Better or Bitcoin?

There are benefits of using both Bitcoin and Ethereum. Bitcoin has a smaller supply of coins and is more liquid than Ethereum, but Ethereum has better infrastructure and more applications than Bitcoin does. Based on the fact that Ethereum has more cases of usage than Bitcoin and thus serves a higher purpose, a conclusion can be drawn that it is a more robust overall Bitcoin alternative. It may not be the best bitcoin alternative, though, as other cryptocurrencies have the same intend as bitcoin and run on brand new technology and protocols. This is not to suggest that these other alternatives are better than Ethereum. It just means that if they’re more like Bitcoin, one of them may be the better bitcoin substitute. This doesn’t automatically mean that they’re a better alternative to Ethereum!

Who Has Better Technology?

The development of Blockchain is also in its early years. That’s why Ethereum and Bitcoin are getting continuous updates. Ethereum, however, is already a clear winner, as we saw above.

Can Ethereum and Bitcoin Co-Exist?

It is clear from the concept of Ethereum that it does not intend to be an alternative to Bitcoin. Alternatively, it runs alongside it as it runs after a particular target. With all this said, it is essential to note that although Ether is not supposed to be a store of value, it has become one. Here are a few examples of daily life:

Bitcoin and Ethereum have very different objectives. Even if you’re not a severe crypto investor/trader, you’re not going to go wrong with buying BTC or ETH tokens. Both add tremendous value to the Crypto culture. The best way to learn about Ethereum or to become a certified bitcoin expert is to toggle through courses available on our website blockchain council.

What is a Blockchain Oracle? A Detailed Overview
Scroll to top