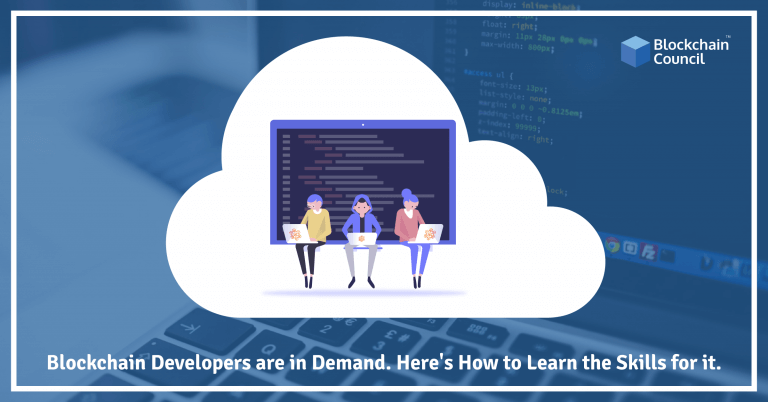 Ever since the huge bull wave of December 2017, interest in Blockchain technology and cryptocurrencies, in general, has been ever increasing. Since blockchain is an emerging technology, there aren’t enough qualified developers that can be hired. That has led to blockchain skills being very valuable in the job market with jobs ranging from $150,000 to $250,000. However, a lot of people remain confused as to how to learn the skills required for blockchain programming. Second generation blockchain platforms like Ethereum have enabled whole new spheres of activity with smart contracts and decentralized applications. Before getting into the specifics, let’s first examine what a blockchain’s underlying principles are and how do they work.

How Does a Blockchain Work?

A Blockchain is simply a decentralized ledger of data that is resistant to tampering. Similar to how a traditional database works, a blockchain can be used to store and retrieve information. But what separates a Blockchain from a database is the fact that information stored in a blockchain cannot be modified. In fact, to modify an entry in a Blockchain requires a network-wide consensus. The power of blockchains come from the fact that it does not rely on a centralized service to ensure security but, instead, uses a consensus mechanism to agree upon a single shared ledger. The network is maintained by a group of miners who share their computing resources to secure it.

Like any other programming venture, blockchains require a basic understanding of the high-level development concepts like Object Oriented Programming and Fragmentation. A decentralised application typically consists of two parts – a front end that is deployed on a centralised service that the user interacts with, and a back-end that relies on the Ethereum Virtual Machine to handle the computations for the platform. The front end is typically developed similar to any other web application using a web stack like HTML, CSS, AngularJS, and Node.JS. The backend is the part that involves blockchains and requires a good understanding of smart contracts. They can be coded in Serpent (similar to Python), Mutan (similar to Go), LLL (similar to Lisp) and Solidity (similar to C++ with some JS concepts). It is, however, important to keep in mind that a blockchain should not be used for very heavy computation but, instead, for security-sensitive applications.

In addition to these programming languages, there are many blockchain developer tools that are indispensable when it comes to real-world development.

Interactive Console – An interactive consoles make it much easier to make changes to the script in a more dynamic fashion. The easiest way to get an interactive console for debugging, configuring nodes and using a wallet via command line is to install the Go Ethereum JavaScript Console.

Test Net – A test net is a replication of the main Ethereum network that runs locally. Running smart contracts on the Ethereum main network is going to cost developers a lot of Ether. So instead, learners and developers use a local test network so that they can test their code before deployment. Geth is the easiest way to set up a test network.

Solc Compiler – After writing a contract in Solidity, developers would require a way to compile the program – that’s where the sole compiler comes in handy. It is based on the C++ Ethereum library and is more effective for larger programs than the browser-based Cosmo compiler.

Want to start your career as a Blockchain Developer? Check out our certification on Blockchain development.

Why are Crypto Exchanges seeking Security Licenses?
Scroll to top