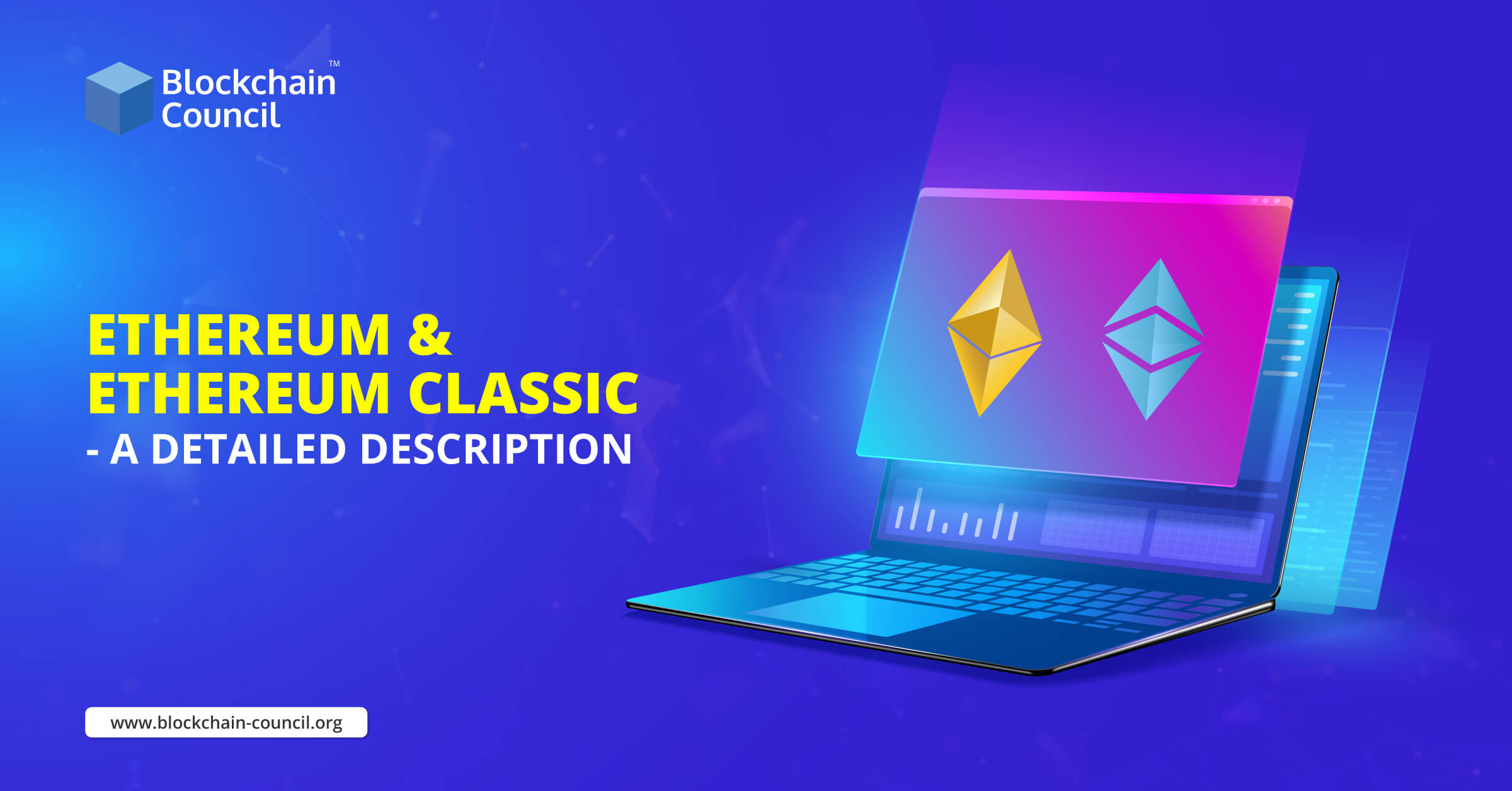 Curious to learn Ethereum and want to become a certified Ethereum Developer? This article provides an overview of Ethereum and its version Ethereum Classic, covering all the important terms related to the topic.

The battle between Ethereum and Ethereum Classic is one of ethics and ideologies. Ethereum is a software platform that runs on a network rather than running on a single computer. The goal of Ethereum is to offer blockchain developers a decentralized trust-less platform to build decentralized applications(dApps). Such apps run on the Ethereum blockchain, and its execution is monitored by thousands of peers, who secure the blockchain. Ethereum enables various applications to be built on top of it, and one such application was a DAO known as Decentralized Autonomous Organization.

Ethereum Classic is just the other version of Ethereum that existed before the hard fork of Ethereum, resulting after the DAO attack.

Want to build your own dApps? Get started with Ethereum certifications now.

Before understanding the major differences between Ethereum and Ethereum Classic, it is crucial to learn and understand a few important terms. So let get started.

What exactly is DAO?

The entire ecosystem of Ethereum works on the basis of smart contracts. The smart contract is like a self-operating computer program that executes when specific conditions are met, but it only takes place when someone initiates the transaction. Decentralized Autonomous Organization was a complex smart contract that was going to revolutionize Ethereum, but this smart contract (DAO) is said to be the most crucial moment in the ETC & ETH split.

DAO was meant to operate as a venture capital fund that was going to fund dApps built on the Ethereum ecosystem, and its working was quite simple.

If anyone wanted to have any say in the direction dApps that would get funded, then one has to buy “DAO Tokens” using Ether as the currency. Such tokens were signs that one is officially a part of the DAO system.

One hacker spotted a defect in the DAO’s code and drained 3.6 million Ether into his personal account, which led the Etheruem community into panic mode, and hence Dao was breached.

Although the hack/attack happened because of an issue in the DAO, and not because of the problems in the Ethereum itself, the DAO attack incident shattered the beliefs that people had in cryptocurrency and blockchain space.

Note:  Ethereum had no blame in what happened with the DAO because Ethereum runs in the background while DAO runs on it.

The Concept of Forking

Forks in the blockchain are essentially a split in the network of blockchain. Forks are of two types.

Soft Fork– It is a change in a cryptocurrency protocol that is backward-compatible, which means that non-updated nodes are, however, able to perform transactions and push new blocks to the blockchain, and it’s their choice whether they want to update or not.</sp

Hard Fork–  A hard fork is a change in a cryptocurrency protocol, which is incompatible with the previous versions, and once it is utilized, there is no going back whatsoever. That means that nodes that do not update to the new version won’t be able to process transactions or push new blocks to the blockchain. Hard forks are generally useful in improving an existing protocol or even to create a new, independent protocol and blockchain.

When Ethereum was introduced, it started as a single Blockchain. But after the DAO attack, Ethereum decided to go with the concept of Hard Fork( as implementing a soft fork would result in a “Denial Of Service” attack).  This proposal caused a massive controversy in the community, and there was an Ethereum split. The people who were “Anti-Hard Fork” refused to update to the new blockchain and decided to remain in the old blockchain calling it “Ethereum Classic.”

What is the impact of the DOS attack? It divided the Ethereum ecosystem into Ethereum and Ethereum Classic. People who were opposed to the hard fork chose to stick with the original chain announcing it “Ethereum Classic.”

Let’s figure out the point of differences between ETH and ETC.

Today, Ethereum is growing at an exponential pace and is continuously updated with the latest changes. It has a higher hash-rate than ETC. When it comes to problem-solving, ETH has reversed the DAO attack and given back the stolen money to its rightful owners. As Ethereum is highly efficient, it is backed by a group of over 200 corporations known as Enterprise Ethereum Alliance (EEA) which aims to use the blockchain technology to run smart contracts.

The only limitation of ETH is that it goes against the policy of immutability.

When it comes to Ethereum classic, it has only one advantage over ETC, and that is it stays true with the philosophy of the immutability of the blockchain.

Unlike ETH, it is not much popular and doesn’t get access to all the new updates made in the ETH chain.  Ethereum Classic is not backward compatible with the Hard Fork; thus users of ETC won’t be able to enjoy the updates that are built on Ethereum.

Ethereum is not just a currency. It is a platform where people can build decentralized apps that will dictate the future. To end up the discussion, we can say that future is bright for ETH, and it will keep on growing. If you have ever thought of investing your time in learning Blockchain and Ethereum, this is the right time to get your career a head start as Ethereum developers are great in demand.