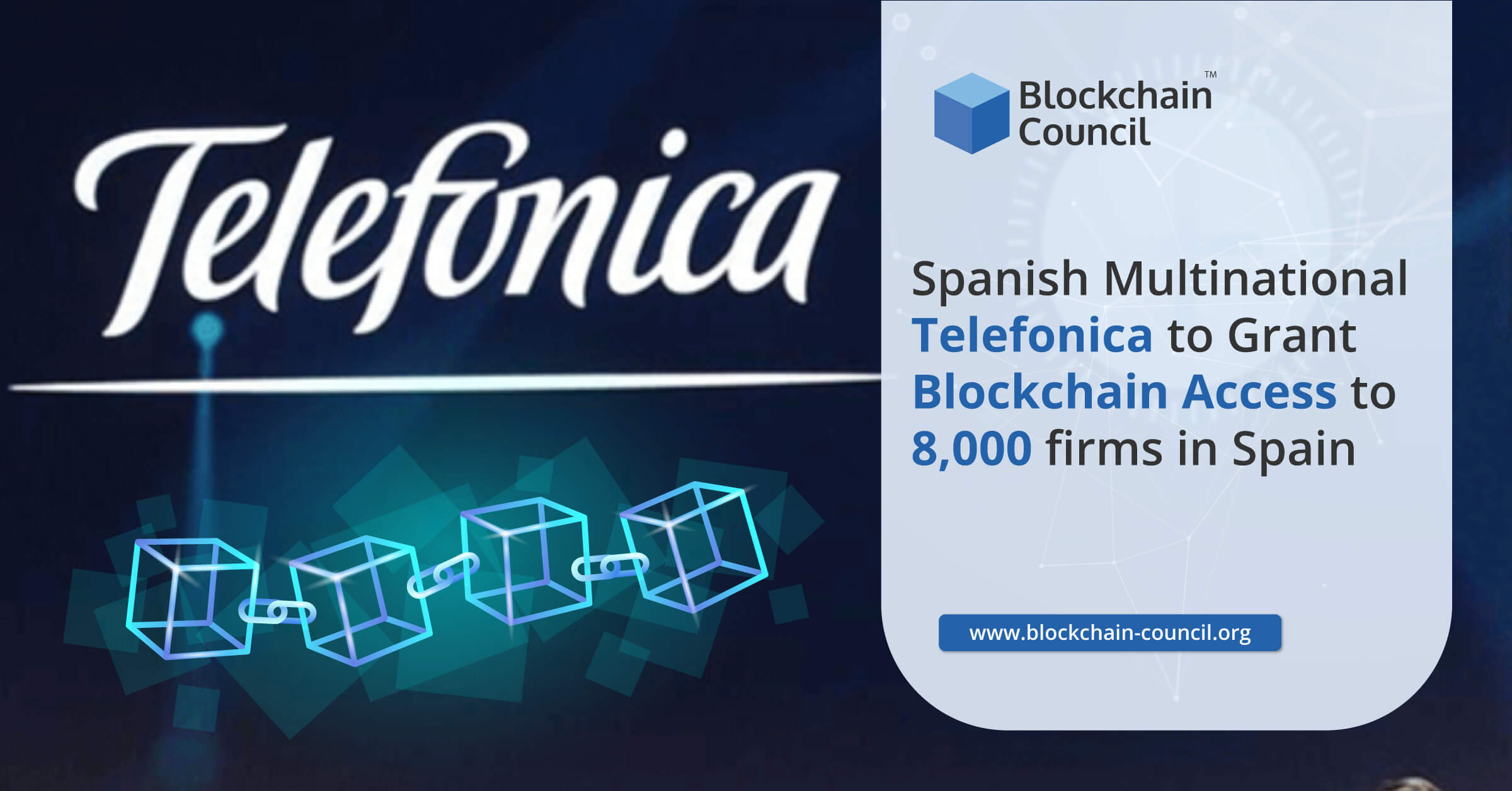 As per news reports, Telefonica, the telecommunications giant, will soon grant access to its blockchain to 8,000 firms in Spain, through its partnership with the local Association of Science and Technology Parks (APTE). As per a report published by TotalTele, the telecom news outlet, Telefonica will be deploying Hyperledger-based blockchain nodes at APTE’s 52 sites.

Telefonica is known to be one of the largest telecommunications companies globally in terms of the number of customers and market capitalization. Telefonica helps facilitate communication among people by providing them with secure and cutting-edge technology. Headquartered in Spain, it operates on the vision of simplifying people’s lives and aims to promote progress in a direction that will create a positive impact on the world both environmentally and socially.

During the testing period that will be for a duration of three months, businesses will be encouraged to experiment on the network with their own tokens and will also be allowed to develop applications on the network. In November 2018, Telefonica partnered with IBM to apply blockchain technology to manage international call traffic to mobile phones.

In April 2019, Telefonica partnered with IBM to launch its Cloud Garden service to simplify the adoption of emerging technologies such as AI, big data, and blockchain. Maria Jesus Almazor, the CEO of Telefonica Spain, claimed that the project would be very beneficial to the firms housed at Spain’s science and technology parks. She also stated:

“Companies housed in these scientific and technological parks will be able to benefit from the advantages of blockchain technology without having to face the inherent complexity of it, or have to dedicate resources to acquire the knowledge necessary to make the most of it.”

As mentioned on the official website of APTE, a science and technology park generally refers to a physical space that deals with research centers and educational institutions that promote knowledge creation. These parks are equipped with a stable managing body that encourages technology exchange and innovation between companies and firms participating in its function.

As estimated by Crunchbase, a platform that helps find business information about companies, Telefonica’s annual revenue is estimated to be $54.1 billion. As reported by the website, the telecom firm has also invested $5 million in the seed funding round of Zamna, the blockchain-based data verification platform. In February, there were news reports about Microsoft partnering with Telefonica to develop blockchain and artificial intelligence innovation.

In today’s context, there are many telecommunication firms that are coming forward to invest in blockchain technology. According to news reports, in November 2019, Malta Enterprise, the Maltese government agency supporting business development, signed a memorandum of association with the firm T-Systems.

In September 2019, Union Mobile, South Korea’s mobile carrier, announced the launch of its blockchain project, ELYNET. With the aim of motivating more firms to adopt blockchain technology for their business operations, the Enterprise Ethereum Alliance published a collection of blockchain use cases for the telecom industry. This document that is free and open to the public contains information on ways of using blockchain technology to streamline internal operations and business transactions.

How Blockchain Can Solve the Global Retirement Crisis?
Scroll to top