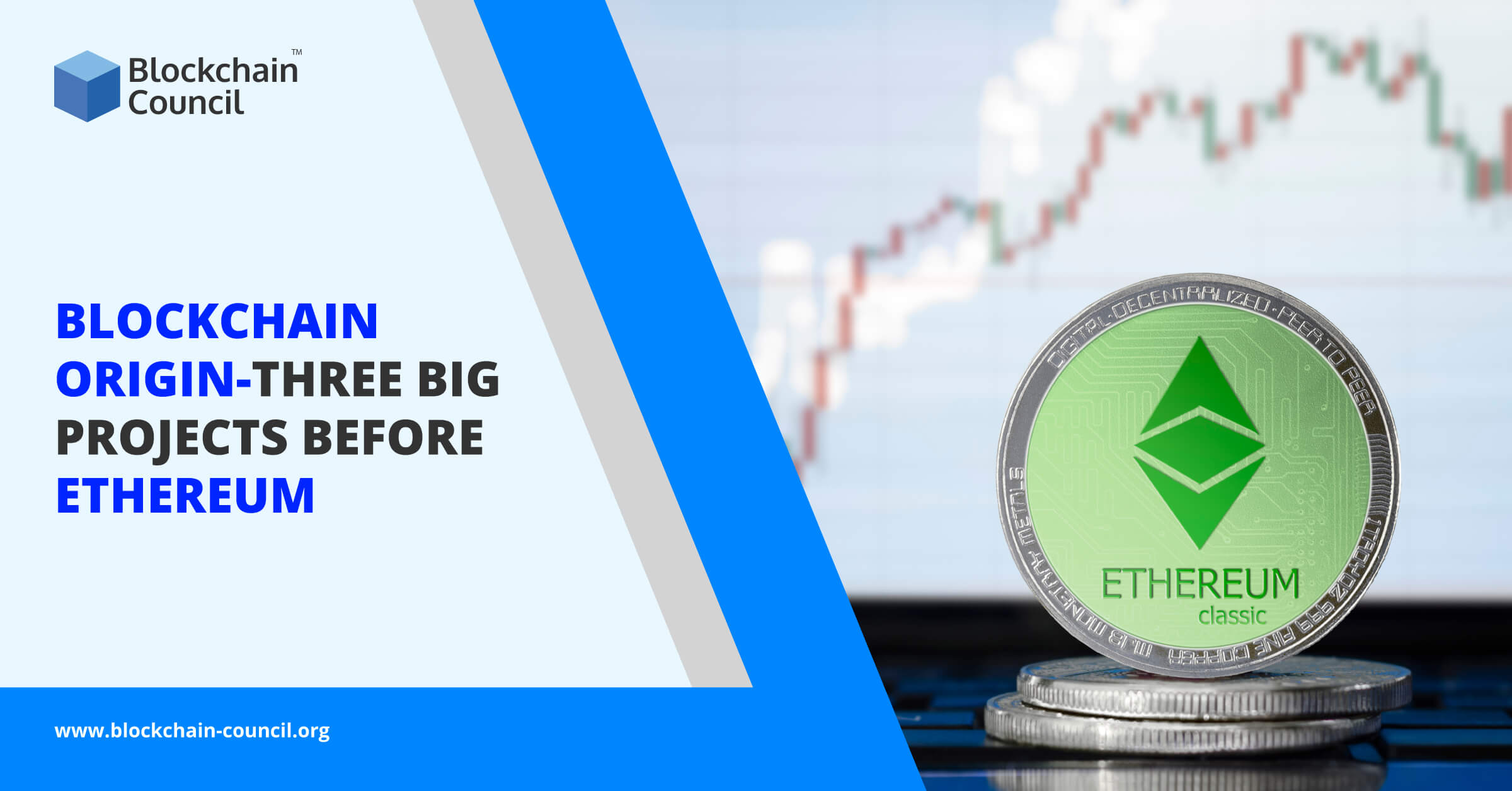 You must have heard a lot about Bitcoin, isn’t it? Curious to learn more about blockchain origin? This article illustrates three big projects before Ethereum and covers the concept of Ethereum and smart contracts.

1.Introduction to Blockchain
2.Origin of Blockchain

Blockchain is a peer-to-peer, decentralized distributed ledger technology that is secured and used to record transactions across many computers. It can also be defined as the record-keeping technology behind the Bitcoin network. But today, blockchain is not just about cryptocurrency. It has impacts on various sectors, from financial to manufacturing as well as education and many others. Blockchain aims to allow digital information to be recorded securely and distributed but not edited.

In 1991, blockchain came into existence, and since then, the technology has gone through various amendments and has led to the introduction of various advanced platforms such as Ethereum. After Bitcoin, if there is something that has created a buzz in the market, then its Ethereum Blockchain platform. Vitalik Buterin invented Ethereum in 2013, and since then, Ethereum experts and Ethereum developers have been on a constant rise.

In 1991, the first work on a cryptographically secured chain of blocks was described by Stuart Haber and W. Scott Stornetta. In 2008, Nakamoto conceptualized the first blockchain from where the technology has developed and found its way into various applications beyond cryptocurrencies.

Now, as we have understood what blockchain technology is, let’s look at different blockchain platforms before Ethereum. These are Namecoin, Coloredcoins, Metacoins.

Namecoin was the first fork of Bitcoin that was created in 2010. It is the first coin to implement merged mining, and one of the oldest blockchain projects. It is defined as an experimental open-source technology that improves decentralization, security, censorship resistance, privacy, and speed of Internet infrastructures such as DNS and identities. Like bitcoins, Namecoin names are difficult to control or comprehend.

Colored coins were introduced to issue and transfer assets on the Bitcoin blockchain. A colored coin can be issued to represent anything of value, including stocks, commodities, real estate, other cryptocurrencies, or anything other. They were introduced to serve as a protocol that would allow users to create their own cryptocurrencies on the Bitcoin blockchain. These are secured as bitcoins, though, since technically, they are still bitcoins.

As we already mentioned, after Bitcoin, if there is something that has created a buzz in the market, its Ethereum Blockchain platform.

Launched in 2015, it is a global, open-source platform for decentralized applications(dApps). It enables users to write code that controls digital value, runs exactly as programmed, and is accessible globally. It is the world’s programmable blockchain and has a native cryptocurrency called Ether (ETH). It is programmable, which indicates that developers can use it to build various applications. Ethereum is a whole network with its own Internet browser, coding language, and payment system.

The significant advantage of this blockchain platform is that it is entirely immune to any third party interventions. This eliminates possibilities of fraud, corruption, and makes the network tamper-proof. Moreover, due to decentralization, there is no possible single point of failure.

Ethereum is a platform that is built specifically for creating smart contracts. A smart contract is defined as a piece of code running on Ethereum. It’s called a “contract” because the code that runs on the Ethereum platform can control valuable things such as ETH or any other digital assets. Smart contracts allow users to solve several problems in a trustless fashion. The only thing one has to rely on is the execution of the computer code.

They are named smart contracts because you can write “contracts” that are automatically executed when the desired conditions are met.

Ethereum is a decentralized platform for monetary transactions and building dApps with accessibility all over the world. The platform has the potential of opening up the world of dApps, even for people who don’t have a technical background. Ethereum blockchain can soon become a revolutionary leap for Blockchain technology that will bring it closer to mass-adoption.

How Blockchain Projects are Collaborating with Government?
Scroll to top