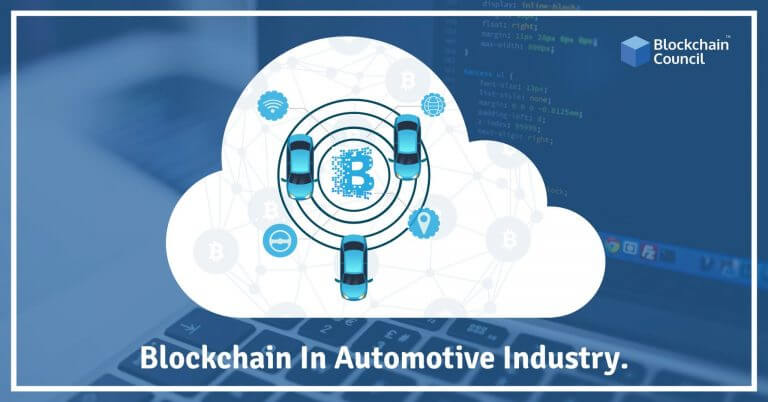 The Blockchain is disrupting every industry radically and is also paving the way to lay the foundation stone for a new industrial transformation. There are many changes that have emerged in the last decade especially after the surge of cryptocurrencies and Blockchain. It was in 2009 when Bitcoin shook the digital transaction industry. Blockchain formed the core of this, but it later emerged as a separate entity that could support other business operations. Some of the popular areas where Blockchain is finding application include retail, supply chain, financial transaction, healthcare, education, etc. Another industry that got added to this list is the automotive industry. Being one of the largest and fastest growing industry, there can be many areas where we can find Blockchain application. Read further to know how Blockchain is influencing the automotive industry.

Some data worth watching

As per the study of Frost and Sullivan, by 2025 we will have 10-15% of connected vehicle transaction on Blockchain. One of the biggest names in the automotive industry, Toyota is working along with MIT to explore Blockchain technology application in creating a new mobility ecosystem which will boost the autonomous driving technology, usage-based insurance, and care ride and sharing transaction, etc. Another development in this field came in 2017 when German supplier ZF and IBM came up with Car eWallet. This wallet was developed for car companies and service providers for management of parking, toll, car sharing, electric charging, and in-car services. These are just a few of the developments that have taken place in the last few years while many continue to grow in the times to come.

What are the key features of Blockchain that automakers can explore?

The Blockchain is basically a ledger which is functions as information storage where time-stamped data is present. Since every entry is associated with time and is visible to the people in the network, it becomes easy for them to cross-check the data and at the same time, it reduces the probability of data hacking, alteration, and deletion.

All these features of Blockchain fall in the following categories:

These features make Blockchain one of the most multifaceted technology thereby enabling the formation of a system which can guarantee transparency and data security.

Blockchain will add a new chapter of innovation in the automotive industry:

When it comes to Blockchain application in the automotive industry, then it has added a new chapter of innovation in technology. As compared to earlier times, Blockchain will create a more transparent and efficient platform where vehicles can integrate. Moreover, when it comes to spare parts of vehicles, then Blockchain can prove beneficial here as well. Provenance, transparency, and security are the key factors that make Blockchain one of the most inevitable technologies today.

Here are some areas of application of Blockchain technology:

Authentication of parts- Counterfeit auto parts which look almost similar to original parts sometimes get into the supply chain and end up at dealers place. These parts are not original and may affect the performance of the vehicle which can damage the reputation of the supplier and the dealer. Well, to avoid this we can make use of Blockchain. Since it becomes easy to track and trace any information in the system and it is difficult to alter the data, once the product is dispatched from the supplier to the dealer, the entire cycle can be easily traced thereby reducing the probability of counterfeit parts replacing the original parts.

Renault has taken a step in this direction; the company has started off with a digitized car maintenance program which makes use of Blockchain to log all car repair history.

Tracking of the vehicle– One of the unethical practice that has recently become a part of the automotive industry is the sale of showroom vehicle without reporting them. To overcome this problem Blockchain can provide instant transparency.

The carpass project is a platform which facilitates vehicle track making use of digital wallet. This platform makes use of telematics data which monitors how and where a particular car has been driven. This feature will be a valuable addition from the manufacturers to the customers.

Electric Vehicles– This is yet another prominent area which can be explored further using Blockchain technology. As electric cars are gaining popularity, so it will require machine-to-machine infrastructure which will include energy providers, automakers, parts suppliers, charging station owners and obviously the car owners. With the help of Blockchain, we can bring everything on one platform and easily track every information related to this niche.

An example of this is Innogy SE which announced that it has come up with many Blockchain-powered charging stations for electric cars in Germany. It makes use of the e-mobility startup Share&Charge.  This will enable the electric car owners to charge their cars at any of the charging station set up by Innogy SE. The payments for the same will be done using Euros with the Share&Change app.

All we can say after analyzing the Blockchain implementation is that Blcokahin technology is here to stay for long. It offers a multitude of features and benefits making it easy for any industry including the automotive industry to provide a completely new level of efficient and secure business operations while maintaining the trust of the end-user.