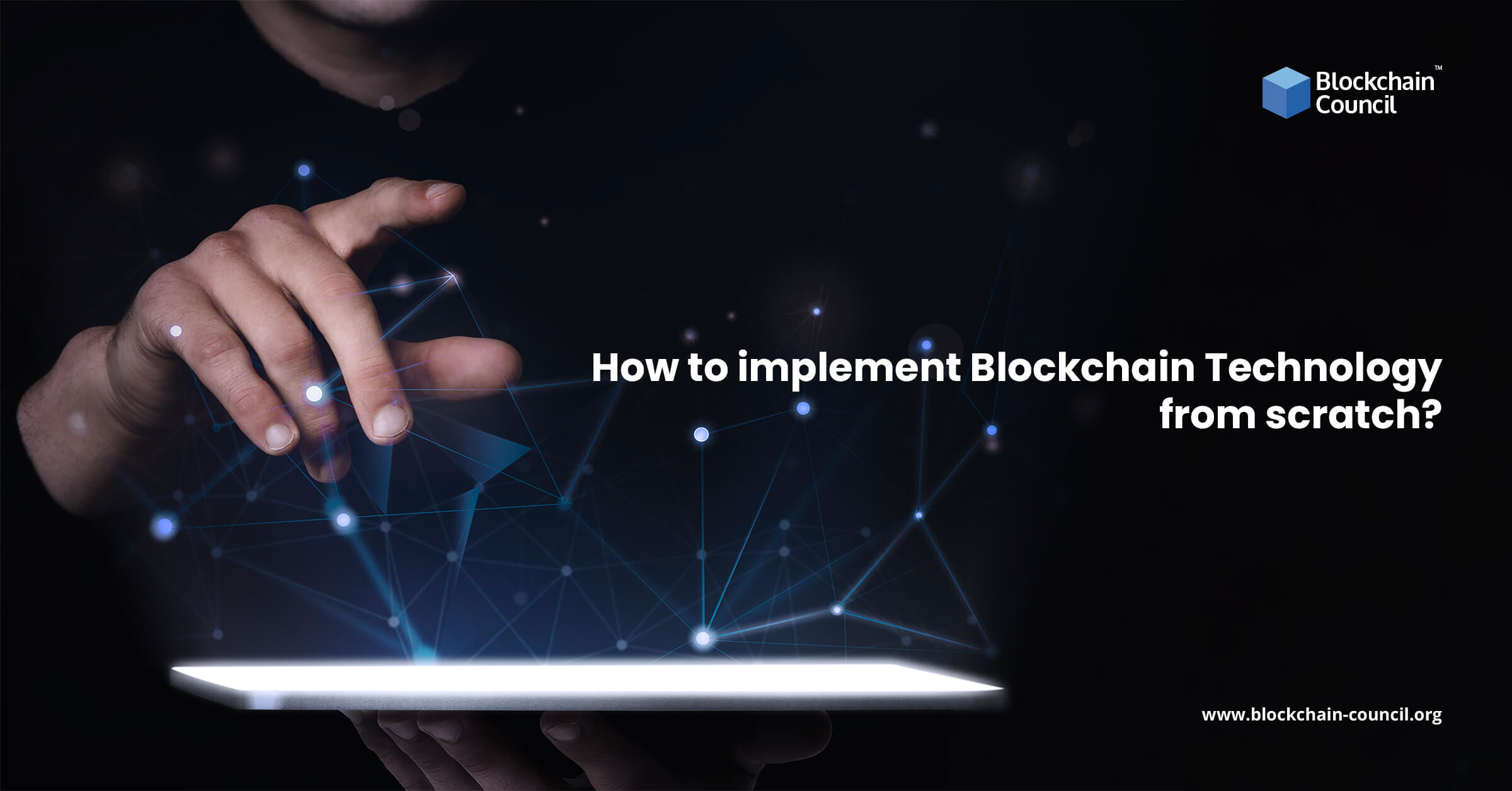 Blockchains are getting increasingly prevalent in today’s marketplaces. Google, Amazon, Microsoft, and other major corporations are already working on blockchain technology services.

You might be wondering why blockchain is garnering so much attention right now. So, what exactly is the big deal?

So, here’s the situation: We can use blockchains to create secure, public, and decentralized ‘databases’ to store any type of data. However, large volumes of data had to be stored and verified by a mediator or intermediary before blockchain.

So, let us first understand how blockchain works before getting through blockchain implementation.

Explaining Blockchain and its Advantages

Consider a digital ledger made up entirely of blocks. A chain is formed by connecting these blocks. Every time someone wishes to conduct a transaction and thereby contribute information to the blockchain, they must create a new block.

When a new block is formed, it is added to the end of the chain, providing an unbroken record of block transactions dating back to the first block ever created.

Unlike most data written and then overwritten by traditional digital ledgers, the benefit of such a system is that a complete record of transactions is visible to all.

Now that we’ve covered the basics let’s look at the benefits of blockchain:

A bitcoin or any other crypto payment gateway can greatly benefit any application or website that sells things, charges membership or subscription fees, accepts donations, or accepts any other payment type.

Including a bitcoin API in your new app will help you increase revenue by attracting all those who like to pay in bitcoin. Still, it will also save you money because most payment gateway transaction fees are lower than credit card transactions fees levied by banks, etc.

Because cryptocurrencies such as bitcoin allow for anonymous transactions, governments, and CEOs of all industries affected by these digital currencies quickly dismiss bitcoin as a tool primarily for drug dealers. However, this isn’t the case.

Allowing clients to pay in bitcoin has a lot of advantages for many businesses, especially those that provide confidential services. In addition, because most consumers do not want such purchases to appear on their monthly credit card statements, cryptocurrency is generally regarded as a much-welcomed mode of payment.

As advocated by organizations like the Ethereum Project, smart contracts provide businesses with a vast array of tools to help them customize their initiatives. In addition, smart contracts enable two or more parties to create legally binding agreements.

These contracts provide far greater privacy and security and nullify the need for a third party, such as a lawyer, to assist in the transaction.

The contract can include a list of fulfilment criteria. Once these are met, the contract will automatically launch a series of actions, eliminating the need for manual intervention. Actions can range from making a payment to verifying documents, among other things.

Smart contracts can be used to make a wide range of transactions possible. They are expected to automate several operations in institutions ranging from finance to medical research.

As a result, many prominent blockchain developers are now focusing on smart contract development.

The Ethereum Project has already done a lot of the heavy lifting of smart contracts. This means that small and medium-sized organizations can start incorporating blockchain-based smart contracts into their projects without hiring large development teams.

Securing IoT networks is another fascinating option that many firms are currently exploring incorporating blockchain into their operations. The Internet of Things (IoT) allows smart device networks to be interconnected to benefit consumers.

The Internet of Things (IoT) is already familiar to most of us because of its applications in many of the processes like our smartphones to control other devices, such as our televisions.

You benefit from using an IoT network every time you connect your phone with an external speaker. And that’s only the most basic example.

Because globalization raises the demand for service integration across domains and regions, identity management software is becoming increasingly vital.

Adding a blockchain-based ID solution to your app will assist in securing its security and convince customers that they are in good hands when using it.

While this may not appear to be a major selling point today, the massive increase in data breaches, such as the Facebook breach in September 2018 that exposed 50 million user accounts, raises awareness about the critical need for ID security.

Whether you have the resources to build your own blockchain-based ID security solution from the ground up or just integrate an existing blockchain ID solution like Validated ID, providing such a safe solution will undoubtedly help you stand out from the crowd.

Banks are complicated organizations with multiple arms or divisions that enable them to conduct business in various financial areas.

Banks can provide client services such as loans, mortgages, and other financial products while simultaneously performing trade financing and other activities.

Aside from the hotly discussed benefits of banks launching their own coins, they stand to gain a lot from blockchain technologies like smart contracts and blockchain-based IoT networks.

Smart contracts can automate many of their critical processes. Mortgages are one such example. For example, when a consumer finds a land, they want to buy, they may approach the bank, which will set up a smart contract for them.

Because the bank already has the customer’s whole account history, the smart contract determining their appropriateness for the required mortgage would be the first step. The contract might then initiate a payment to the seller for the property on verification of documents.

This would result in the transfer of deeds to the buyer and the automatic mortgage repayments initiation from the buyer’s account.

These would continue until the mortgage was paid off in full, at which point the smart contract would turn off the payments and terminate the deal.

By eliminating the administrative human resources required to handle such transactions manually, automation of this procedure might save banks tens of millions of dollars each year. Smart contracts would also reduce the possibility of errors.

Given that blockchain is a specialist technology, you’re probably anticipating a lengthy process if you try to integrate it into your company. Therefore, you should meticulously plan such a job.

This planning exercise takes into account several factors, including:

Aren’t you curious about how businesses worldwide view blockchain and whether they plan to invest in it? Businesses are, certainly, heavily investing in blockchain!

Growth areas will drive this expansion, and a Grand View Research analysis identifies a few significant ones. The following are a few examples:

Many businesses are adopting blockchain, and you might benefit from it as well!

The truth is that most businesses have operations that could benefit from the increased security and automation that blockchain technologies provide.

Companies can make the entire implementation of blockchain solutions go more smoothly if they hire the best development team available. After all, developers are still critical to the success of your project.

If you aspire to get a blockchain certification and become a blockchain professional, then you can search out for various online courses available. However, to save your time and efforts, Blockchain Council is available at your service.

NFT- The new hype on blockchain
Scroll to top