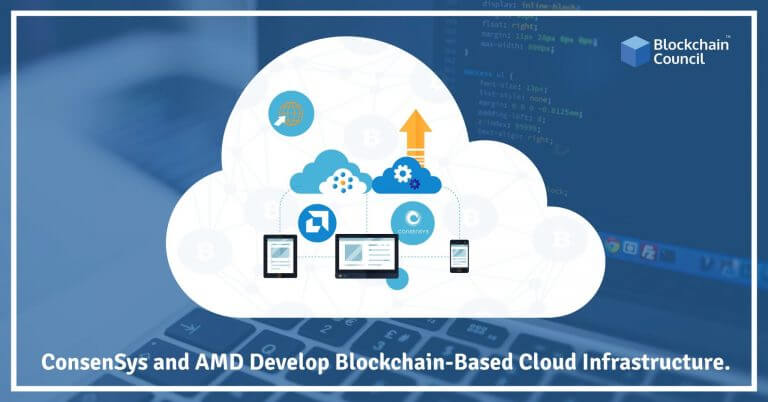 2018 saw the blockchain space focus on developing the core applications of the technology along with strengthening partnerships with blue-chip companies. As the price movement swung in the opposite direction, legitimate projects in the crypto space worked on making their products more secure, reliable and faster. ConsenSys is a leading blockchain company and is one of the leading examples of the scenario described above. With its latest partnership with Advanced Micro Devices and Abu Dhabi-based investment firm Halo Holdings, ConsenSys is looking to build solid value in the blockchain space in 2019. Here’s a look at the partnership “W3BCLOUD” and see how it will impact the current cloud infrastructure.

The Partnership To Support Web 3.0

One of the biggest hurdles in achieving wider adoption for blockchain products is the performance barrier that public blockchains have. W3BCLOUD is the answer to low throughput and slow transactions as its being designed to run on enterprise-grade hardware with inputs from the leading blockchain engineers. Consensys founder and CEO Joe Lubin is one of the founders of Ethereum and is, therefore, one of the most experienced blockchain developers in the world. With W3BCLOUD, Lubin’s goal is to build data center products to support blockchain workloads and applications. The second part of the puzzle, Halo Holdings will raise money for the joint venture owing to its experience as an investment firm. The third and final part of the puzzle is the chip manufacturer Advanced Micro Devices. AMD’s experience as one of the leading SOC (System On A Chip) manufacturers in the world also comes in handy with the pursuit of developing a high-performance cloud computing platform. However, the real reason for opting to choose AMD over NVIDIA is the design philosophy that AMD has maintained for blockchain technology over the years. AMD has its own blockchain technology department headed by Joerg Roskowetz who has a lot of experience with blockchains and smart contracts internationally. In a recent statement, Roskowetz claimed that AMD is fully committed to providing ConsenSys “with access to high-performance hardware technologies capable of better scaling and proliferating decentralized networks and services to meet the growing interest from large corporations and governments looking to tackle challenges ranging from smart identity, enterprise data centers and health ID tracking, to licensing and supply chain management.” All of the three companies involved in the project are committed to the success of the project and to see the proliferation of Web 3.0 in 2019 and in the coming years.

The Power of Blockchain Based Cloud Compute

Project lead for W3BCLOUD, Maggie Love claims that with this project, their main goal is to build the future stack of blockchain compute which will help usher in the era of a decentralized internet. Referred to as “Web 3.0,” the concept of a decentralized internet came into being after the advent of the blockchain to keep the internet more open and fair. Maggie Love claims that W3BCLOUD will add an extra blanket of security to the existing blockchain platforms because of the enterprise-grade hardware that will be used in their servers. Additionally, W3BCLOUD will be able to handle the heavy computing workloads of large enterprises and government while at the same time extending its security throughout the stack due to its robust architecture.

To understand how blockchain based cloud computing can solve real-world problems, let’s consider the following scenario. Currently, when users upload their private media such pictures to the cloud, like DropBox or Google Drive, the service makes multiple copies of the picture and store it in different data centers around the world for quick delivery upon request. In this scenario, since most of the management is being done under the hood, the user really has no idea how their private files are being stored and copied. A blockchain based storage that can provide enterprise-grade throughput could add a lot of security in this scenario. File storage platform Sia stores files in a very secure manner diving up the file in many pieces and only storing small chunks at any given location. Therefore no one can access the complete file unless they are authorized to do so. With blockchains, we can also use this mechanism to secure sensitive files like medical records, bank accounts, passwords, etc.