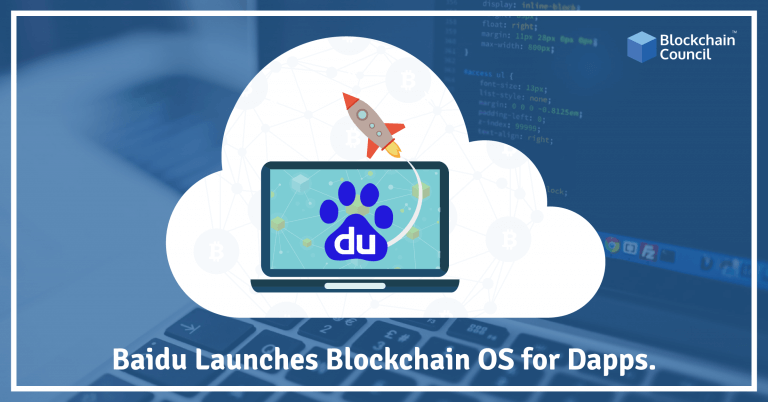 The blockchain is one of the latest technological development that has piqued the interest of every company. From manufacturing to retail, every business operations is affected by Blockchain. This distributed ledger technology has brought in new transformation in which the way business functions. The influence of Blockchain can be deciphered from the fact that China that once condemned the use of this technology and cryptocurrency has shown interest in this technology and is promoting its usage and development. Baidu, the search engine from China has announced the launch of Blockchain OS for Dapp’s development. Read ahead to know more on this news.

What is China doing?

China has recently shown an inclination towards Blockchain technology. Not only it is promoting the use of Blockchain in different aspects of businesses, but at the same time, the country has also approved Blockchain application in its legal system. This is a revolutionary change.

The recent announcement came on February 14th, 2019 when Baidu (Chinese search engine) announced the launching of Baidu Blockchain Engine or BBE. This is an operating system for the development of decentralized applications of Dapps.

This new technology will be based on ABC technology and will leverage its functionalities using Artificial Intelligence, cloud computing, and Big Data. The amalgamation of all these states of the art technology will make the system advanced and efficient.

The cloud computing part will enable the developers to build decentralized apps similar to mobile apps.

What is the objective behind this?

With the help of cloud base platform, the company will address the problem of high data storage, take care of computing bottlenecks and inefficient single-machine storage which currently affects the Blockchain platform.

Why are companies emphasizing on Blockchain technology?

The Blockchain is a distributed ledger technology that aims at providing a platform which has all the features that will make the system efficient.

Currently, we are working in conventional technology and Blockchain is at infancy. Thus, we need a system in place that can guarantee the creation of a platform that leverages all the benefits and removes the bottleneck.

All these factors are a must when we wish to create a fullproof platform. But as interesting it may sound, Blockchain based applications and platforms come with its own set of drawbacks. Like mentioned above, inefficient data storage is a common problem associated with Blockchain. Till now we have seen the use of Blockchain in either pilot projects or only a part of the business operations. The problem arises when we sync Blockchain in mainstream business functionalities which cater to millions and millions of data every day. We still need to know whether or not Blockchain would be able to handle this movement.

Baidu’s attempt to amalgamate Blockchain with AI, cloud computing and Big Data shows that this new platform will be leveraging its services by removing all the bottlenecks that currently surrounds this technology.

One thing that people often miss when they talk about Blockchain is that data storage is a part of DLT and not its main function. The primary function of Blockchain is to provide a platform for data exchange. However, if we sync this technology with Blockchain, then we can expect some revolutionary transformation in the application of DLT.

There is a lot of buzz surrounding Blockchain. Not only it is showing a steady pace of growth, but more and more nations are inclining towards using this technology. Companies are trying to decipher ways in which they can sync Blockchain with their core business operations. China has always been aggressive as far as new technological development is concerned, and its latest move to implement Blockchain with its search engine is one such attempt. Additionally, the country is also favoring Blockchain startups by providing them a favorable ecosystem of growth and development.