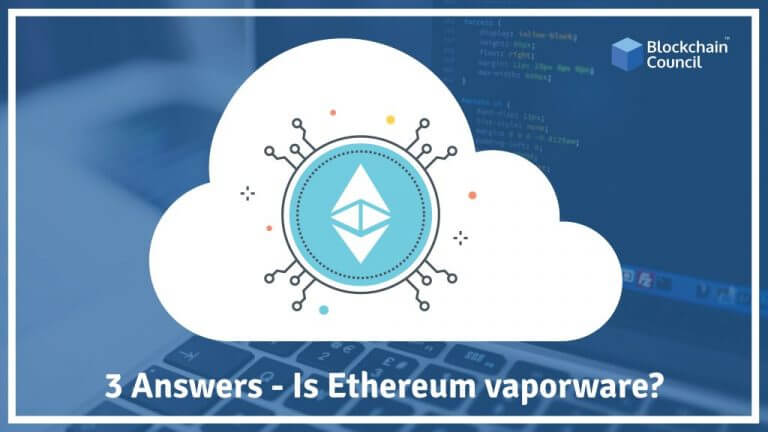 If there is something that has managed to garner the attention of the world, then it has to be cryptocurrencies. You would hardly find a day gone without an update from this zone. When we are talking about the digital currencies, then it’s not the only bitcoin. Instead, there are many others in the league. We have other currencies that have cropped up and are making an impact on the world. Here I will be talking about Ethereum. Although, it’s quite some time we have it in the market, yet people are comparing it to vapourware. Before heading further, it would be better to get a brief overview on this and also learn what vapourware is.

It is an open-source public Blockchain based on a computing platform that came into existence in the year 2013. It was open for crowdsale in 2014. The value of Ethereum grew by 13,000 percent in the year 2017. However, despite, the rising value, it seems to be a part of the controversy. It is considered to be vaporware as most of its developments are still not the part of the practical world. However, if the propagators of this currency are to be believed, then Ethetreum is not a vapourware.

Ethereum has a backup of some of the major global corporations. These include names like JP Morgan, Intel, and Microsoft. These companies are investing to make Ethereum useful for the general public. The most significant drawback of any cryptocurrency and Blockchain is that its still not a part of the mainstream and is not directly of use for the general public.

If compared with the internet, then it was inaccessible during the early days till the time Netscape came along. Well, with Ethereum, we still don’t have its Netscape, and hence it is still in the development stage. Thus, many people believe it to be a vapourware.

Well, I have mentioned a lot about Vapourware; it might have left you wondering what is this term all about? You would often hear this term for cryptocurrency project which has no explicit use as of now.  However, if you visit the Ethereum website, you will defiantly have reasons to believe that it’s not a vapourware anymore.

To sum in simple words, Vaporware can be a software or hardware which has been promoted, but it’s not yet available to buy. The reason for the same could be either because the project is still a concept or in the stage of development. In the current context, this definition applies to most of the ICOs including Ethereum.

Why people are calling Ethtereum a vapourware-

Although, we have many big names investing in Ethetreum and backing it up. But, we still don’t have any mainstream use cases of the same. We have the following projects in pipeline and under development –

40 banks are testing its application via Microsoft. It has produced a return of more than 10,000 percent since the time of its launch on 30th July 2015.
It will lead to decentralization of banks,
It will cut down the banking fee,
It will find application in voting, contract,s insurance, property conveyance, birth registration and many other uses.
It will be transparent and incorruptible.
It has received 3rd highest crowdfunding and has raised more than $21 million during the pre-launch.
If you take a closer look at the development till now, most of them are in initiation phase, and the use cases of the same are still at a very nascent stage. Thus, it’s too early to predict where it’s a vapourware or not.

However, the kind of response, it has received, and the growth Ethereum has shown in the last one year, it is a promising concept.

It remains a debatable question, whether or not Ethereum is a vapourware. I believe there is a difference between Ethereum and stamp coins. I think that this digital currency has offered some actual innovations and has got money from many investors, thus don’t believe that it’s a vapourware. However, when it comes to its practical application, then this currency has managed to get sufficient funds for its future projects.

How is Blockchain different from Database?
Scroll to top