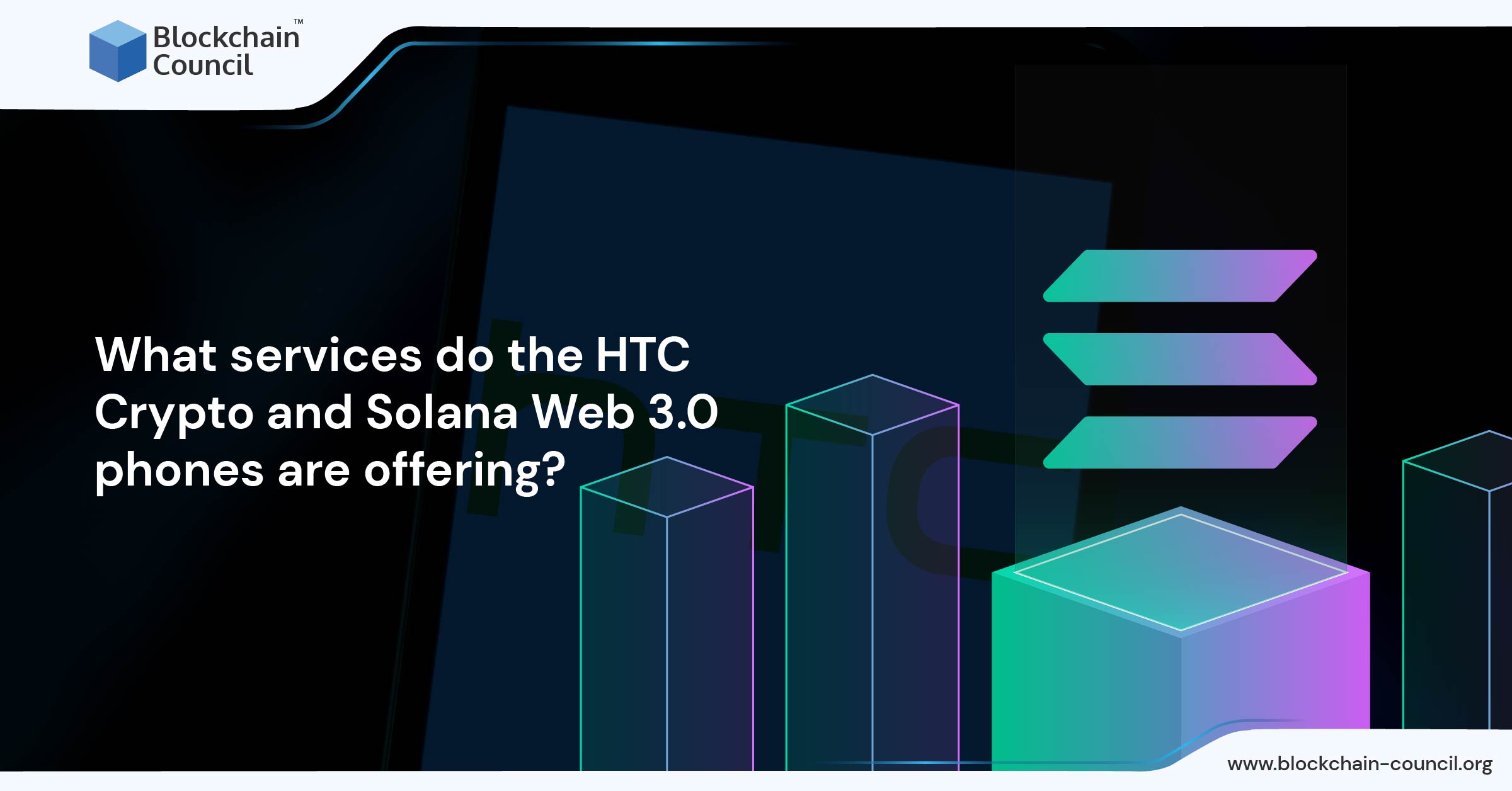 Blockchain-based decentralized applications are poised to rule the world. Instead of being run on the private servers of major tech companies, these applications will be run on open peer-to-peer networks. There are currently web3 and crypto phones that are attracting a lot of attention to support these dapps.

Numerous mobile gadgets focused on cryptocurrencies and web 3.0 are currently available or will soon be available. Samsung has announced that the Galaxy S10 would include a secure method for storing bitcoin private keys, making it a crucial player in the new game. It joins businesses like HTC, which has been marketing Exodus 1 for a while. Sirin Labs, which produced Finney using the proceeds from a significant initial coin offering (ICO). Additionally, Electroneum, which has just started selling an Android phone that can mine bitcoin.

Before moving ahead, let’s analyse these crypto-enabled phones:

Cryptophones are a type of communication device that uses an extra layer of security to minimize the possibility that voice and data transfers may be intercepted while a live conversation is taking place. These are suited for usage in a variety of corporate contexts, as well as for high-profile government officials and intelligence agents.

The majority of cryptophone designs use a technique that involves signal encryption. Additionally, it is difficult to control the interception or translate it into usable data, usually with the aid of a cryptographic chip.

The Cryptocurrency Capabilities of the HTC Exodus

It seems that HTC has a long-term perspective on how mobile technology and cryptocurrencies will work together in the future. HTC Exodus is one such model that has two key cryptocurrency features.

So far, no announcement has been made on the cryptocurrencies that can be kept in the wallet; nevertheless, it is highly expected that support will be included for Ethereum and Bitcoin.

CryptoKitties, The installation of a collectible cryptocurrency-based game called CryptoKitties, is going to be the second feature that will be available. If you play this game, you may breed kittens, trade them with other players, and even sell unusual kittens for bitcoin.

When two CryptoKitties mate, a new, one-of-a-kind kitten will be born into the world thanks to a process of random generation. Because the blockchain verifies everything, there is no way to trick the system or create duplicate kittens because there are no two kittens that are identical to one another. CryptoKitties may seem like nothing more than a harmless diversion to the majority of its players. Still, others take the trading, breeding, purchasing, and selling of their virtual kittens quite seriously.

It appears that this is all there is to it when it comes to what makes the HTC Exodus a “blockchain” phone. In the not too distant future, HTC intends for blockchain phones to serve as the entry point for preserving one’s digital identity.

HTC predicts that in the not-too-distant future, your smartphone will be able to store crucial documents such as your passport, driver’s license, and wallet. You will be the only person who can unlock it, making it significantly more secure than paper papers. As of right now, all of that is nothing more than a concept, which means that the HTC Exodus is a long way from reaching even near to fulfilling HTC’s initial goal.

Crypto Wallets There’s also the concern about what happens if you misplace your gadget. What would transpire to your cryptocurrency possessions if your phone, which serves as your wallet, got stolen? This is not the best possible solution for creating hardware backups, and I’m sure HTC has some ideas and proposals in mind already. The vast majority of people who utilize hardware wallets will store them in a safe or another similarly secure location.

It is sometimes unproductive to carry your hardware wallet around with you. Hardware wallets for cryptocurrencies are susceptible to damage, in contrast to traditional wallets for cash. In the event that it fails when you do not have a backup, you will lose your money and there would be no way for you to get it back.

With the release of a brand new WEB3 development kit and the impending arrival of its flagship smartphone, Solana is actively pursuing an expansion into the mobile market. The eponymous blockchain and cryptocurrency token developers, Solana Labs, have revealed that they intend to introduce their own blockchain-enabled smartphone, which will run on Android and be given the name “Solana Saga,” onto the market by the year 2023. It intends to improve partnerships amongst cryptographic mobile devices.

Solana is not developing their new smartphone from the ground up; instead, they are developing a customized model of an existing product called the OSOM OV1. In point of fact, the latter is the first smartphone made by engineers and designers from Essential, a company that Andy Rubin co-founded but has since shut down operations.
Yakovenko did not just declare the debut of Saga; he also informed the launch of the Solana Mobile Stack, a web3 layer for Solana that operates on the phone.

The Solana Mobile Stack (SMS) is a software development kit that is open source and designed to assist programmers in the creation of native Android applications that make use of the Solana blockchain. It includes a Mobile Wallet Adapter, a protocol-based adapter that can be inserted into mobile Solana wallets. It is designed to function on any mobile device, not only Android ones, so don’t limit yourself to just them. Seed Vault will be enabled thanks to Saga’s secure element hardware module, which safeguards users’ private information from being hacked or otherwise compromised.

Aside from this, SMS aims to allow new functionality such as more comfortable mobile transactions on Solana, minting (i.e., creating and distributing) of NFT assets, wider-spread permit to Solana’s DeFi protocols, and more ways to play Solana-based Web3 video games. In addition, SMS aims to encourage new functionality, such as easier mobile dealings on Solana. People who are developing apps with it will have access to a $10 million developer fund, and SMS will cooperate with cryptocurrency firms such as FTX, Phantom, and Magic Eden.

Because decentralized applications (dApps) and wallets are unquestionably going to be the next big thing shortly, having an actual cryptocurrency wallet incorporated into your phone might be one of the most excellent methods for web3 devices. Consequently, it is prudent to invest money into developing these technologies. Even though many cryptocurrencies already have mobile wallets, such as Bitcoin’s BTC app, no other cryptocurrency project has yet introduced its very own hardware wallet until now. This is something that Solana has made feasible with the launch of its new SAGA gadget. To that end, Solana Saga will deliver its users with a safe “vault” for holding their confidential cryptographic keys, a mobile wallet adapter for linking external wallets to the Solana wallet, a QR-based “Solana Pay” attribute for making on-chain crypto payments, and a decentralized apps (dapps) store for accessing a broad spectrum of web3 applications and games.

The Need for Crypto Phones

Do you think it’s a good idea to buy it? If you are interested in cryptocurrencies and have the financial means to purchase one, doing so may be an exciting method to test the waters. If you are already interested in cryptocurrencies, you most likely already have a wallet that you can rely on. The first generation of crypto-enabled smartphones may not offer you too many additional features. The Exodus 1 was described as a “smartphone with a cryptocurrency side gig” in a review that was published in Wired. At this moment, that constitutes about as much of a “blockchain phone” as one can reasonably hope for.

In point of fact, even if these phones become popular, the decentralized web will still primarily exist in the realm of fantasy. The starting stages of building of its underlying infrastructure are presently being carried out. It’s possible that an inflow of new users might result in the creation of attractive new apps, possibly stimulating the construction of new infrastructure. However, the initial generation of blockchain phones can only provide a look into a possible future that is still quite a ways off. This is the best that they can accomplish.

Web 3.0 in New Age Hiring will eliminate the need for Resumes
Scroll to top